Why it makes sense to bike without a helmet

This sub-forum all discussions about this "lively" subject. All topics that are substantially about helmets will be moved here, if not placed here correctly in the first place.
Post Reply
50 posts

Does it matter?
Well, yes, I think it does.
If you produce a graph of "before and after", you need to maintain the same parameters.

If we say there were 2.5M cyclists before the law came in and now there are 1.5M, it means that there has been a 1M drop-off in cyclist numbers of course.

If they're not, it could be why the figures of injury have increased per cyclist.
It could be that the 1.5M cyclists left are, on average, more risk-takers than the overall average of the 2.5M and it has nothing (or little) to do with helmet compulsion.
Mick F. Cornwall
Top

If the missing million are less risk-taking than average, it's harmed a million people who are maybe less likely to engage in other, riskier exercising activities. Very bad.

So helmet compulsion is very bad or very bad and I'm not sure it matters which.
MJR, mostly pedalling 3-speed roadsters. KL+West Norfolk BUG incl social easy rides http://www.klwnbug.co.uk
All the above is CC-By-SA and no other implied copyright license to Cycle magazine.
Top

Yup, agree, that sounds about right. I think I'll use that in conversations with people who insist on haranguing me. 'Helmets are either very bad, or, very bad'

Helmets either make an accident more likely AND/OR they discourage cycling, but we don't know which from those graphs.
It could be both, of course.

Either way, in the fullness of the argument, it makes no difference, so we are in agreement.

In Melbourne surveys revealed 30 more teenagers wearing helmets compared with 623 fewer cycling. In NSW surveys showed 569 more children were wearing helmets compared with 2658 fewer cycling. For adults counted at road sites in NSW a 26% reduction occurred from 1991 to 1993, from 7534 down to 4251. For Brisbane, Perth and Adelaide the census count for cycling to work in 1991 and 1996 shows a drop from 20054 to 14903, representing an approximate 30% drop when population growth is included.

Helmets also increase the accident rate. In the event of an accident they may offer protection but also may increase the risk of contact, compared with a bare head.
Top

Hi all, last month there was a 2 day walking & cycling conference in Adelaide, one of the speakers was Sundance Bilson-Thompson and he spoke eloquently and importantly factually about cycle helmets.
Here is his page https://australian-cyclists-party.org.au/the-facts/
there's a lot of interesting stuff there.
Top

I this graph is true, why don't NZ authorities withdraw the law? 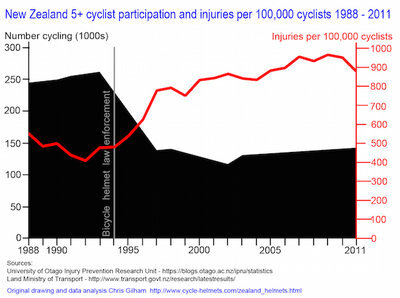 The same reason that when TRL was commission a report on the effectiveness of helmet they found there was evidence to support compulsion, the conclusion drawn by the authors was it was still a good idea to wear helmets.

There wasn't any evidence to support the implmentation of a helmet law in the first place; why should evidence that it doesn't work, make any difference?
“In some ways, it is easier to be a dissident, for then one is without responsibility.”
― Nelson Mandela, Long Walk to Freedom
Top

There wasn't any evidence to support the implmentation of a helmet law in the first place; why should evidence that it doesn't work, make any difference?

Not only that, but NZ's 1994 helmet "law" was actually only a regulation amendment made by a minister, passed without full parliamentary process and I understand without proper consultation. Basically, it seems a helmet convert was a transport minister and they sacrificed NZ cyclists on the altar of their faith.

If that law-making process was marketed as a product to buy, it would probably be called "I Can't Believe It's Not A Banana Republic"!

So no, evidence wasn't a factor. It was a group of people exploiting a brain-damaged child to convert a transport minister and try to stamp out the activity that they blamed for harming the child - rather than blaming the driver of the car that hit him, in a collision that no manufacturer says their helmet is good for. Sick as.
MJR, mostly pedalling 3-speed roadsters. KL+West Norfolk BUG incl social easy rides http://www.klwnbug.co.uk
All the above is CC-By-SA and no other implied copyright license to Cycle magazine.
Top

Interesting, seems to sum up the whole pointless helmet thing! someone with some power/influence, wanting to look good (touchy, feely!) being persuaded by people who have nothing better to do with their lives, and, who have found a 'cause', ruining it for everyone else
Never attribute to malice that which is adequately explained by stupidity
Top

If it's true, why aren't cyclists lobbying the NZ government?
If it's true, why doesn't the whole world know about it it?
Seems to me, that if that graph is true, everybody in the world would do something about it.

Therefore, it's NOT true?

Let's see: almost all the NZ cyclists who fundamentally disagreed with the rule are now not cyclists any more or have found loopholes, so who exactly do you think is going to lobby them? Ex-cyclists? I guess most will have moved on to other things, or other less bike-hating places. NZ's main cycling campaign group, the Cycling Action Network, say it's their lowest priority, below cyclist training, improved crash reporting and investigating how cycling can share space with skateboarding

Mick F wrote:If it's true, why doesn't the whole world know about it it?

And who do you think would be publicising it? Cycling organisations part-staffed by helmet users and part-funded by helmet sellers?

At best, they're divided on it and, at worst, they're imposing helmet rules of their own (UCI/BC). To its credit, the European Cyclists Foundation is doing some good publicising new developments at https://ecf.com/what-we-do/road-safety/ ... on-helmets and https://ecf.com/taxonomy/term/482 but I expect some of its members are a bit uncomfortable about it.

So, there's some big financial reasons not to publicise it, plus a few people who seem to be trying to use bike-bashing to make their political careers and compounded by division among and within the organisations who should be publicising this sort of thing.

Mick F wrote:Seems to me, that if that graph is true, everybody in the world would do something about it.

So what are you going to do about it if that graph is true?

Mick F wrote:Therefore, it's NOT true?

Oh, you're going to dismiss it as not true because not everybody has seen it?

Is truth where the money is?

Your innocence does you credit, Mick. Most of us are cynical enough to doubt that politicians make their decisions guided by facts.
For instance, all the scientists consulted came to the conclusion that shooting badgers is not the best way to halt bovineTB. But the politicians know better.
Before the debate in parliament about seat belt compulsion the DoT commissioned a report on the effect of seat belt laws in other countries. Their expert came to the "wrong" conclusion and the report never saw the light of day.
There is no country where mandating helmets has led to a reduction in the rate of cyclist head injuries. Australia was the same as NZ.
In the USA helmet wearing increased a lot. Here is an extract from the New York Times, a paper noted for the rigour of its fact checking. They use US government figures too.

Millions of parents take it as an article of faith that putting a bicycle helmet on their children, or themselves, will help keep them out of harm's way.

But new data raise questions about that assumption. The number of head injuries sustained in bicycle accidents has increased 10 percent since 1991, even as helmet use has risen sharply, according to figures compiled by the Consumer Product Safety Commission. With ridership declining over the same period, the rate of head injuries among bicyclists has increased 51 percent even as the use of bicycle helmets has become widespread.

If you look below the graph I posted you will see that the numbers are attributed to the NZ government, via the university of Otago.
On the basis of your belief in the integrity of politicians you dismiss these figures.

Helmet laws have been enacted for this reason.

"Something must be done.
This is something.
Lets do it."

You expect the NZ government to say, "we were wrong, lets repeal the law."!

Not innocent, more playing the the innocent.

Mike Sales wrote:You expect the NZ government to say, "we were wrong, lets repeal the law."!

This question should be put to them, and all politicians everywhere.

Mike Sales wrote:One of the reasons I dislike helmet laws is because they divert our attention from what needs to be done.