by Mick F
I know this bar chart has some issues.
It may be wrong a bit, but it's also right in so many ways. 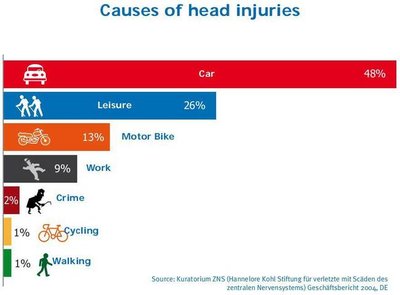 by ossie
Its a shame this thread was moved to some obscure forum due to a few individuals getting on their high horse.

If you don't want to wear a lid in Spain - fair play - don't comment and don't lecture the rest of us that by avoiding the place you will somehow force them to change their legislation. That wasn't the question.

The thread is absolutely pertinent for those tourers wishing to cycle in or through Spain .

ossie wrote:Its a shame this thread was moved to some obscure forum due to a few individuals getting on their high horse.

If you don't want to wear a lid in Spain - fair play - don't comment and don't lecture the rest of us that by avoiding the place you will somehow force them to change their legislation. That wasn't the question.

Contrary to what is implied by the above, it wasn't the non-users who kept going off-topic.

by CJ
This thread still going then? So here's my 2d-worth. I cycle a lot in Spain because it's the foreign language I learned at school, so I've stuck with it in spite of their horrid helmet law. I always wore a helmet for mountain-biking - because that really is a danger sport - so I have one, and I always carry the darned thing in Spain in case I get stopped. I even wear it sometimes: if there's a really long downhill, which is the only time I get up enough speed for its supposedly world-beating ventilation to actually work! Which is why there's a picture of me in a helmet on page 3 (& 41) of the current issue of Cycle!

I never had been stopped though, until this year on Fuerteventura. Two of us in the group were lidless. I thought about arguing that we'd just passed a village sign so technically were in a built-up area and so legally not obliged, plus it was a bit uphill... but quickly thought better of it. The Guardia gave us quite a choice: "you put it on, €100 or I take your wheel". So the fine's gone up a bit - and it was only a few km to our overnight stop. And that was it. I didn't wear the helmet more in the second half of the holiday than I had in the first week (when that photo was taken on Lanzarote) and never got stopped again.

A point worth noting is that the Canary Islands are popular with the 'training camp' kind of cyclist and it is also in Mallorca, the Costa Blanca and certain other areas of Spain where bunches of roadies like to whizz around a lot, that one is likely to get stopped if found pedalling unhelmetted in the countryside. I'd hesitate to say: "no training camps, no risk" but I've never heard of anyone being challenged about this in any 'normal' part of Spain. I guess that where the roads are not thronged with bunches of foreign roadies, a Guardia so seldom sees anyone riding a bike that he forgets about our special little laws.

by Steady rider
The issue of cycle helmets has long been debated because multiple issues are involved, as examples, safety, health and enforcement of mandatory helmet laws (MHLs).
Some protection by wearing a helmet may occur but it is not so simple because research has reported that when accidents occur helmet wearers report hitting their helmet more often than would occur for non-wearers hitting a bare head. Research in 2019 has reported helmet wearers to have a higher accident rate per hour cycled and the reasons could be due to several factors, see;
https://www.researchgate.net/publicatio ... jury_rates
So, assuming some protection may occur in some accidents, it is also evident that there would be more impacts to the helmet and more accidents, especially falls. Therefore, the safety case for wearing a helmet is clearly questionable. Taking Australia as an example, roughly 40 cyclist deaths per year occur in Australia from a population of 25 million, about 8 million ride bikes and includes children. One death per 200,000 cyclists. Even if helmets could help prevent some of these deaths, at a maximize less than one in 200,000 people could benefit in saving lives per year. see
Evaluating Cycling Fatality Risk with a Focus on Cycle Helmet Use Dec. 2018 http://worldtransportjournal.com/wp-con ... 4.4opt.pdf
On the other hand, if 20% fewer people cycle due to MHLs, 1.6 million people would most likely be disadvantaged with increased risk of death due to less exercise.
In 2015 a cost-benefit analysis was provided based on published data and reported;
'The actual risk of serious head injury when cycling is low. The societal health cost factor against the laws is calculated at 109, indicating they cause considerable harm.'
The actual risk of being killed while cycling or suffering a severe head injury is low but the risk of someone being discouraged by having a MHL is high, as examples; Surveys from Melbourne, 1990 to 1991 show 39 more teenagers wearing helmets v 623 fewer cycling and for NSW surveys, 1991 and 1993, show 568 more children wearing helmets v 2658 fewer cycling, see:
Evaluation of Australia's bicycle helmet laws, http://www.cycle-helmets.com/au-assessment-2015.pdf
There is unfortunately no guarantee that the issue will be resolved with various claims and counter claims and the difficulty understanding how extra helmet impacts, a higher accident rate and discouraging cycling has resulted in a negative outcome for Australia. The research claiming a strong result for helmet use is also much weaker than it first appears, see;
Weaknesses with a meta-analysis approach to assessing cycle helmets. Feb 2017 http://worldtransportjournal.com/wp-con ... eb-opt.pdf

Given this information should the helmet law in Spain be tested in the European Court of Justice?

Do the police in Spain carry spanners?

Do the police in Spain carry spanners?

What if you have security skewers? Hopefully with a friend holding the key.

Dunno, but they all certainly carry a gun.
So if you get too clever they can quickly make quite a big hole in your tyre at least!

by Bmblbzzz
Some friends flew to the Costa del Sol a few years ago and rode back. They started on back roads but quickly found these were gravel – they were on road bikes – and the main roads were empty outside the towns. None were wearing helmets. Just short of the French border they got stopped. One had a helmet with him but wasn't wearing it - that satisfied the Guardia - the others were just told to buy helmets in the next town. No fine, no wheel takings. They headed straight for the border - where no one asked about helmets - and that was that. This was a few years ago though.
All times are UTC+01:00
Page 4 of 4
Powered by phpBB® Forum Software © phpBB Limited
https://www.phpbb.com/