For all discussions about this "lively" subject. All topics that are substantially about helmet usage will be moved here.
Post Reply
374 posts

I was in Melbourne in January 2011 and keen to try their "Boris" style bike hire scheme. Helmets are compulsory and as tourists/other city centre users are unlikely to be carrying their helmets around the level of usage was incredibly low. While I was there the city authorities introduced a scheme where you could purchase a helmet for $A5 (about £3.50) from convenience stores. If you returned the helmets (which obviously could not be resold) you got a $A2 refund. Each helmet cost the local authority $A15 making it a loss of $A12 for every returned helmet and $A10 for one kept by the hirer. I emailed the Mayor of Melbourne pointing out this economic madness and got a personal reply acknowledging the stupidity of the Victoria State legislation that made helmets compulsory but rationalising the huge subsidy for helmets being paid by the City Council.

Even with the cheap helmet scheme take up is abysmally low ( my bro in law lives there and reports back after city centre visits) - fines are in excess of $A100 and they are rigorously imposed.

On the plus side I kept my Melbourne Bike Hire helmet - remarkably good quality and in a neat blue. On the basis of my Oz experience I am pro choice and anti compulsion on bike helmets - the more cyclists the safer for all of us (and the fewer cars) but I will usually wear a helmet if cycling in busy area.

I am currently recovering from an encounter with a car 18 months ago which left me with a fractured clavicle (healed) and fractured hip that required a total hip replacement just las week. I was wearing my helmet ( police were keen to ask this and I think it helped reassure them that I was a responsible cyclist - don't know if they asked the 85 year old car driver who knocked me over) but I didn't bang my head.
Top

downfader wrote:I have started a new video playlist for youtube: http://www.youtube.com/user/downfader2# ... 8F4C520094
I hope to add similar videos of interest, or stat based info others have made and collate it.

Brilliant!
The answer to the last question? In a word, prejudice.
For a successful technology, reality must take precedence over public relations, for nature cannot be fooled - Richard Feynman
Top

After four years of slumber I have resurrected this thread due to a quote from Headway's Spokesman Luke Grigg.
“The evidence from Australian and New Zealand is that the number of head and brain injuries from cycling has reduced while cycling has never been more popular.”
http://www.msn.com/en-gb/news/uknews/mo ... li=BBoPWjQ
This strikes me as another porky pie which could be demonstrably so, if not then I can learn from his point.

Popularity first, this suggests a fall in Oz.
http://cycletraveller.com.au/australia/ ... -australia
https://bitre.gov.au/publications/2015/ ... 071_fp.pdf
Difficult to find anything recent in NZ but this shows a fall since the law that continued to 2012.
http://www.transport.govt.nz/assets/Imp ... g-2013.pdf

The death and injury rates seemed to be roughly a constant in NZ and are back to pre-law levels
http://www.transport.govt.nz/assets/Upl ... ng2015.pdf
In Oz they are roughly static in numbers and rising as a 5 of all road deaths and accidents.
https://bitre.gov.au/publications/2015/ ... 071_fp.pdf

cycling has never been more popular.”

Not sure how overall head injuries stack up but injury rates per cyclist have gone up since the NZ helmet law. Playing Devil's Advocate I'd look at whether this was caused by low mileage casual riders giving up cycling hence a higher percentage of riders doing big miles which means more exposure to risk.

The important figure for injuries is per mile cycled which isn't as per the graph. 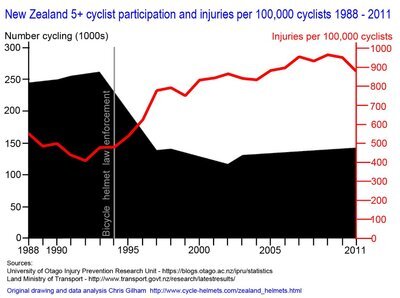 It was reported;
H) Increased risk of injury per cyclist since helmet laws were introduced
Several analyses have compared numbers of injuries with the numbers of cyclists. They all suggest that injuries per cyclist have increased from what would have been expected without helmet laws.
In New Zealand, from 1989 to 2011, average time spent cycling (on roads and footpaths) fell by 79% for children aged 5-12 (from 28 to 6 minutes per person per week) and 81% for 13-17 year olds (52 to 10 mins/person/week).
Adult cycling declined from 8 to 5 minutes/person/week then trended back up to 8 minutes. Graphs of cycle use over time provide strong evidence that the requirement to wear a helmet discouraged cycling.
The reductions in cycling were accompanied by increased injury rates. Between 1989 and 2012, fatal or serious injuries per million hours of cycling increased by 86% for children (from 49 to 91), 181% for teenagers (from 18 to 51) and 64% for adults (from 23 to 38).

For New Zealand it was reported;
This evaluation of NZ’s bicycle helmet law finds it has failed in aspects of promoting cycling, safety, health, accident compensation, environmental issues and civil liberties. It is estimated to cost about 53 lives per year in premature deaths and result in thousands of fines plus legal aspects of discrimination in accident compensation cases.

Most of our data here is only up to 2012, possibly things have changed in the last four years and Headway are more up to date.
Yma o Hyd
Top

meic wrote:Most of our data here is only up to 2012, possibly things have changed in the last four years and Headway are more up to date.

Possibly. I'd place a huge bet they are just wrong though.
Top

Past experience shows they prefer statements that support their cause over ones that are factually correct.
I would however prefer to know that I am factually correct in casting such dispersions on their latest statement.
Yma o Hyd
Top

meic wrote:Past experience shows they prefer statements that support their cause over ones that are factually correct.
I would however prefer to know that I am factually correct in casting such dispersions on their latest statement.

You could ask them for their substantiating evidence.

When measured over the previous month and year there appears to have been a decline in Australian cycling participation since 2011:

I've messaged them with some facts, I wonder if they will heed my request to publicly retract their lies?

Re: RE: Re: Stop Headway

Vorpal wrote:You could ask them for their substantiating evidence.

Did you get a reply?
Entertainer, juvenile, curmudgeon, PoB, 30120
Cycling-of course, but it is far better on a Gillott
We love safety cameras, we hate bullies
Top

Did you get a reply?

Yes I did, a full apology and retraction, oh hang on, that's a lie too.