Tarp and a Tent?

Tarp and a Tent?

Was wondering if anyone tours with both a tarp and a tent? I imagine it's for predominately long distance/term touring where weight and bulk may be less of an issue. Think a tarp could be useful to pitch during the day when resting or expanding your living area when stopped for a couple of days etc etc. Just wondering people's thoughts?
Top

I've never understood why anyone would prefer a tarp to a minimalist tent. What about the midges?
Top

I'd still bring a tent, would also bring a tarp for reasons stated above. Just wondered if people do it.
Top

cant see the point in having both while on tour. I did once try out with my ( heavily over laden trailer ) carry one and use with my that Vaude Mk2 as a front vestibule thing. I have now converted it to use as a tarp cover and use with a bivvy bag. is very light as an alternative to keep off the wind, just for summer use. I hope to try it out on a stealth camping few days soon. so bivvy and tarp? not tent and tarp
Top

It's a good idea, but I suggest use an army poncho instead, can be used as a ground sheet, shelter you from the rain when worn as a cape, emergency bivy, sun shield and last but not least a tarp and are very cheap, tough and durable. If you are wild camping they can go over the bike etc to hide it or use a shield to hide you.

A dedicated tarp can do one only usually.
Top

I must admit I have been looking enviously at car campers with tarps as well as tents. I can see that a tarp might be useful - particularly for cooking and eating if it's raining.

I'm not sure you're right though when you say that weight is less of an issue on long tours: on long tours you need to carry more stuff (eg if your tour starts in the Spring or carries on into the Autumn then you need warmer clothes that you wouldn't carry for a summer tour), but you still need to consider whether additional stuff is worth the extra weight. There are now some very lightweight tarps coming onto the market, but they are very expensive - otherwise you're looking at probably a half a kilo and more, which is a fair chunk of extra weight.

There are tarps that double as ponchos and maybe they are worth considering - although I'm not sure whether they are really big enough. But a poncho is a good thing to have when it is really hammering it down.
Top

Here is my attempt at tent and tarp -

nice idea but in my case a trailer job

That looks to have worked quite well, as tarp porches go, which leaves the added weight as the only real problem. I'd also think about two slightly shorter poles instead of one, so one side of the annexe (downwind) could be open as well.
With most tents, which don't have the handy external pole at the front for attaching the tarp to, you often end up having to fix the tent side of the tarp using long guys stretched over the tent.

As well as cooking shelter for damp weather, you could also use a tarp for shade in hot weather, though that would require either handy trees/shrubbery or several long poles (even more weight).
Top

I've been considering adding a tarp to tent camping for a while, I think it's a good idea for several reasons.

Quick to set up impromptu shade or shelter during the day.
Add an open porch area to tent for rainy weather.
Protect expensive tent flysheet from UV degradation thereby extending tent life.
Emergency shelter if ground is too hard for pegs but there are things to tie tarp to.
If your tent is a bright colour, a green or camo tarp could be useful to reduce visibility when wild camping.

Say an extra kilo for a good quality tarp including pegs and cordage, not too much to add to your load, especially on a long tour.
Top

Mmm yeah I get what you mean with the additional weight. I think my angle of looking at it, however, is that on a long distance tour you may stop for a longer amount of time where having a tarp as an additional shelter/area to sit etc would be a nice advantage. The overall slowness of a long tour would support the idea of a tarp. Also, the ability to put it up during the day for example when it is hot as already mentioned.

Basically, the reason I ask is that I’m beginning an open ended tour in a month, I feel a tarp though not necessarily used every day could become quite a nice piece of equipment to have. I must admit though that would be somewhat of a heavy luxury. The question of how many additional poles to bring would need looking into as well as the actual expense of buying one. DD Hammocks 3m x3m would be the one I bought if anything.

I’m not sure if people have seen the blog travellingtwo? I imagine it’s a pretty well known blog, anyway they wrote quite an interesting article on the value of their tarp as a secondary piece of kit to their tent. Here it is if anything is interested…..

The army poncho idea is a good one as well.
Top

thayer19 wrote:Also, the ability to put it up during the day for example when it is hot as already mentioned.

This is the debate I've been having. The thing is though, if you have some trees handy to put up a tarp, then the chances are that you find a place in the shade under one of them. A tarp would definitely be useful if you are in a campsite that doesn't have trees, but then you'd very likely need a pole to put it up. As a shelter against the rain for cooking it would be a definite advantage.

I've stayed in hundreds of campsites and they have almost always had plenty of places to sit in the shade or out of the rain. The only exception I can think of is one time in Corsica when it rained and rained and rained, and I was trapped in a coffin tent and the only alternative shelter was the toilets.

UV protection is a definite bonus - but I've paid out a load of money for a tent for a very light tent it seems a wee bit self-defeating to then get a tarp that weighs almost as much, to protect it. Yes if you're going somewhere really hot for a very long tour then maybe ...

An extra kilo for something that is really a nice-to-have-but-not-essential seems like quite a lot to me. Split between two, a bit more reasonable.
Last edited by andymiller on 9 Aug 2016, 5:59pm, edited 1 time in total.
Top

The tarp in question is a vango one cost me I think £20 or so. It isnt usable in strong wind I think, would blow away and the pole is rather heavy I think steel rather than alloy. I got hold of some Force Ten poles from Ebay and made my own that reduces the weight some what and also some alloy pegs rather than the bog standard steel rubbish you get. I now have a tarp whose total weight not bad ( the tarp its self dont weigh much ). I turned my single pole vestibule into a low lying tent like tarp with a pole at either end
Top

Was wondering if anyone tours with both a tarp and a tent? I imagine it's for predominately long distance/term touring where weight and bulk may be less of an issue. Think a tarp could be useful to pitch during the day when resting or expanding your living area when stopped for a couple of days etc etc. Just wondering people's thoughts?

It's probably overkill, if is raining that hard you need proper waterproofs and at some point get shelter. Or if the sun is too strong a simple tarp would only give some relief (having enough water would be my biggest issue). Those are really extreme situations, to ponder wisely.

On normal touring, either a tent or a tarp woud suffice. Both can require 5-10 minutes max to be arranged, so I personally don't see the point.

thayer19 wrote:Was wondering if anyone tours with both a tarp and a tent? I imagine it's for predominately long distance/term touring where weight and bulk may be less of an issue. Think a tarp could be useful to pitch during the day when resting or expanding your living area when stopped for a couple of days etc etc. Just wondering people's thoughts?

Yes we do this. The tarp is very useful giving extra dry space outside the tent when the weather is wet. It is also useful for providing shade during the day allowing us to stop when we want rather than having to wait until we find a shady spot. We used to use a Eureka Backpackers tarp which was around 1.2kg but now we use a slightly modified Vango Storm Shelter 800 with a single pole. We did this because it seemed a bit daft to take both a storm shelter and a tarp on trips and we decided that the storm shelter was the thing we needed most.

The Storm Shelter 800 is large enough to go over our kiddie trailer* and two adults when in shelter mode. Very useful if you need to do a nappy change in the rain or want to sit out a particularly heavy shower or have a break on a rainy day without getting wet. We tend to put it up in tarp mode with the tent most nights when on tour.

Edit : Picture of the Storm Shelter in tarp mode with our Macpac Citadel. 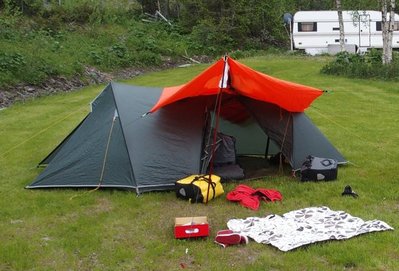 *It is probably big enough to go over two trailers with space for two adults if you put the trailers close enough together.
So long and thanks for all the fish...
Top
Post Reply
16 posts