How much can you expect to pay for a small tent, 1 or 2 persons and a bike or a car on an average campsite. I have checked on various websites and not found much under £10 a night and £8 is about the cheapest I have found.
No jam doughnuts stored here overnight
Top

Between £10-£15 seems the norm although I have been waived a fee before because they thought I was doing something admirable. I have also been offered a 'deal' for £25!
Top

It will depend greatly on where and when you are camping.

For example on a bike with a tiny tent I've paid as little as 4 euros including showers etc. But in a more desirable location (coast/attraction) in high season i've had to take a fully serviced plot at 30 euros plus showers! In my travels I usually budget for @ 20 euros/night, I guess the average is @ 14/5 euros.

Arrive by car and you'll almost certainly add quite a bit to the bill. The C&CC sites have a special hikers/cyclist rate of @ £8 pn for non members. Many sites now charge per person, for your transport, type of accomodation etc so be careful when checking out the tariffs - a cheap plot may well come out quite expensive. By the time you add everything in, things like local tourist taxes and rubbish are often on top of the published prices.
Convention? what's that then?
Airnimal Chameleon touring, Orbit Pro hack, Orbit Photon audax, Focus Mares AX tour, Peugeot Carbon sportive, Owen Blower vintage race - all running Tulio's finest!
Top

This year two of the larger commercial campsites on the Mid Wales coast charge me the least. Both were only £5 per night and the facilities were excellent. Also no noise after 10.30 pm.
There is your way. There is my way. But there is no "the way".
Top

In May cycling round the south west peninsular I paid £10, just west of Weymouth; £9, Brixham; £4.80, just west of Fowey; £13, St Just YHA;
£6, Boscastle; and £8, near Lynton, total of £50.80 for 6 nights camping. I was happy with all the arrangements, some had very good facilities, and some were in particularly beautiful settings (St Just and Boscastle). Think the prices might be higher in July and August.

In Normandy and Brittany cycling in June 2 of us were paying as little as 12 euros and sometimes up to 35 euros (with facilities we didn't need but needed to camp). Camping Municipals still best value and the facilities are as much as we need.

For a long multi-month tour I still recon on around £10 per night camping.
But a lot of it does come down to luck if you can find the cheaper campsites in the area you are in.

But one way to make it cheaper is to do the odd wild camp when the only sites you find are silly expensive.
As long as you leave no trace that you stopped there, I think that's fine.
Top

In this country from £3 for a field in the Brendon Valley with no facilities as such, public toilet in the layby next door and a river for bathing in to £26 for two people at Street YHA.
Top

£10 a night represents fair value to me, any more and I'll more than likely camp somewhere off site. I'd estimate 80% of campsites are under a tenner for a single cycle tourer, though my experience doesn't include the busiest tourist areas in peak times.
Top

The Camping & Caravanning Club sites do a "backpacker" rate on their own sites (over 100 of them) for those who arrive under their own steam & have a policy of not turning away anyone walking or cycling. Last spring I paid £4.50 (member rate, it'll be a couple of quid or so more for non- members) for a night camping on the shore of Loch Lomond. I'm having trouble finding exact prices for this year & I've not done any bike/hike trips to a C&CC site this year. 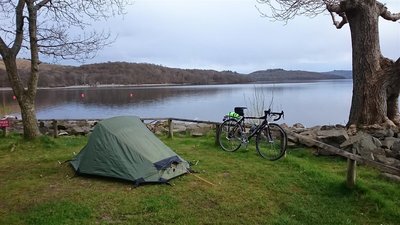 Tigerbiten wrote:But one way to make it cheaper is to do the odd wild camp when the only sites you find are silly expensive.
As long as you leave no trace that you stopped there, I think that's fine.

Agreed. In the USA my limit is around $20. I've been quoted $35 and just politely declined and camped free in a corner of the town park or a forest outside town. Having a simple to set up tent in a dark colour that can be erected in near darkness helps.

I've only once been pulled up for camping in a town park, in Telluride, Colorado. Even then it was in the morning to be told I was in the wrong part of the park. When I arrived after dark there was a performance of Shakespeare on in one bit and some game with glow in the dark balls in another part of the park. I'd just looked for the quietest place.
Top

Many thanks for your replies. I live quite near to Borth so will go there and its a lovely area. We used to camp in a place called Parrog in Newport Bay, Pembrokeshire in the 70s and is still there and there is a good site at Newgale. We used to stop at the Stade Municipals in France which were great and you have got excellent fascilities. I would like to camp in North Devon, Exmoor, Dartmoor and Cornwall and see see some of the holiday parks do camping at a very reasonable rate. I can remember camping at Ullswater in the Lake District which is probably the most scenic site and don't know if its still there. The Loch Lommond site looks great.
No jam doughnuts stored here overnight
Top

As RickH said The Camping & Caravanning Club sites do a "backpacker" rate. Last year this could be between £5 and £9. However, don't confuse them with The Caravan Club, who often want an organ as well as an arm and a leg.
http://www.EuropeByBicycle.com - Country-by-country touring info for 54 European nations and disputed regions
Top

We are just back from a tour in France. For the two of us the typical rate was about 15 euro, but we also paid rather less. I thought it was all very fair. And the campsites (mostly municipal) were really wonderful and almost always very quiet, with a genuine appreciation for people arriving on bikes.
Top

The smaller Camping & Caravanning Club sites seem almost all to be members only, at least in theory.
Top

Bmblbzzz wrote:The smaller Camping & Caravanning Club sites seem almost all to be members only, at least in theory.

They are but you could join to take advantage of them - oh I forgot, can't do that because you should get everything for free.