I guess like most here i'm old enough that when I started camping, the options for crockery were either plastic or metal of some sort, usually steel but later aluminium. Indeed in my cupboard I have examples of both.

I then discovered the Orikaso folding crockery and whilst a little wobbly i've been using them for over a decade. A couple of years ago I became intrigued by the folding silicon stuff, first a kettle but i've added a bowl and cups since. Not as light as the Orikaso but somewhat more stable to use - if weight is crucial I still have the folding stuff.

I have been taking a plastic mug and just bought a stainless steel one that I will use both to heat up liquids and drink from. As for other crockery I have never used it whilst camping, I eat out of my cooking pots or lid/pan.
Top

When on a tour of more than a couple of days it is nice to have a few luxuries, subsequently SWMBO and I tend to carry a plastic plate and bowl each replete with our own individual titanium KFS sets. Although this increases the weight of the overall "package" we are carrying. We also carry a plastic cup each as titanium is not particulary lip friendly. Mrs KTHS insists on carrying a folding (collapsible) lexan wine glass for her evening snifter, and I avail myself of a titanium coffee press for the morning ritual. We have also found that a small folding table is quite handy as are our folding chairs. We were at one stage fans of a superlight approach to cycle camping but as time, backs and knees have got older and our distance between camps has decreased comfort is now a greater priority.
Just remember, when you’re over the hill, you begin to pick up speed.

I don't mind the Orikaso plates, they make life easier as light-duty chopping board or just to prepare a sandwich

One of my favourite things is a £1 wooden spatula, cut an resized, is very good for cooking eggs (plenty of places to buy eggs on the way

) and gently scraping a pot/pan in general 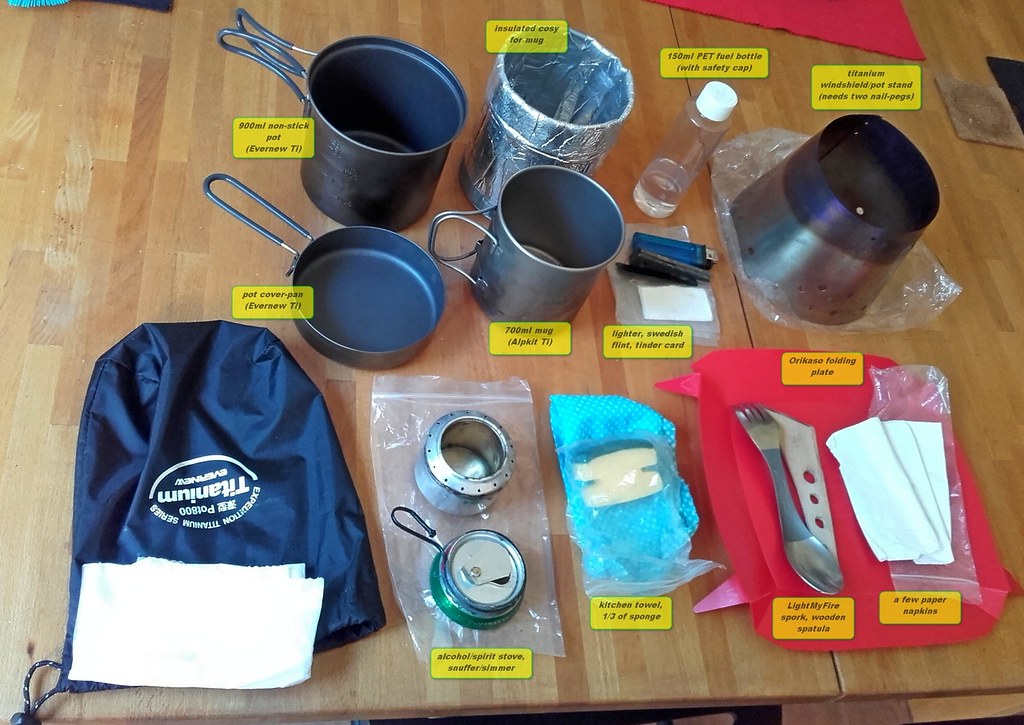 I use the pan (MSR Ti Kettle) and an Orikaso mug and plate
The plate is old enough that it's got poppers at the corners rather than fold-in tabs, and it also has a second set of crease marks so I can use it as a square bowl.
Occasionally, I'll take an insulated mug (Thermos Thermocafe) instead of the Orikaso mug.

The main reason for Orikaso is storage space rather than weight.
When the plate I'm using dies, I'll probably get a Fozzils eqivalent rather than another Orikaso (tabbed) plate.
Top

I seem to have settled for the following:
Use the pot for a drink and later for a meal instead of additional crockery - if I am trying to minimise.
Otherwise, in addition to the pot, a cheap rip-off of the orikaso folding bowl and an 'unbreakable' polycarb 1/2 pint glass. The folding bowl doubles as a cutting board when flat and the 'glass' can be used for wine, beer or a hot drink without lingering taste contaminating the next drink.
Maybe a couple of the folding bowl things would help with cooking so I could do some more interesting food...
Top

"It depends", as usual. Mostly depending on if it's solo, when I'll generally be more spartan and eat out of a pan etc., or whether it's a team affair when passing around a pan isn't always that practical.

Most typically it would be myself and the missus, and we'd have a plastic plate, bowl and mug each. And possibly a plastic "glass" too, for wine or a G&T. Weight is negligible, at least in our particular scheme of things, and as long as one packs with a degree of Cunning the bulk isn't too bad either.

I take a cheap plastic shallow bowl for breakfast and evening meal, and a plastic mug for my cuppas. The bowl can be a little awkward to fit in panniers, I usually have to roll something to fit into it. The mug ends up with the cooker and cutlery in it.
I know you're not talking cutlery, but one of my best ever acquisitions was a pair of small wooden butter knives. They make great mini spatulas!
“My two favourite things in life are libraries and bicycles. They both move people forward without wasting anything. The perfect day: riding a bike to the library.”
― Peter Golkin
Top

I tend to eat out of the pans / pan lid and the only cutlery i take is a spork and maybe a small knife .
Top

I have a stainless steel mug and a plastic bowl. I used to have a plastic mug too but found the stainless steel keeps drinks hot longer, is far nicer to drink from and weighs more or less the same. For cooking I usually take a pot with a lid, which I think is stainless steel too, but sometimes take a rectangular non-stick "mess tin" - no good for boiling as it has no lid, but easier to keep clean. I've also given up on sporks and gone to a set of stainless steel individual cutlery, which fits into a little holder thing. A bit heavy but much more useful for eating with.
Top

I use the stainless steel Scout model of the Kelly Kettle, and just eat out of the pans. The package I got came with two mugs, too. May be too bulky and heavy for most bicycle tourists, but for a complete cooking set for long term touring, that doubles as a tent heater in the winter, I can't fault it. When I tour with it in the Summer, I don't take the kettle bit, which means it's a lot lighter and compact. And the ingenious way everything packs together, where a sooted surface never touches a cooking one, is a constant marvel to me.

1 pan to cook in plus metal mug for drinks plus cooking. Also heavy duty foil tubs. The sort of thing a Chinese take away might come in or some slightly larger ones that things like pre-prepared chicken crowns come in. They can be used to heat food although I have never fried and don't burn through when boiling water. Crap shape though. Eat from them then recycle them at home. Fold up dead flat of course.
Top

For longer tours we like to be "civilised", so as well as two stoves and multiple pans so we can cook real meals we each have a stainless steel mug, a combination plastic bowl/plate, and a round based non-falling-over-on-grass wine/beer plastic glass (we call them our weeble glasses), as well a knife fork and spoon each. It is much easier being well equipped as a couple though.
Top

The idea of being "civilized" for me is to have a towel that can dry quick, for GP of drying stuff out, plus a 1/2 sponge and some biodegradable washing-up liquid. Also a couple of wet-wipes for the quick cleaning when resources like water are low.
As I mostly travel alone, I can eat straight form the pan, which is not great while traveling and cooking for two or more.
Then of course it's all about one's habits and diet, some people are fine eating cold meals, others like to cook a curry from scratch. I tend to stay in the middle, not needing to stop a ride for a brew or to cook 4-course meal, but leaving the cold food only for emergencies and enjoying a warm meal whenever is possible
It is by riding a bicycle that you learn the contours of a country best,
since you have to sweat up the hills and coast down them.
Thus you remember them as they actually are...
Top

RobinS wrote:For longer tours we like to be "civilised", so as well as two stoves and multiple pans so we can cook real meals we each have a stainless steel mug, a combination plastic bowl/plate, and a round based non-falling-over-on-grass wine/beer plastic glass (we call them our weeble glasses), as well a knife fork and spoon each. It is much easier being well equipped as a couple though.

I know the ones you mean. I take one on tour as well. Whereas catering when backpacking is pretty minimalist (eat from the single cooking pot, titanium mug for drinks that can also go on the stove), I like to be a bit more civilised on tour. I have an X plate and bowl, which fold flat and have bases that can be used as chopping boards in a pinch. I also take a knife, fork and spoon in titanium. Weighs next to nothing.
Top
Post Reply
20 posts