What to take on tour = Am I missing anything?

What to take on tour = Am I missing anything?

Just a month away from starting my first tour now and kit etc is starting to come together nicely. Just wanted to ask for any opinions on my kit list and things I might have missed etc! To explain the colour coding briefly, green is bought and in my pack/ready to go, blue is stuff I have but which is used day to day and therefore still needs packing, red is still to buy and orange is stuff I have bought or ordered but which I need to collect when I visit the UK in a few weeks. Grey is things I was planning to take but have since decided not to. The ones I'm really not sure about are the repair kit. I was advised there's not much point taking a chain breaker or cassette remover if I don't know how to use them properly which is the case, but I'm not sure if the cassette remover in particular would be important if I get a flat on the back wheel? The other 3 in grey I was told it wasn't necessary to take as my bike was only new a month ago. Any opinions on this?

Thanks in advance for any help/suggestions!

I need a reminder of where you're planning on going, and how long the tour is...
Top

Travelling throughout Europe, Northern most point is Hamburg, East as far as Krakow and Budapest, South as far as Rome and ending in Barcelona. Most extreme area will be St Gotthards pass in Switzerland. Estimated total distance is around 6000km and will be gone for around 4 months, traveling from mid-May to mid-September =)
Top

You're never going to be that far from a bike shop, so I'd leave most of the tools at home. I'd just take a couple of allen keys and a decent multitool - there are a few threads on here about how much to take with many different opinions! No need to remove the cassette to repair a flat back tyre.

I've tried to cross out the items I would leave at home, I haven't really looked at the clothes section.

In addition to your list I would take:
- a wind shield for the gas stove
- small bottle of clothes washing liquid
- needle and thread
- a pump and inner tube repair kit 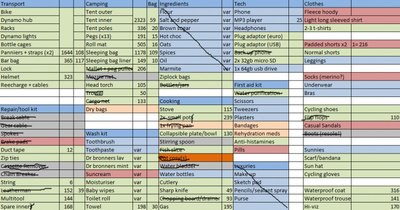 looks fantastic what about cloths line and pegs spare batteries adapter for gas canisters.other than that your all set.have a super tour and i sure hope you don't need the wet gear.
any photos of your bike /gear .

I forgot a few things:

- my luxury item, a Decathlon inflatable pillow!
- a small rectangle of groundsheet can be useful for sitting on wet grass
- waterproof overshoes (specifically, these: http://www.cyclo-randonnee.fr/sur-chaus ... --336.html)
Top

Thanks for both of your sets of suggestions!

Looking at your suggestions of extras has made me realise there's things I have tucked in my kit that I haven't put on the list, for example a mini sewing kit (that I got free in a hotel room literally just a needle, few threads round a piece of cardboard and a couple of safety pins), inflatable pillow that I bought last week following a really uncomfortable nights sleep on a practice trip and the repair kit for flats.

Windshield is on my mental list of things to get/make so will add that to the actual list so I don't forget! For the clothes washing liquid the dr bronners stuff is multi purpose so can be used for clothes, hair, body, dishes and pretty much anything else that needs cleaning - saves taking different bottles of different things =) pump I need to replace as mine is terrible and I'm using my Samsung S4 as map/route tracker etc powered by the hub and reecharge so won't be taking a map holder, watch or cycle computer, just a waterproof case for the phone. As with you my cutlery is one of the light my fire fork at one end spoon at the other things but I couldn't think of a more concise way to put that on the spreadsheet =P

For a clothes line I have the string but hadn't thought of pegs. I'll be staying in hostels one or two nights per week when I go through cities so will probably do most of my washing then. Can use the string as an emergency line but hopefully won't need the pegs!

A few of the other bits you suggest I should leave like the luxuries are as they say luxuries and as an art student the sketch pad and stuff is a pretty big part of the trip for me! =P A few of the others like the back up phone and water purification are things my dad is insisting I take and seeing as he's only borderline ok with me going at all I'm inclined to humour him, at least for the first few weeks while he accepts the fact I'm going to be fine! =P

Also for the gas adaptor, I hopefully will be able to stick with using the fuel my stove takes as standard but I figure if I'm really stuck and only have the option to use something else the chances are I'll also be able to buy the necessary adaptor wherever I'm buying the other fuel? Hopefully? Or I'll eat cold for a few days until I can get the right type of fuel again.

Thanks again for all the suggestions though! Definitely helped me add a few things I'd forgotten to list! =)
Last edited by randomblue on 5 Apr 2014, 9:19pm, edited 1 time in total.
Top

As for photos the only ones I have right now are my tent and a few of my cooking things...

Cutlery in the photo has since been replaced but shows the pots, folding cup, folding plate and pot cosys.

Have a short, local weekend trip planned next weekend so will be able to take more photos of everything then =)
Top

Good stuff, I think overall your list is absolutely fine, the weekend trip will highlight any big problems. But don't forget (as I did) that you can actually buy stuff en route - if you find after a week that you desperately need clothes pegs, then you can easily buy some in a supermarket. That would be my approach with pretty much anything that you're unsure about taking.

But anyway, the worst that can happen is that you'll be carrying a couple of kg too much kit, it only makes a difference on the uphills

I'd probably leave the bottle of wine out though, especially as it's Echo Falls

Ahah yeah I'm stopping with a friend 10 days in in Hamburg too and she'll be about to move out so I'm sure any little things like clothes pegs I could nab from her and if I find there's stuff in there I really don't need I can post it home or ask if she can take it back for me. The only really big hilly area will be going through Switzerland and that's 2/3rds of the way through so I'm sure by then I'll have refined the list a bit and cut out some unnecessary weight! I'm only taking the 2 panniers plus tent on the rack and small bar bag so I'm bound to ditch some bulky unnecessary stuff along the way too. As you say the worst that can happen is I have to buy something along the way or bin/post home a few bits!

As for the echo falls I was enjoying the fact you get get zinfandel at all in Amsterdam since France in general refuses to stock it. In my defence I'm just a student and echo falls is generally all my budget can stretch too. Trust me when I say it's better than the stuff you get for £2.50 in tesco and is tons better than drinking supermarket brand vodka!! =P
Top

I like your list, especially the luxuries .I would probably not bother with the cargo net or the mallet, (could use a rock)
Do you have quick links in your chain? May be worth taking a spare as they are tiny, also a small adjustable spanner I find useful.
I might have to add Marmite to my list

I too would leave the mallet behind. I don't know what a peg puller is, I use another peg.
Chopping board and drainer? I use a plate. But I am not Egon Ronay when camping!
Looks like a lot of footwear.
Good knife will usually do what scissors will.
Fish slice ditto maybe.
Probably wouldn't take brake pads. Start with a good set and see. Would be obtainable.
Newspaper is very useful, though it can be acquired pretty much anywhere!
Top

Thanks for the tips!

The mallet was a spur of the moment buy as they were reduced to £1 but having done a practice camp as you guys said it's not all that necessary and I'll be on campsites most of the time so can always borrow one from someone else if I'm desperate!

The cargo net has to stay as it's what will be holding the tent onto the rear rack!

I have no idea what quick links are but I have this bike. Can't see that is says anywhere any details about the chain. Will try to remember to take a couple of pics in the morning to see!

Tyre levers are another one I already have in the kit, just forgot to put on the actual list!

My plate and bowl set are the orisako folding ones and I'm not confident that a sharp knife wouldn't make a hole in them or at least seriously reduce their useful lifespan if used to chop stuff! The chopping board is pretty small, one of the plastic ones you get in poundland that's been cut down even more and then had a bunch of little holes drilled in one corner so it can be put across the top of a pot to drain stuff. As I said before because I'm veggie and I plan to cook a lot of stuff from scratch it's something I expect to use a lot but I guess if I don't it's not like I paid a lot for it so can just bin it =)

The boots are crossed off (hence being greyed out) so just down to 3 pairs =) and seeing as 2 of those are basically a sole and a few straps I'm not sure I could get it down much more or if it would make any difference!

Thanks for the suggestions!! =)
Top