Recent announcements by CUK have prompted me to look hard and closer at how well CUK has performed as an organisation. The stats and evidence I discovered suggests a pitiful performance over the last 5-10 years with the organisation going backwards rather than forwards in terms o membership numbers. The data I used is below. The data shows,

1) Between 2011-2019 the market /demand for cycle club membership (such as CUK) grew by more than 9% year on year.
2) Over this same period membership of CUK fell by 0.8% year on year. In a growing marker CUK could not even stand still!
3) By comparison a key rival, British Cycling (which also leads and is involved in campaigns to encourage cycling), grew its membership by over 18% year on year.
4) Over the 5 years between 2014 and 2019 CUK has seen its market share fall from more than 40% to just around 30%.
5) Cycling activity has been increasing over the years. Activity as measured by govt stats has increased by on average 1-1.5% year on year for the last 7 years. In that same period CUK's membership has declined at an average 0.85% year on year

It is clear that with an average year on year growth of (minus) -0.8% in membership since 2011 CUK has at best stood still when all others have moved forward with significant growth and has lost and probably is continuing to loose market share.

This is overwhelming evidence that CUK has not been able to strategically manage the organisation to keep pace with the incredible growth in demand for membership or the increase in cycling activity in the last 5-10 years.

The management capability of any organisation (charity or commercial enterprise) which is unable to grow its membership/revenue at at least the same rate as the market has to be questioned.

The membership figures have been taken from official CUK reports and British Cycling public documents. Pedal cycle traffic and distance ridden each year are from government data. 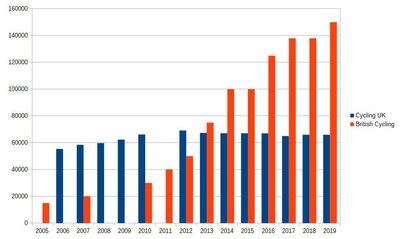 Where do the 'Membership Market ' figures come from?

I doubt the figures from CUK are very accurate, when I was local member group membership secretary, affiliated clubs and organisations counted as a member and there were weird things going on with household numbers.
Haven't CUK outsourced membership? If so maybe it is more accurate?

The biggest issue is simply the flat lining of CUK membership - that's just plain extraordinary if it's correct.
Top

It's pretty flat. CUK officers in another subforum were calling 70'000 members a new highest ever, then after it was pointed out CUK and CTC before it have been claiming that number for about 15 years, the total was revised to 73'000, which isn't totally flat but isn't a big increase over 15 years.
MJR, mostly pedalling 3-speed roadsters. KL+West Norfolk BUG incl social easy rides http://www.klwnbug.co.uk
All the above is CC-By-SA and no other implied copyright license to Cycle magazine.
Top

It's pretty flat. CUK officers in another subforum were calling 70'000 members a new highest ever, then after it was pointed out CUK and CTC before it have been claiming that number for about 15 years, the total was revised to 73'000, which isn't totally flat but isn't a big increase over 15 years.

LIES, DAMNED LIES, AND STATISTICS. This seems to be the CUK's core philosophy for all things concerning its PR related to membership .

The figure of 73,000 is a misrepresentation of membership.

The additional 3,000 are the 3,000 people who have taken up CUKs offer of a FREE service for 3 months. As such these people still have to be converted in to members. No commercial organisation would consider it acceptable to count prospective customers as customers (and hence a source of revenue). To do so is would be to mis-inform and deceive its shareholders and expose the company to claims of accounting irregularity

Nicola Marshall says "we think 70,000 would still be our highest number of members"

So 70,000 seems to the the best guess that CUK can provide about its membership (and a source of one of its revenue stream) - it really should have a better understanding about the numbers, after all it is taking in each individual membership payment.