by Vorpal
When someone calls another person a cheat and tells them that they may not participate in a sport because of their gender, I can completely understand how they feel hated. I would.

Vorpal wrote:When someone calls another person a cheat and tells them that they may not participate in a sport because of their gender, I can completely understand how they feel hated. I would.

Surely disappointed, upset, confused ..... but hated ..... i do wonder if many people understand what hatred actually is .... or is the culture of the Victim so entrenched these days that there are no greys .. just love - hate and no middle ground ..... and at no time has anyone been forbidden or told they may not participate in any sport because of their gender ..... name them please ..." forbidden from participation in a sport " who are they.

I appreciate that we all have varying views on this subject and for most the term 'free speech'' is used. However this is a publicly accessible forum and as such it is open t everyone , be it supporters or those against transgender people and their rights etc.

All our comments as such may be subject to public scrutiny and checks by not only the forum admins but also by the authourities and although some may disagree with ''big brother'' policing the internet it is a fact of life nowadays.

So please take time to reflect on the contents of posts as you may be subject to investigation which may then result in a hate crime being recorded. Please read on further as you will you will note from below - A hate crime incident does not have to be directed against a specific individual etc. So ''general comments''. or ''I just wanted to point out'' can be construed as hate crime.

The lovely er, 'lady', who won the cycling championship turns out to be rather hateful.

'She' is currently celebrating that a feminist is dying of late-stage brain cancer. 'She' is happy about this fact because it's not the done thing, apparently, to disagree that big hefty blokes can become women.

Incidentally, I wonder if it would be a hate crime to spot the odd-woman-out in this photo:

by thelawnet
Said woman died of brain cancer yesterday, aged 36, so McKinnon decided to post a cartoon of someone 'dancing on a grave'.

This was not the best timing for Strava, which had for some reason decided to post a fawning video profile of McKinnon a couple of days before.

Strava said 'she faces harassment just for pinning on a number.'

which is quite the take, really, for someone celebrating people dying of brain cancer.

Quite a lot of people are not impressed with Strava; how many of them are paying customers is not clear.

The World champion cycling cheat returns to destroy all the progress that Womens Cycling has fought for .. again.
https://www.cyclingweekly.com/news/raci ... tle-440713 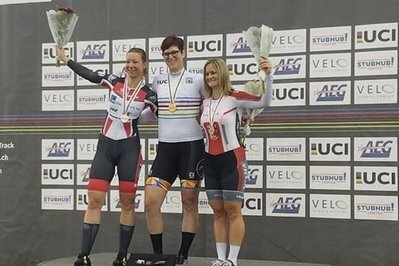 Guess which is the man entering ladies races in order to cheat his way to the rostrum ...... McKinnon.
( Yes .. he has a penis. )

by thelawnet
I think that is an old photo.

Latest effort is this: 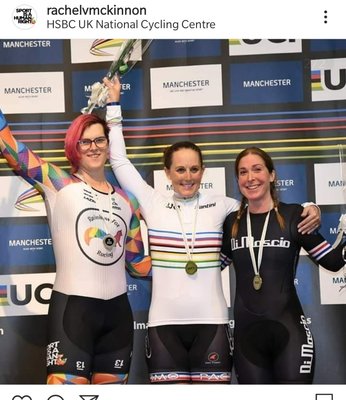 I'm not sure if there is anyone at the BBC who knows anything about cycling, but this is ridiculous

McKinnon's time would have seen him eliminated in the qualifying round for the last two Olympics, so it's not so much 'ruling out', as 'never had a chance, despite being a cheat'.

The problem very specifically with 'Masters 35-39', is that at 35-39 you can still compete as 'elite', assuming that you want to compete at all.

So it's effectively a Category 2 race to start with.

There are faster times belonging to 35-39 year old women but because they haven't been achieved in 'Masters' racing, they aren't counted. Which seems silly to me.

All his crowing about a 'world record' in an amateur race in a category that's not really what it appears, is terribly narcissistic. He'd just as well turn up for an under 11's cycle race.

by landsurfer
For the second year in a row the Women's Masters World Track Champion is a man.

My heart goes out to those Women that have trained and dedicated themselves to sport just to have a man turn up and steal the podium from them.

Why are we letting this happen ?

landsurfer wrote:
Guess which is the man entering ladies races in order to cheat his way to the rostrum ...... McKinnon.
( Yes .. he has a penis. )

Does she? how do you know? i understand some genetic women have something extra in their knickers, does that make them male?

i have no strong opinion on the issue but clearly you do. If an athlete meets the UCI criteria to compete thats good enough for me - a trans athlete will have to jump through a lot of hoops to do that, to assert that anyone would embark on a gender change just to win a couple of gongs is at the very least naive, but could also be interpreted as a gender crime And yes i do know more than one trans cyclist.

by landsurfer
My wife and I supported our son through his 3 years living as Kate.
A former National Pole Vault champion.
He stopped competing before his transition and is still recovering from the effects of the prescribed medication he was given.
He no longer competes at any level preferring to be an official for Athletic events.
Both he and his husband Zac find the cheating of McKinnon and his like wrong ... More than wrong ...
But as Gay men they're frightened to cross the path of the Trans activists ...
How have we let a tiny % of the population rule us ... Cowardice ..just cowardice ...
.....
We are regular participants and supporters of events, social and sporting, within the LGBTQ community in Sheffield and Nottingham ..
The fear of Trans activists ... who do not seem to represent the greater number of Trans people, stifles any discussion..positive or negitive ...

McKinnon has a penis .. He is not shy about telling anyone who will listen about it .. That's his point .. Even though he has a penis you have to pretend he is female ... The fight for Universal Suffrage for Women can not be allowed to die on this false alter ..

by alexnharvey
I think that McKinnon is not so interested in winning cycling races for its own sake. The interest appears to be in using it as a platform for their strand of female exclusionary radical trans activism, which they are also making an academic career out of, and achieving a degree of fame and media attention in the process.

by Tangled Metal
Still, one good thing about him/her. She's pi$$ing off a few reactionary types. Whether or not I agree with her competing as she does at least she's doing one good thing there.

Carry on complaining. She appears to meet all requirements placed on her to be allowed to compete as a woman. As long as that's the case she's got the right to compete. Plus she's still got to train and put in more effort into her sport than people here are probably doing. It's not like she cuts off her member, takes hormones / suppressants, calls herself a woman and suddenly becomes so much better than the women she competes with.

alexnharvey wrote:I think that McKinnon is not so interested in winning cycling races for its own sake. The interest appears to be in using it as a platform for their strand of female exclusionary radical trans activism, which they are also making an academic career out of, and achieving a degree of fame and media attention in the process.

Extreme transgender support involving the exclusion of the female sex ... at a guess .... feel free to put me right alex.

Worth checking out the split at the charity Stonewall, their decision that being gay or lesbian makes you automatically trans-phobic and their instance that being a lesbian has to lead to a transition has caused the charity to split ... their founder Simon Fanshawe leading the breakaway group.

by alexnharvey
Yes, I was essentially playing on the term used by McKinnon and others in their denunciation of women who object to this strand of transgender activism as TERFs, trans-exclusionary radical feminists and therefore transphobes. It is the attempts to silence and exclude feminists who question the impact of this transgender activism from any debate that I object to most strongly. Men who identify as men are also denounced by the FERTAs in the same way as transphobes when they enter the debate. Those denounced as TERFs include female athletes who complain (e.g, Sharon Davies, Kelly Holmes, MArtina Navratilova) as well as feminist activists and academics who question this position.

It would be more accurate to say I object to McKinnon's strand of transgender activism on the grounds that when there is a conflict between the two they would prioritise the rights of people born as male who identify as women (BMIW) over the rights of people born female who identify as women (BFIW). For the most part I think we should attempt to take them as equal rights but there are some occasions, sporting competitions for example, where attempts to treat them as equal lead to significant disadvantage to the BFIWs.

The scientific and sporting evidence on the unfairness of having someone born-male and who completed puberty as a male competing against people born-female are well covered elsewhere. I believe it is that in most sports people born XX are at a disadvantage to most people born with a Y Chromosome (XY, XXY, etc) who have had the effects of testosterone through puberty.

I do not have a neat means of providing people born-male-identifies-woman with fair access to competitive sports whilst also providing fair access for BFIWs. That is sad and difficult. Competing in an open class would be one possibility which does not require anyone to misidentify themselves to compete. We could have a men's class, a woman's class and an XX class and then women can choose whether they want to compete against people who share their biology or their gender.

I do not think McKinnon is a cheat. I think she is an activist who has found an ingenious way of promoting her activism through sport and the media coverage of this issue. I think she that in the process she is quite happy to ride with knobbly tyres over the rights of BFIWs. What sort of feminist does that?
All times are UTC+01:00
Page 8 of 11
Powered by phpBB® Forum Software © phpBB Limited
https://www.phpbb.com/