Discussion of the re-branding of CTC as Cycling UK.
Post Reply
169 posts

If the CTC were to change, how long would it be before someone labelled it "The Notional Cycling Charity"?

If the CTC were to change, how long would it be before someone labelled it "The Notional Cycling Charity"?

Since the CTC has been pushing the strapline "the national cycling charity" for some time now, I'll suggest that "The National Cycling Charity" would be a good name; at least, it would save money. (I don't want to appear to be obsessed with grammar: it's no more than habit that has me using the upper case for proper nouns.)

I'm not sure they could "get away" with calling themselves just "THE National Cycling Charity" - other national cycling (& related) charities, such as Sustrans (there's also Cycle Nation but they seem to be simply a not-for-profit business rather than a charity), would be likely to object.

Back to Plan A then (And we'll bide our time till some wag refers to the Notional Cycling Association.)

It may just be me but National Cycling Association sounds fairly formal and traditional. It isn't a million miles away from the old National Cyclists' Union. I'd rather it stayed as the CTC but, if that is considered too old fuddy duddyish, is NCA any more likely to draw the next generation away from British Cycling? I'm surprised their consultants haven't followed recent fashion and suggested a single-word name ("WHEELS - the national cycling charity"

). At least it would be a bold new direction. Changing to the NCA would just be a pointless sidestep.

I say this as a lover of archaic organisation names. I had to join this one after seeing this sign: 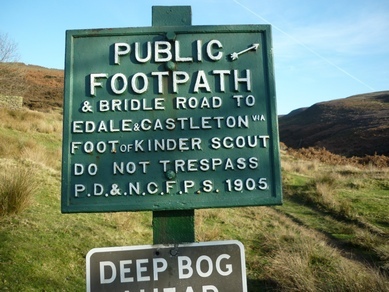 That would be The Peak District and Northern Counties Footpaths Preservation Society - or "P. D. &. N. C. F. P. S." as everybody in a pre-internet age was seemingly expected to understand

The Royal National Lifeboat Institution backs it both ways with the initials RNLI and the single word Lifeboats.

I thought of Cycling as a single-word name in the same vein. Unfortunately, Cycling is associated with "The Comic," even though that's currently Cycling Weekly (and no quips from the back of the bunch about cycling weakly, thank you very much.)
Top

The consultants came up with four suggestions, at least that's what the October 2013 National Council Meeting Minutes say:

14 Brand Refresh
Gordon confirmed Forsters have now moved to the creative stage of the project and have come up with 4 ideas – one fun, one heritage and two inclusive. These will be shown to three focus groups based in Bristol, Birmingham and Norwich and the feed-back results will be reported at the ‘Awayday’ in order that Council can make its decision. Staff have been shown the ideas and but are not included in a focus group as they are not potential members. Peter Hayman confirmed the Council working group’s satisfaction with progress to date. Barry Flood confirmed the Operation Committee will have to consider the costs of this re-branding.

Presumably guided by those focus groups Council decided to register "National Cycling Association" as a trading name, although it seems that their consultants registered it four days before the decision was made

I don't know what the other names under consideration might have been, perhaps "Notional Cycling Charity" was the fun option

.
There'll be tarmac over, the white cliffs of Dover ...
Top

Thanks for that. It's becoming clear why some recent posters who are presumably in-the-know have revealed that the CTC is hard up. Focus groups...away days....

On this thread or another, somebody (Fausto Copy? and sorry if I've got that wrong) mentioned that the CTC was getting like a political party. That's becoming clearer too.
Top

I would have thought that the brave new organisation would have had to change the name since becoming a charity.
After all it is such bad from to have the word club in the organisation name. People might confuse this and think that it has members not donors.
Using the word charity in the name is so lower class and might attract the wrong sort of people wishing to give their money away.

I these busy modern times people do not have time to look on their smart phones to find out what on organisation actually does, apart from employing professional charity workers (with the charity worker degree).
Thus the name must reflect this and consultants be employed then working parties formed after that committees (all having nice away days on expenses), then a decision can be made about the new name.
This would then be launched at a lavish lunch or even better evening do (best hotels on expenses).

The final choice of name does not really matter and does not have to reflect the supposed aims of the charity. The main objective will have been achieved employing more charity workers to sort it out and having a jolly good time on expenses.

The above is an opinion based on my personal thoughts and feelings as to the way I feel modern charities are run. This is not based on any fact and does not purport to have done so.
Keith Edwards
I do not care about spelling and grammar
Top

RickH wrote:I'm not sure they could "get away" with calling themselves just "THE National Cycling Charity" - other national cycling (& related) charities, such as Sustrans (there's also Cycle Nation but they seem to be simply a not-for-profit business rather than a charity), would be likely to object.

Some larger Cycle Nation groups are charities (including London and I think possibly Cambridge) but the national association's corporation isn't and I doubt it ever will be, because the increased regulation and limits on campaigning activity seems to outweigh the financial benefits. I think CN might be concerned about NaCA as a confusing name, but probably not about National Cycling Charity.

Despite the CN-CTC memorandum of understanding, I don't think CN members have heard anything either, except for one line at the recent conference that the CTC name will change.
MJR, mostly pedalling 3-speed roadsters. KL+West Norfolk BUG incl social easy rides http://www.klwnbug.co.uk
All the above is CC-By-SA and no other implied copyright license to Cycle magazine.
Top

I've never been touring in my life and am a relatively recent "returner" to cycling. I'm a leisure cyclist and my understanding of touring cycling (rightly or wrongly) is something that takes longer than one day, so I don't mind if the CTC doesn't concentrate on touring and I don't particularly mind if CTC is a charity or not. Maybe I should, but not having experienced its previous incarnation I don't know what I'm missing. What I am looking for is a "Pottering Cyclists Social and Advice Group" and if CTC fits that bill for me then I'll renew my membership when its due. I've become less interested in the magazine, but more involved with my Sunday rides, ie my local CTC group activities. Maybe I would get the same from being a British Cycling member however, to put it bluntly, my local BC-affiliated cycling group frightens me with their club gear and advertised riding speeds, plus my reluctance to join any club that wants to interview me first. Chain-gangs? Not at my age, thanks - and I'm still a few years away from the free bus-pass. This forum is giving me all the information I need at the moment so if I can get access to this for free then as far as I can tell the only advantages for being a CTC member are the insurance benefits and the social weekend rides. Is that worth 80p per week? At the moment it is. I see from the BC website that I can become a member for the equivalent of only 55p per week if I pay by direct debit and that looks like it could be better value for money.

That said, I don't think any change of branding is required to make CTC more attractive to prospective new members, or disgruntled existing members, as much as more imaginative marketing. There should be absolutely no reason why a Cycling Tourists Club can't appeal to millions of new leisure cyclists if they can be persuaded to accept the concept that touring includes heading out for an hour's ride in a circle round the local roads, maybe with a stop at a cafe or pub half way round. I do think that most casual cyclists (for want of a better adjective) would rather join something called a club than they would something called a charity. I strongly believe that what inexperienced cyclists need more than anything else is encouragement and help, be that technical advice or motivation to ride their bikes outside their comfort zone (eg further that they otherwise would on their own).

None of this is news as all I seem to be doing it underlining what has already been written on this thread and others. Chris Juden spoke most eloquently for me with his post of 19th Nov; and given that CTC is already at focus-group stage then our input is no more than token. Surely the entire membership should be the focus group rather than random selected people based in Bristol, Birmingham and Norwich?

As far as me remaining a member of CTC: its not so much the branding that matters to me as much as the service it provides and if CTC believes that the former is more important than the latter then I can only conclude that I'm not part of their target market.
Top

This is well written. Thanks. Maybe we should start a group called "you wait for me at the top of the hill."
Top

Hello,
I was in a bike shop (!) last week in Dorset (where I live) and was chatting (like one does) about bikes!
The conversation was 'enjoyed' by the shop owner (decent size shop) and myself plus two other 'Cyclists'. At some point I mentioned CTC. Not one person including shop owner had any idea what CTC was!
I am of the view that although I am a long standing (25 years approx) that CTC is a non relevant organization that has no or very limited power in the World we all live in. The Membership in my opinion these days is purely a voluntary gesture.
Regards,
John
https://www.flickr.com/photos/186990228@N05/albums
Top

"except for one line at the recent conference that the CTC name will change."

Yes I think this is where the confirmation of rebranding originally came from. According to our MG Chairwoman who attended this conference, this was announced by our new CEO in London recently. I stated "Rumour has it" PH because I still haven't seen anything official in writing, but the source is one hundred percent genuine and apparently the way he spoke of it suggested it could be policy. Apparently the wobbly wheel logo is to be replaced by an updated version of the "winged wheel" which may appease traditionalists. If you want further clues, the club is offering 15% discount on cycle clothing with the club name on it.
Top
Post Reply
169 posts