Of Cysts and Hysterectomies.

Of Cysts and Hysterectomies.

Not sure if this is the best place or the women's section but information might be of importance to the menfolk who may see the signs in their other halves (or other family members).

Without being too graphic to embarrass male sensibilities, I had 2 failed attempts at a smear test over Xmas / New Year due the relevant part having been pushed into an odd angle.
Simultaneously I was feeling bloating .. but who doesn't get some bloating over Xmas due to some over indulgence. It did however continue into the New Year by which time was waiting for Dr's referral.
Around the same time also started getting some period type cramps toward the end of a cycle ride, some altered pressure on bladder and some backache with no discernible cause (usually get some after gardening or when I have lifting bikes in and out of the van), but then I have had a lifetime of nursing/midwifery shifts which can contribute.
Most worrying I realised I could feel a lump in the lower abdomen.

While waiting for GP appt I had a hotline to a consultant I have worked with for 25 years and she arranged a scan, this led to some blood tests and a CT scan, with the result I have a large cyst of unknown composition that hasn't encroached on other organs... or lymph nodes.

Full on hysterectomy is scheduled for 12th March (had already become reconciled to this outcome early on in Jan and the subsequent disruption to my cycling ambitions of 30mp day). It could be done on 1st if another case gets cancelled.

Can't say it has been the cheeriest start to the year but have been trying to keep positive that it has been caught quickly, and planning my recovery / return to fitness. It didn't help when we had the news of local weather girl Dianne Oxberry's demise.... it hit me hard on the day of the announcement but to find it was due to ovarian cancer was a double whammy. Fortunately I do have friends and work colleagues who have had similar diagnosis and excellent outcomes.

Worryingly is the way the symptoms can so easily be missed or passed off as 'time' of life etc., so not trying to make the post just about me.. but about how important it is to be aware and if worried about anything it should be checked out.
I stand and rejoice everytime I see a woman ride by on a wheel the picture of free, untrammeled womanhood. HG Wells
Top

Good luck with this.
Top

All the best with this eileithyia. Mrs. Spinners (a non-cyclist) had the full-on hysterectomy a few years ago (after a very rough time) and has recovered ever so well so I'm confident you'll come through this OK.

eileithyia.
I feel for you as my wife was diagnosed with an ovarian cyst in September and has had a really bad time. On 23rd of October they removed a tumour the size of a melon from her ovaries. Because of the spread of cancer she also had a full hysterectomy plus removing her appendix and part of the intestine. Scaring in the intestine has resulted in twice being readmitted to hospital and a close call with death. She has also undergone four cycles of chemotherapy with two more to go before the results can be assessed. Our hope is that she gets the all clear but signs are that this is unlikely.

Knowing what she has been through I sincerely hope you have a much better outcome and my thoughts will be you. Best wishes for a good recovery and keep us all posted as to your progress.
There is your way. There is my way. But there is no "the way".
Top

Awful news. Like you, I have several friends who have come through similar and are back on their bikes.
Top

Best wishes to eileithyia for the operation and speedy recovery, and to your wife Bikepacker.
Top

People half-way around the world are sending you best wishes and thinking positive thoughts. (Well, a least this person is.)
Top

Ouch bikepacker, sorry to hear this about your wife and why life has been so worrying over past couple of months and why I have worried that I may have missed some of the symptoms... that does not imply that the same happened with your wife. Best wishes to you and your wife.
For a friend of mine the only time she realised something was wrong was when she got sudden onset of pain... not allowed to go home from her nightshift without a review in the gynae clinic and she was operated on 8 days later.... she is also still here several years on to tell the tale.. thankfully.
I stand and rejoice everytime I see a woman ride by on a wheel the picture of free, untrammeled womanhood. HG Wells
Top

Best wishes to yourself, and bikepacker and his wife - thinking of you all.
Top 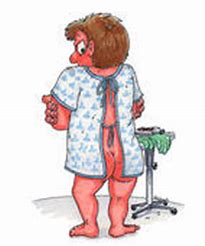 Hoping the next rear-end view is when you are out in front of the bunch!
Get WellSoon!.jpg (7.95 KiB) Viewed 645 times

All the best. These things to sent to try us. I hope and trust it will all work out well.

My Missus has been under the knife recently. And I mention it because it is a lesson in being aware of your own body. That is what has made her own story probably one with a happy ending. She has breast cancer. Alarming, but it has been removed with minimal fuss and so far tests indicate it was confined and with radiotherapy she very much has the odds in her favour. Better than 90%. And apart from feeling sore she doesn't feel ill. Enjoying the time off work, in fact.

But here is the important lesson. Her tumour did not show up on mammograms. Even after the hospital staff knew where the tumour was and had done a biopsy, they could not see it on a mammogram. It took MRI to see it. So the message to the women here is prod around and report anything new to your GP.

Well said pwa, as you say so important to understand and know your own body, best wishes to Mrs. PWA.
I stand and rejoice everytime I see a woman ride by on a wheel the picture of free, untrammeled womanhood. HG Wells
Top

Return to “Health and fitness”