New Rockhopper Sport is awesome, but I've noticed that the front derailleur cage is very close to the rear tyre. On the inner chainring there's only about 2-3mm clearance. Is this a problem? If so, how do I correct it? I can't adjust the low limit any, otherwise I'll get chain rub.

Rear tyre is the standard Fast Track 29x2.0 that came with the bike.

Pic doesn't really show but it's hard to get the camera in. 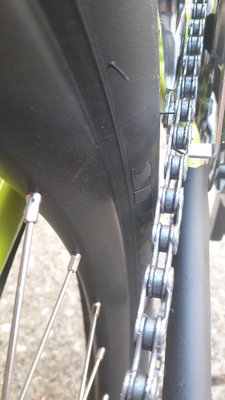 You could check the chain line at the chainset. As it's a new bike the spec should be on the Shimano (if they made it) website.
Top

How much gap on the other side? i.e is the wheel in straight?
Top

Just had a look, everything seems fine as far as I can tell. Plus the rear brake isn't fouling. 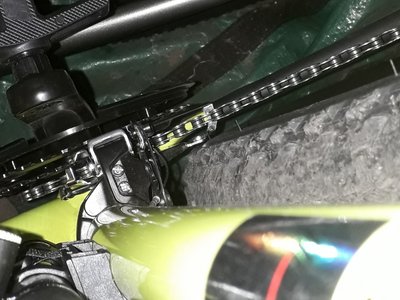 (Ignore the space around the chain - it's on the 4th or 5th gear at the back).

@NetworkMan can you elaborate (in idiot terms)? This stuff is new to me.
Top

Sorry about that. It's a way of specifying how far the chainrings are away from the frame. For example on my road triple the middle ring of the 3 is 45 mm away from the centre line of the bike. If you have a triple you measure from the middle ring horizontally to the centerline on the downtube. On your mountain bike it will be more. We need the chainset model to look up what it should be. If it's a double chainset you measure from midway between the chainrings.

This is a long shot but it's just possible something has been assembled wrongly and if the chain line were too far in (too little) it might cause your trouble.
It's also possible that if you take it back to the shop they'll say they are all like that sir and they may well be right!

Did you check that the gap between the side of the rear tyre and the chainstay was the same on left and right. It wasn't quite clear to me if that was the case.
Top

Assuming the wheel is built straight and is central then it could be that any spacers between chain set and frame are on the wrong side moving the chain set over a bit.
Or it could be design.
Can you have a look at another one ?
Top

Just had a look in daylight.

The wheel is aligned straight, central in the frame and running straight.

I thought "sod it" and adjusted the lower limit so the derailleur cage was about 4-5mm from the tyre, which looked a bit more acceptable, but then it wouldn't gear down to the lower chainring.

I don't see any spacers on either side of the crankset. Should there be some? Would I be able to see them easily without removing the chainrings?

Had a look on google/youtube to see if other Rockhopper Sports are the same, but nothing conclusive, and nobody's mentioned it so either they don't have this issue, or it's not an issue at all. Which doesn't help.

I've emailed the shop with some pics and waiting for their reply - can't really just pop in as it's over an hour away.

Just found this video - no idea what he's saying but the cage seems quite close here, too. Though, certainly not as close as it is on mine.
https://youtu.be/uzzNFrmSqXY?t=71

The one on the women's bike (about half way through the video), does look very close though the angle doesn't make it that easy to see.
https://youtu.be/uzzNFrmSqXY?t=225
Top

Darkman wrote:I don't see any spacers on either side of the crankset. Should there be some?

According to Specialized's website your bike has a square taper bottom bracket unit and an unbranded chainset, and that type of bottom bracket normally would not have spacers. Square taper BBs are available in various axle widths, e.g. from 110mm or less up to 127mm. It's possible that the BB fitted to your bike might be a narrower width than is ideal, and you could replace it with a wider BB which would increase the distance between the tyre and front derailleur. However, that might also affect the performance of the front and rear derailleurs, depending upon the resulting change in chainline.

So it's worth checking what your current chainline is, as NetworkMan suggests. It's likely that your chainline is 50mm, since that is the standard Shimano MTB triple chainline, and your unbranded chainset is likely to be based on the Shimano pattern and standards. Sheldon Brown explains more about chainline and how to measure it.

It's possible that Specialized may have simply specified a tyre that is just a fraction too wide for the chainline of that particular chainset and bottom bracket width. Tyres can stretch a bit after a while and will also be wider if fitted to a rim with a wider internal width between the sides of the rim, so sometimes the only way to tell if there will be sufficient clearance is to build a bike with exactly those components, as opposed to assuming it will all be OK based on the nominal specifications of all the components on the frame as designed using CAD.
Top

Darkman wrote:....I thought "sod it" and adjusted the lower limit so the derailleur cage was about 4-5mm from the tyre, which looked a bit more acceptable, but then it wouldn't gear down to the lower chainring.

Just checked the chainline as suggested and it's exactly 50mm. So I guess no problem there.

I did turn the lower limit back 1/4 turn at a time until it dropped to the lower chainring, and it was more or less back where it started.

Starting to think this is just how it's meant to be and I'm fretting over nothing.
Top
Post Reply
10 posts • Page 1 of 1