For discussions about bikes and equipment.
Post Reply
32 posts

re Edelux I vs Edelux II; graphs like this one suggest a small but worthwhile increase in brightness. 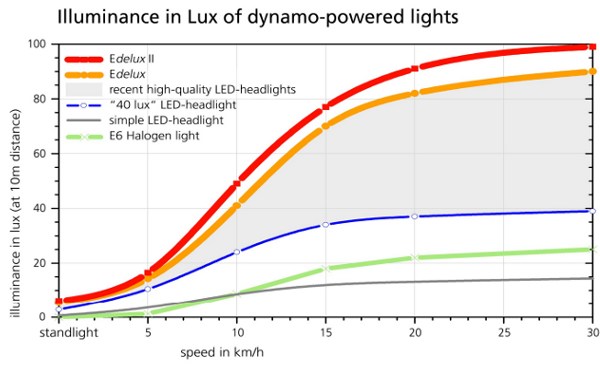 However the beam patterns tell a slightly different story; 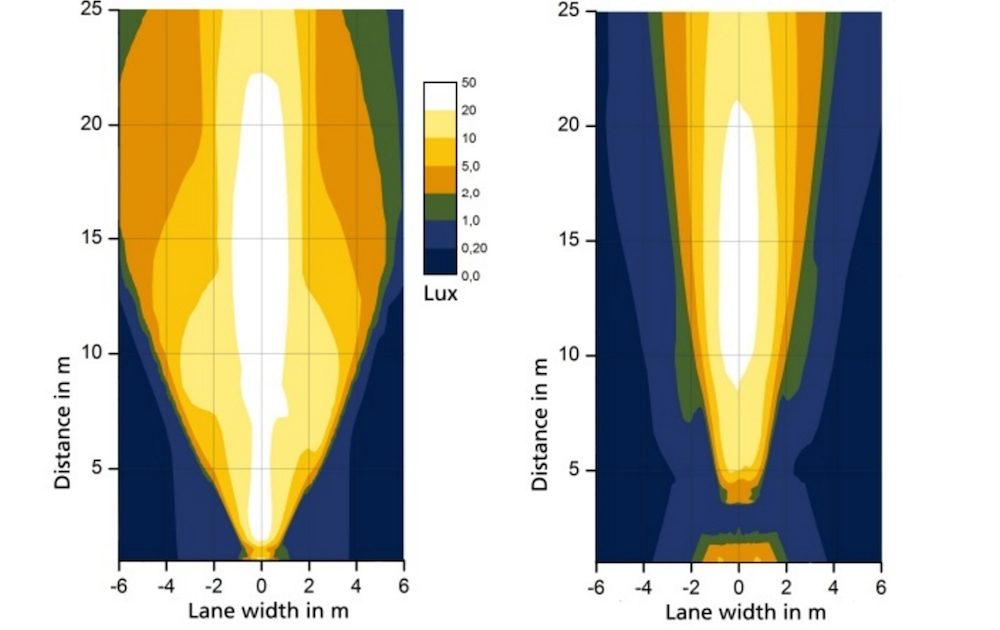 the areas of the beam above any given brightness threshold appear to be about twice the size which requires about twice as much light. I suspect this is more than can be accounted for by improvements in LED efficiency alone, and that the Edleux II may present a more reactive load to the hub generator. In other words both power used and drag may be considerably increased over Edelux I.

Anyone seen any data for Edelux II (or Cyo premium which is meant to be similar) drag vs power output into the real load?

I found this illustration of how power output of DH-3N30 varies with load characteristic; 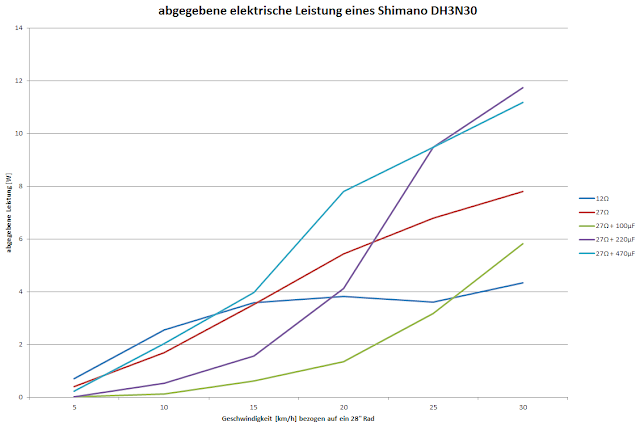 The labels are not super clear but the horizontal axis is speed in kmh and the vertical is power output into a load resistor, with a series capacitor in some cases. Drag is not measured. The series capacitor trick is used to boost power output in the 'forumslader' charging circuit, but being a reactive circuit it reacts slightly differently depending on the hub generator used to drive it (as per the OP in this thread).

I have little doubt that increases in power output are usually accompanied by a drop in efficiency in most cases. So, can you have your cake and eat it? By which I mean can you choose to have high efficiency and/or high output?

An obvious way of doing this is to carry two lamps; one with a low output (and high generation efficiency because of the way the load matches the generator) and a second lamp (eg an IQ-X) which causes more drag but also makes a lot more light. It would then simply be a matter of switching between them as desired. For example on a descent or with a tailwind, having brighter lights is a good trade for more drag; higher speeds means it is useful to be able to see further. A slightly less obvious (but potentially equally effective) method might be to have a lamp which constitutes a non-reactive load most of the time (so will draw ~3W, reasonably efficiently) but is capable of utilising more power should it become available. It might then be a question of having a mode switch which simply switches in a series capacitor as required.

Brucey wrote:... some folk may remember me muttering about how efficiency tests on hub dynamos have typically been carried out using a purely resistive load ... 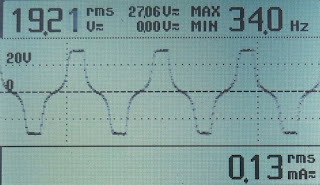 Surely any led lamp for a hub dynamo is going to need a smoothing capacitor to reduce flickering ?

SA_SA_SA wrote:Surely any led lamp for a hub dynamo is going to need a smoothing capacitor to reduce flickering ?

Has any one drawn out the circuitry in their Cyo etc
Upmarket lamps.

LEDs really need driver circuits as they are current- not voltage-driven. So it's rather more complicated than just a capacitor for any decent setup.
Top

i just assumed people interested in this thread would know that a simple 1w led lamp like my old basta pilot contains a rectifier, current limiting resistor, said led, and caps( although only supercaps ) and zeners for voltage regulation. But I wonder what the exact circuitry in fancier lamps is...
------------You may not use this post in Cycle or other magazine ------

Fancier lamps seem to use a PWM drive after a rectification stage. As a standlight function is also desirable, there will doubtless be some fat capacitor there too. I suspect the PWM is used simply as it's off the shelf for LED drivers in other applications
Top

From the available data, it seems pretty clear that capacitance in series with the load (before the rectification stage) is something which can be used to increase the power drawn from the generator, perhaps at the cost of overall efficiency.

Presumably capacitance after the rectification stage is going to have a somewhat different effect.

I wonder if there is scope for better matching the load to the generator, or at least being able to predict (eg on the basis of simple measurements on a given generator) when a particular lamp/load risks being inefficient?

One of my chums (who is far better versed in these things than I am) suggested (much as Conrad has I think) that the peak current drawn in some pairings may be so high that the pole pieces saturate and that this results in greater losses when certain loads are driven. If this is happening, is there a 'sticking plaster' solution that is worth having, I wonder?

I keep returning to this particular figure

Is there something simple you can do such that (with any given generator/load) you choose between high light output + high drag (vs lower output + lower drag), and switch between these modes according to need?

If I understand correctly, what you are getting at Brucey is whether high output (with a disproportionate loss of efficiency) can be switched out.

I tihnk we are at a point of a rethink in dyno systems, as up to now light output has been relatively weak and so 'the more the better' has been the rule. Certainly that was the case with incandescent lamps. Now we are in a world of both very efficient LEDs, combined with very complicated load behaviour.

Probably an efficient (but lower output) light could be achieved by using the PWM drives common in battery LED lamps: certainly I can see strobing artifacts when riding my MTB at night, I guess that the drive is around 300Hz, although I've never bother putting a scope to look at the signal. So a dyno driving a battery-type LED system with variable brightness looks worth investigating.
Top

Given thst emc rules required fancier design of mains switch mode psus, surely there should be a supply of tricks and their associated electronic engineers / knoeledge to limit inefficiencys due to high rectification peak current etc.. As in mains switch modes did the same thing of taking high peak currents, causing harmonics , bad power factor etc.

Would the stzvo requiring a lamp efficiency test against a real range of typical generators be the best form of encouragement?
------------You may not use this post in Cycle or other magazine ------

hamster wrote:If I understand correctly, what you are getting at Brucey is whether high output (with a disproportionate loss of efficiency) can be switched out.

exactly. And in a similar vein if a 'bad match' can be made better, after the fact?

FWIW if the choice is (say) between 2W output for 5W drag, 3W output for 7W drag, or 5W output for 14W drag, there is (for me) no 'one size fits all' solution, and being able to switch between modes would suit me very well. Pipedream or possible, I wonder...?

I think the German bicycle light regs do now allow a switchable high beam mode. There don't seem to be many dynamo lights with that feature at the moment, but I haven't done a proper search.
Top

Brucey wrote:... some of these tests are summarised here...

... but, frankly speaking, to which extent might be credible tests basically performed on a test jig in which hub dragging power is indirectly and exclusively calculated on electrical parameters based on a DC driving motor that, at least looking at the picture, appears to be four/five times the nominal power of the hub itself? 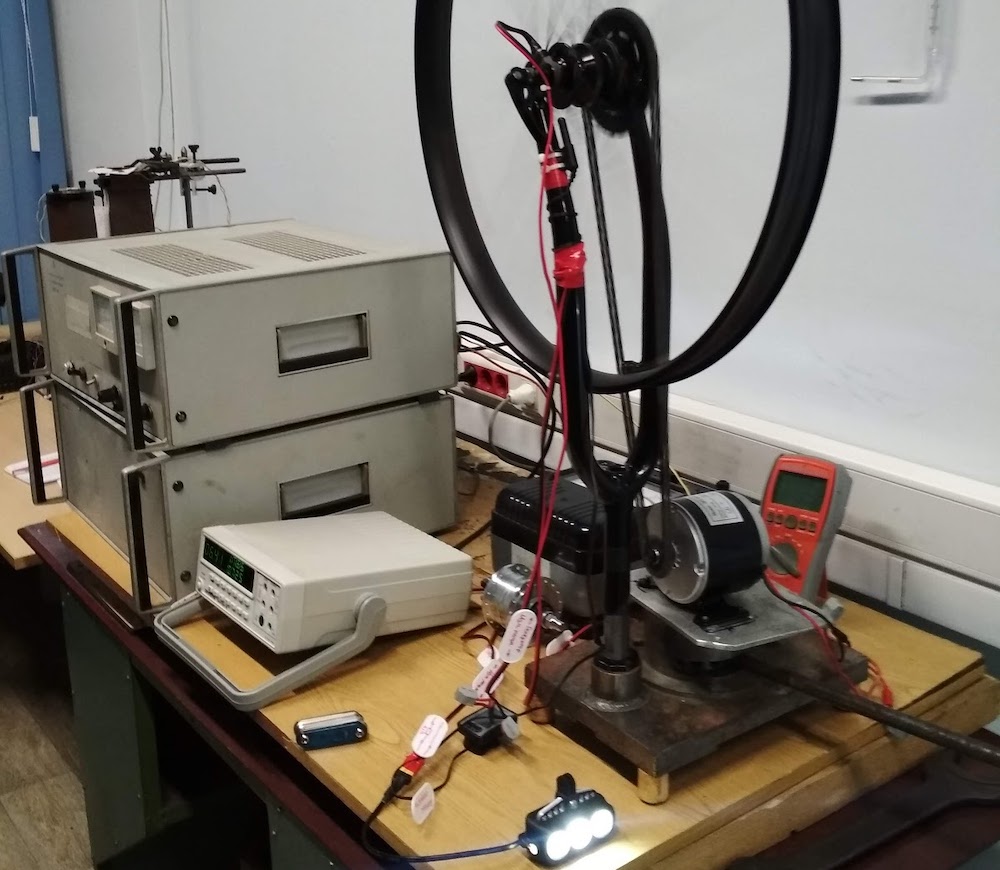 QUOTE, from the original above reported link.

The Skjegg test rig is essentially a fork and dynamo front wheel, which has been clamped onto a heavy steel plate. Replacing the disc rotor is a cog which connects via a chain to an electric motor mounted on the steel plate. The electric motor is then connected to a laboratory DC power source, where you can control the voltage, and therefore, wheel speed. Speed is monitored by a bike computer and the voltage is measured with a multimeter. Multiplying the readings of the devices, you can calculate the power that the engine needs to consume to spin the dynamo to the required speed. The power of headlights and USB chargers was measured to an accuracy of 0.1 W and the speed to an accuracy of 0.1KPH.
The hub drag is measured indirectly at the electric motor, rather than at the dynamo hub. To determine the dynamo hub drag, Skjegg had to first find all of the drag losses in his test rig. He used a standard bike hub to determine a baseline system drag which could then be subtracted from the drag results of the dynamo hubs (at varying speeds, with different lights and chargers connected). With the influence of slight variations in chain tension between hub tests, the drag has been measured to an accuracy of 1-watt.

the test rig is claimed to be accurate within ~1W and the effects we are discussing are mostly far greater than that. So I don't see that the test rig undermines the results per se, even if it might make a small difference here and there. For example if you had asked me beforehand if it was even possible for a nominally 3W hub generator to drag by about 25W (regardless of load) I would have said "no, don't be daft" and would of course have been quite wrong.

FWIW I have long wondered the best way of carrying out such measurements, and amongst other things I have discussed this with one of my chums. He is first class experimentalist (he does this sort of thing for a living) and he was quite firmly of the opinion that the power characteristics of the right motor (with check calibrations of course) would best lend themselves to this kind of work; in other words, given a free hand he'd have built something very similar.

So I might doubt the details of what has been done but the approach is one that is sound and shouldn't be a reason for casting doubt on the gist of the results.

FWIW when the first generation of LED lamps was introduced, there was plenty of data from the manufacturers showing how efficient the overall setup might be, using real lamps as loads. That there hasn't been similar data published (by the manufacturers) in relation to more recent lamp designs is almost certainly because it does not make entirely happy reading, drag/ efficiency-wise.

Brucey wrote:... the test rig is claimed to be accurate within ~1W ...

... well, where that "1W" is coming from is a bit of a mistery for me.
Furthermore, from the above rig picture what I can see is just a multimeter, alternatively swapped as Voltmeter and Ammeter!
Maybe behind there are also some kind of analogue meters but they don't seem to be connected.
And the DC motor is really so much stable to rely at the end on a small power difference between normal hub drag vs dynohub drag, in this second case with lights off and lights on?