I'll be adding more to this later, hopefully.

Some time back I had a chain jam at the front derailleur.
I rode home on the middle ring, and fiddled about a bit to make it work-ish but it wasn't right.
Mainly re-positioned it as it seemed to have been moved.

I then got the books out and started from scratch and managed to get it working on the stand.
However to do this I had to slacken off both limit screws about as far as they would go, which doesn't seem right.

At the moment it works fine for the first 20 miles or so, then gets grumpy about going down onto the bottom ring (but only some of the time).
I am avoiding changing down under load, but even with no load the chain just grinds against the cage and refuses to drop.
Changing up is fine.

I'm going to have another go at adjustment, but I am left with the feeling that I shouldn't have to back off the limit screws all the way just to make it work.
Didn't used to be like that.

Looking it up on the Spa website it is only £25 for a new one so I am contemplating getting a replacement as a cross check.
However it would be educational to know how to tell if it is bent (if this is possible easily).

Viewed from the side, its bent if the curve of the mech. cage doesn't follow the arc of the big ring....the tooth to mech. cage gap should be the same all the way along.....provided the big ring is the size the mech. was designed for.
Viewed from above, its bent or twisted round the seat tube if the big ring doesn't lie exactly in between the inner and outer mech. cage plates ....although the cage plates should be closer together at the front than the back.
Bike fitting D.I.Y. .....http://wheel-easy.org.uk/wp-content/uploads/bike-set-up-2017a.pdf
Tracks in the Dales etc...http://www.flickr.com/photos/52358536@N06/collections/
Top 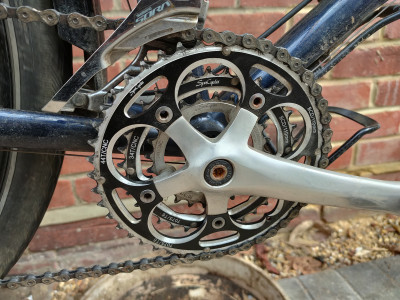 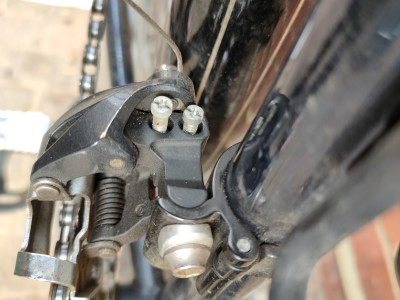 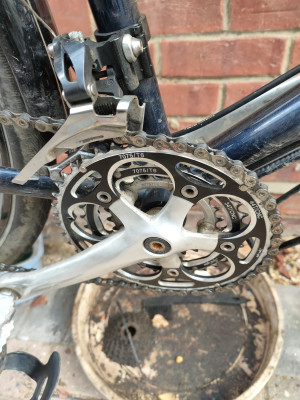 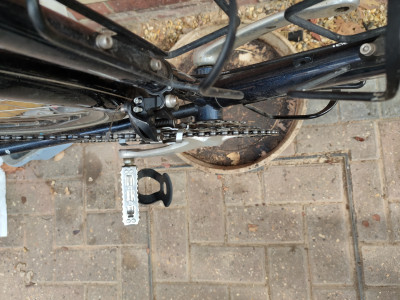 I am struggling a bit to get meaningful pictures.
Top

I have a slightly older r3503 and a Sora 50-39-30 chainset and looks like I'm running the derailleur a little lower relative to the largest ring. Generally I find as low as it can go without causing other problems provides the most optimal shifting.

Totally contrary to the instructions as well but I usually prefer to run my FDs on a slight angle with the rear of the cage further away from the bike. I find this allows me to ignore trim clicks entirely.
The contents of this post, unless otherwise stated, are opinions of the author and may actually be complete codswallop
Top

Nobody makes a touring groupset;.so you have drop bars, road bike STIs and a road front mech. designed for 50, 39, 30 chainrings (or thereabouts) running 44, 34 24 chainrings, or thereabouts. Its not ideal....even though you have the mech. right down on the chainstay, its too high above the 44 and 34 rings at the top, and too far away at the back. Even if you shorten the mech. cage to get it further down, the curvature is wrong.
Also you seem to have a mixture of different chainrings, I'm not sure thats a good idea.

(I'm also not sure about the shifting varying during a ride.....can it be that after you have been riding for a while, you forget to "nurse" the changes?
Bike fitting D.I.Y. .....http://wheel-easy.org.uk/wp-content/uploads/bike-set-up-2017a.pdf
Tracks in the Dales etc...http://www.flickr.com/photos/52358536@N06/collections/
Top

I just looked at your last picture close up, it looks like the outer cage may not parallel with the outer chainring, I see you say that you've moved it. It looks like it's kicking out at the back a bit relative to the chain wheel.
Nu-Fogey.
Top

531colin wrote: ↑20 Sep 2021, 7:06pm Nobody makes a touring groupset;.so you have drop bars, road bike STIs and a road front mech. designed for 50, 39, 30 chainrings (or thereabouts) running 44, 34 24 chainrings, or thereabouts. Its not ideal....even though you have the mech. right down on the chainstay, its too high above the 44 and 34 rings at the top, and too far away at the back. Even if you shorten the mech. cage to get it further down, the curvature is wrong.
Also you seem to have a mixture of different chainrings, I'm not sure thats a good idea.

(I'm also not sure about the shifting varying during a ride.....can it be that after you have been riding for a while, you forget to "nurse" the changes?

All the rings are relatively new and haven't many miles on them.
All supplied by Spa and the outer two fitted by them; I had earlier fitted the inner ring but decided to lower the other two as well.
I think there is some grime on there which may be masking things.
I will try with a different camera to see if I can get some better shots.

All was peachy until I managed to jam the chain around the front mech somehow.
After that I have being trying to get it back to original performance, and nearly there but not quite.

Once I had an issue changing down during the ride I tried to be extra careful but that didn't help.
I have a vague suspicion that it will change down better if in a higher gear (smaller cog) on the back.
This suggests that a diagonal chain line catches the FD more effectively than a parallel chain line or one angled in toward the frame.
However I haven't had time to test this further at the moment, what with trying to sort out the saddle and live a complicated life as well.

Hi, agree indexed mechs can be a pain to set up. As a quick fix check that your cable is free moving and that the shifter is not lethargic. If it is squirt some solvent in followed by spray grease. Reinstall the cable taking care to not over tension. For a more involved fix and looking at your pictures it appears like your mech is set quite high and also not quite parallel with the outer chain ring. This will effect the change. Try dropping the mech so the outer cage is 2-3mm from the outer ring at the closest point, also loosen the cable clamp and mech clamp bolt to align the outer mech cage so it is parallel with the chainring, again make sure the cable is not too tight. Don't be afraid to gently tweak the cage plates to sweeten the change.
Top

Hard to see from the photo, but it doesn't look as though the cage can be lowered much as the rear looks close to the chainstay.
"It takes a genius to spot the obvious" - my old physics master.
I don't peddle bikes.
Top

Remarkably little chainwheel tooth wear will compromise changing. Photo of my worn chainwheel here...viewtopic.php?f=5&t=116834&hilit=reverse&start=30
Symptom was that changing down to a smaller ring, the ring the chain was on didn't really want to release the chain.....so I got very reluctant shifts, unless I did it "just right" and also the chainring could hold onto the chain at the bottom so the chain didn't peel off the chainring and got tangled up in the F. mech. ("chain suck"). I don't remember any problems changing up to a bigger ring.
Bike fitting D.I.Y. .....http://wheel-easy.org.uk/wp-content/uploads/bike-set-up-2017a.pdf
Tracks in the Dales etc...http://www.flickr.com/photos/52358536@N06/collections/
Top

531colin wrote: ↑20 Sep 2021, 7:06pm <snip>
I'm interested in the wear state particularly of the middle ring.....can you put a bit of white card between the big and middle rings and photograph the middle ring teeth against the white background? Also the big ring teeth, while you are there.
<snip>

Having come back to this and had a good look at the photos instead of just posting them then moving on to the next urgent thing the teeth on the centre ring don't look quite right.

The outer two rings were new 28th June 2020 and I haven't done a lot of miles since.
I normally do 25 miles each Wednesday in a group ride but miss out big chunks of riding when away on holiday.
I also alternate between the Spa Wayfarer and my MTB depending on the route.

One the mixed rings - when I bought the bike there were no black rings available so I agreed to all silver.
Later I replaced the small ring with smaller, again with silver.
When I had the other two rings replaced I decided to get the more usual black, but keep the silver inner.
I assume that as they are all Spa branded that they should be of similar specification.

I will post more photos when I have beaten off the alligators and get back to draining the swamp!
Top

In your seatpost threads, we have the same post sold under I think 3 different "brands".....Velo Orange, Holdsworth/planet X, and somebody else.....I think one "brand" has a longer seatpost than the other 2........ EDIT....J tech....?
What this means is that a factory is making these posts and putting 3 different brands on them.....so these posts from 3 different "brands" have an awful lot in common, but you wouldn't expect (for example) the bolt out of a different Velo Orange post to fit this "Velo Orange" post, because they might have nothing in common at all.

Its the same with chainrings. Some of the Spa rings come in black or silver, and I would expect to mix black and silver rings of the same sort with no problems. However, a silver "New Vision" inner ring might not work well with a black "Zicral" middle ring, because they might come from different factories, and have different tooth offsets etc. I can't tell from a photo that this is or isn't what you have got.

As far as I know they are all Zircal.
I hope!

Will it say that somewhere on the ring?
Top

Will it say that somewhere on the ring?