by ElaineB
Does anyone know whether an FSA mountain bike chainset with chainrings 42/28 would work with a 105 (10spd)front mech? I am trying to lower my gears from a compact 50/34 and wondered if the above would work before I venture down the triple road. OR... would a mountain bike 12-34 (10 spd) cassette be better with a 9 speed Deore (or similar)rear mech? Would that combination work with 105 (10spd) levers? I have been told by a knowledgeable source that the old 9 speed mountain bike rear mechs (Deore or similar) work with 10 spd levers, has anyone done this successfully? Many thanks for any help, I have asked many people but the dury is still out!

by wirral_cyclist
I've two bikes on 105 (both are triples) with 48/38 and either 26 or 24 on the inner and are 9sp and 'old' 10sp respectively, 9sp is on a acera shadow rear mech but 10sp on a std medium 105 rear mech.
Rear cassette on both are MTB. I don't think current 10sp front will shift MTB rear spacing though.

by PT1029
Your question covers a complicated area. Not the answer you will be looking for, but here goes :-

Google "shimano gear compatibility chart" (you will get some covering different model years),

You need to know your model part numbers..... (on back side of F gear cage, on back side of inner shifting arm of rear gear, on hoods (under rubber cover, peel back to see) of STI levers).
Your best bet is someone who has already looked/tried comes up with the answer for you.

Not very helpful, I have to say its an area I try to steer clear of!
Open to correction by those who have tried, or trawled through the compatibility charts

by Brucey
the problem you will have with the FSA chainset is that the MTB chainset runs a different chainline and a 'road double' front mech may well not reach out far enough to reach the big ring on the MTB double, even if it looks as if it might work in other ways.

If you try to use a MTB front mech with a 'road STI' then you will soon find that the cable pull is completely different. Shimano do make one or two oddball mechs that can help in this kind of situation but these are mostly for triples and may still cause problems of various kinds.

If you use a Spa cycles triple chainset, but simply remove the outermost chainring, and fit it in the middle position, you can run a double with the ratios you want, at a 'road' chainline.

If you are feeling spendy then a Middleburn chainset is a good solution.

Note that both the latter approaches allow you to change the chainline and/or to use three chainrings in the fullness of time should you so desire.

by ElaineB
Thank you for your help.... One thing I did forget to mention was that my bike is a Cannondale and has the added 'problem' of a BB30!
How can I get a larger cassette (12-34) to work with what I have already? Are there any long cage rear mechs that I could replace my 105 (10spd) one with that would work with the 105 10 spd road levers that I have on the bike now? Many thanks.

by recordacefromnew
You didn't say what shifter you have, but if you have a 10 speed Shimano road drop bar brifter then as you have been told a 9 speed Deore (and indeed any Shimano 9 speed mtb rear mech) will let you run a 10 speed wide ratio sram or Shimano cassette just fine.

Depending on your existing cassette large ring size and existing chain length and condition, you may need a new, longer chain to go with the new cassette.

by ElaineB
I have 10 spd 105 road shifters, so do you think I could put on a Deore 9 speed rear mech and a large 10 spd 12-34 cassette (mountain or road?) I have also seen that the Tiagra 4700 10 speed med cage would handle 12-34 cassette but can the road 10 spd rear mech and mountain 10 spd cassette mix? Which combination do you think would work best, if at all! Thank you very much for your help, I feel I am finally getting closer to understanding this crazy situation that Shimano has created, which certainly is not user friendly.

by Brucey
you can get BB30 converters but TBH the easiest thing is to upgrade at the rear; a 9s MTB mech ought to work fine with your shifters and if this (plus chain and cassette) gives you low enough gears this is the path of least resistance IMHO.

ElaineB wrote:I have 10 spd 105 road shifters, so do you think I could put on a Deore 9 speed rear mech and a large 10 spd 12-34 cassette (mountain or road?) I have also seen that the Tiagra 4700 10 speed med cage would handle 12-34 cassette but can the road 10 spd rear mech and mountain 10 spd cassette mix? Which combination do you think would work best, if at all! Thank you very much for your help, I feel I am finally getting closer to understanding this crazy situation that Shimano has created, which certainly is not user friendly.

Both would work fine. Not all road 10 speed rear mechs have enough capacity to work with a 34T cassette, but the 4700 would.

The advantage of a 9 speed Shimano mtb long cage rear mech is that it can let you go much lower if you wish, while the 10 speed 4700 road mech has jockey wheels better suited for your 10 speed chain, but it is a difference you are unlikely to notice.

by ElaineB
Great help, thank you all so much. I really appreciate you taking the time to answer my query.
Kind regards and happy cycling. Elaine B.

ElaineB wrote:... would a mountain bike 12-34 (10 spd) cassette be better with a 9 speed Deore (or similar)rear mech? Would that combination work with 105 (10spd) levers? I have been told by a knowledgeable source that the old 9 speed mountain bike rear mechs (Deore or similar) work with 10 spd levers, has anyone done this successfully?

Your question has largely already been answered, but I thought I'd just throw one more thing in to the mix: 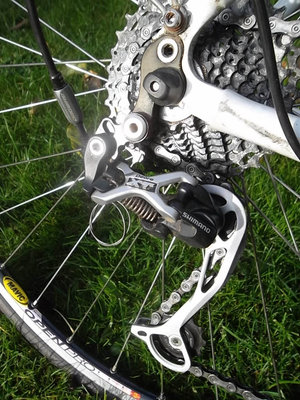 I wouldn't claim that this is necessarily the best place to put an inline adjuster, but I found it ideal when I had the bike on the stand and I was turning the cranks with one hand and adjusting the barrel with the other. (Again it may not be ideal, but I cut the outer cable perhaps an inch from where it fits in to the derailleur and fitted the adjuster between the two pieces of outer cable.) Incidentally, I would recommend that you get a 'Shadow' model if possible as, amongst other things, they stick out a lot less than other rear mechs - useful if your bike goes over on the drive side. If you do get a 'Shadow' rear mech you could also choose to go larger than 34T with the rear sprocket. I believe SRAM do a 12-36 10spd cassette at various prices. 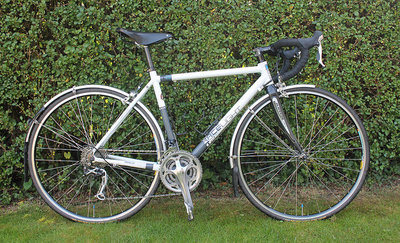 by Timuk
I have a setup with 105 shifters and a 9 speed rear xt mech. Works flawlessly with an xt 10 speed 11-36 cassette and 10 speed cassette. I also run an xt triple chainset with the 105 front mech which again works very well. This set up gives me a lowest gear off 24 front 36 rear, enough to ride up the side of a house

by ElaineB
Thanks for that, that was what I was actually told but questioned whether it was actually possible! Great to hear it works for you and hopefully will work for me too. By far the cheapest way to go lower...many thanks.

by wheel71
I also use a shimano 10speed brifter with 9spd rear mech no problem.
I have just fitted a deore 38/24t double chainset on the bike (surly lht) and the 105 double shifter works absolutely fine with it. Mine is a "BAND ON" front mech, if yours is "braze on" it may not go low enough but chainline was no problem.
I can pedal up to 45kmh no problem in top gear (38-11 with 26" wheel). Lower gear range is a pleasure after a compact.

by foxyrider
what is a 'brifter'? speak English please, the word is shifter using anything else makes you sound like complete numpties!