I was having a sort out over the very wet BH and found an old Karrimor catalogue form the mid to late 1980s. I've still got and use the Karrimor bike bags I bought then(Rear Bag 1 saddlebag, Standard panniers & Camdale) although with a few repairs & mods over the years. The Camdale is now used with Rixen Kaul mountings and the other bikes have had light loops added.

I've attached a page scanned from the catalogue giving all the bike products as this stuff is often offered for sale and it helps with identification. 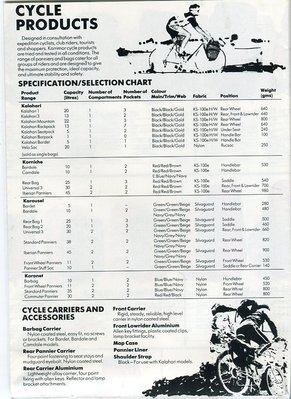 Oooo good find. I'm still using a pair of Bardale rears and a pair of green Korniche Iberians. Even though I also have Ortleib's, I still prefer the old Karrimor green stuff. (-:
Top

Kalahari and Iberian are the two names I remember from that list. I never had any though, I had Agu panniers. Blue, a fairly flimsy nylon or polyester material. I remember the dangly hooks – one got chopped off in my spokes! I was lucky, I suppose, that it the cord broke rather than bringing me to a skidding halt. I no longer have those though. I think they were cheaper – in price and material – than the Karrimor stuff.

Any chance of some photos of your Karrimor bags?

Any chance of some photos of your Karrimor bags?

Yup, if I could work out how to get pics up on this forum that are bigger than 256KB!
Dawes Galaxy 1982; Raleigh 3 speed 2007; Brompton M6R 2006
One of the most important days of my life was when I learned to ride a bicycle - Michael Palin
Top

Good ol' days, before Sports Direct came in and it all became "global"
It is by riding a bicycle that you learn the contours of a country best,
since you have to sweat up the hills and coast down them.
Thus you remember them as they actually are...
Top

The story of Karrimor as related on Wikipedia https://en.wikipedia.org/wiki/Karrimor really is dismal from the mid 1990s onwards.
How on earth could a world beating company end up like that?
Dawes Galaxy 1982; Raleigh 3 speed 2007; Brompton M6R 2006
One of the most important days of my life was when I learned to ride a bicycle - Michael Palin
Top

I don't know how true that can be, very likely it is? But I always heard from friends that back in the day Karrimor was a brand that would only sell quality products. Now they sell cheap stuff (as "low price").
If wasn't for the terrible S.D. shops, it wouldn't be too bad. Some items are cheap, but work decently or well, so the Q/P is good. I.e. they make some good quality drysacks at competitive prices.
It is by riding a bicycle that you learn the contours of a country best,
since you have to sweat up the hills and coast down them.
Thus you remember them as they actually are...
Top

A certain amount of modification & repair over the years:
1. Base board replaced with one made from varnished plywood. Stops it sagging quite as much
2. Zip on top pocket replaced after breaking
3. Straps replaced with Carradice ones. I lost one and the others aren't really stiff enough
4. Light loops added

And finally the Camdale (Padded bar bag for cameras)

The bracket is a Rixen Kaul one but I still have the old Karrimor version. I had to wrap handlebar tape round the bars where it touched them as it tended to wear them away. The shock cords aren't needed with the Rixen Kaul mount & bag removal is much easier.

I still use these bags as well as the Carradice ones they replaced. They have lasted very well.
Dawes Galaxy 1982; Raleigh 3 speed 2007; Brompton M6R 2006
One of the most important days of my life was when I learned to ride a bicycle - Michael Palin
Top

Thanks, OGB. I do like the look of those bags and they must have been pretty well made. In fact, they seem in many ways comparable to Carradice's present products. Looking at the panniers, I do think worthwhile progress has been made in attachments though – I'm glad not to have to use those dangly hooks anymore!
Top

I had a pair of Karousel rear panniers in green from the very early 80's. They got a lot of use, and showed it, but a few years ago, my neighbour and his son decided to start cycling and tapped me up for any spare kit, especially panniers. I had just treated myself to some new Carradices, so I passed them on. They're still trundling round Suffolk.

I hadn't really given them any thought recently, but looking at the Wikipedia entry, it really is a sorry story of asset-stripping and betrayal. All very Joni Mitchell "You don't know what you've got till it's gone", and so typical of the UK since at least 1979.
Top

Just read the Wikipedia page. I hadn't realised quite how close to Carradice Karrimor's origins were! In some ways you might have said that if only one company was able to survive it should have been Karrimor, being the more innovative. However... I'm glad that at least Carradice survive.

I have a (fairly large) Karrimor backpacking rucksack I bought in 1996 (ironically from a YHA Outlet) which seems to be still in pretty good nick. I guess that was one of the last years in which they were still making decent stuff.
Top

I had a Karrimor Kalahari jacket that served me reasonably well apart from the embroidered name on the sleeve unraveling and the zip needing replacing it was a good jacket, shame it didn't stretch to accommodate my belly

As well as the panniers I've a large backpacking rucksack and a daysack from Karrimor dating from the late 1980s. Both are in very good condition. The daysack has had lots of use and is now my allotment bag. Basically its just faded. Its in much better condition than the rucksack I bought about four years ago for work which has needed a number of repairs.

Karrimor stuff was never cheap but it was well made and designed allowing that bag mounts have become much better. A great pity they ended up in the mess they did. It really is a tale of modern business. One can't help thinking that it wouldn't have happened in Germany where businesses like Karrimor e.g. Rixen & Kaul, are the backbone of the economy. Never mind, at least we can always sell each other mortgages...

Bag mounts have certainly improved a great deal. Take a look at these 1970s panniers and there leather straps!

Here are the bags on a bike

Obviously there must be a de facto standard for the width of barbags as the new Klickfix frame fitted the old bag.
Dawes Galaxy 1982; Raleigh 3 speed 2007; Brompton M6R 2006
One of the most important days of my life was when I learned to ride a bicycle - Michael Palin
Top
Post Reply
24 posts