So far, I've bunged a pair of 26" x 1.75" Marathons, a Tubus Logo Evo rack and some decent bottle cages. I'd really like to swap out the 1 1/8" Rock Shox Indy C (60mm travel) fork for a rigid steel fork with mudguard and lower mounts for a Tubus Tara front rack. It's 425mm from centre of axle to underside of the lower crown race.

I'm struggling a little to find a suitable replacement. I was hoping I could use a Surly LHT fork, but at 376mm, I guess that's going to be too short and would seriously affect the handling? Do I need to consider offset/trail etc?

Any help would be appreciated, I'm a bit out of my depth here!

The Surly Ogre fork looks like it could be spot on, thanks for that

I'd look to SJS for that. Sounds like a nice project.
Top

Top choice of bike, I used one of a similar vintage for the past two years for commuting, touring, trail centres and around New Forest and it was the cheapest two years riding I've ever had!

Now replaced with a Surly Troll, can second the suggestion for using a Troll/Ogre fork to give you all the mounts you need and then some, crown to eyelet mine is about 440mm (not precise, measured with a tape measure as best I could around pannier frame)
Top

Personally I'd aim for a tad shorter than 425mm, not longer, but would also try and measure the existing trail (on MTB tyres) and try and match that too.
"42"
Top

I assume that when you sit on the bike the front fork will compress a bit? I'd be looking for a fork that matches that compressed length.
Top

Thanks for the advice all, went for a Thorn tour double-plate with a 403mm A-to-C. No option for a Surly fork as all models seem to be in short supply at the moment anyway.

Tubus racks, trekking bars, SKS Chromoplastics and some DMR bottle mounts and its now a great little touring rig, and handling & steering seem better than before. Obviously the most important thing to my lad is the compass bell and hooter mind 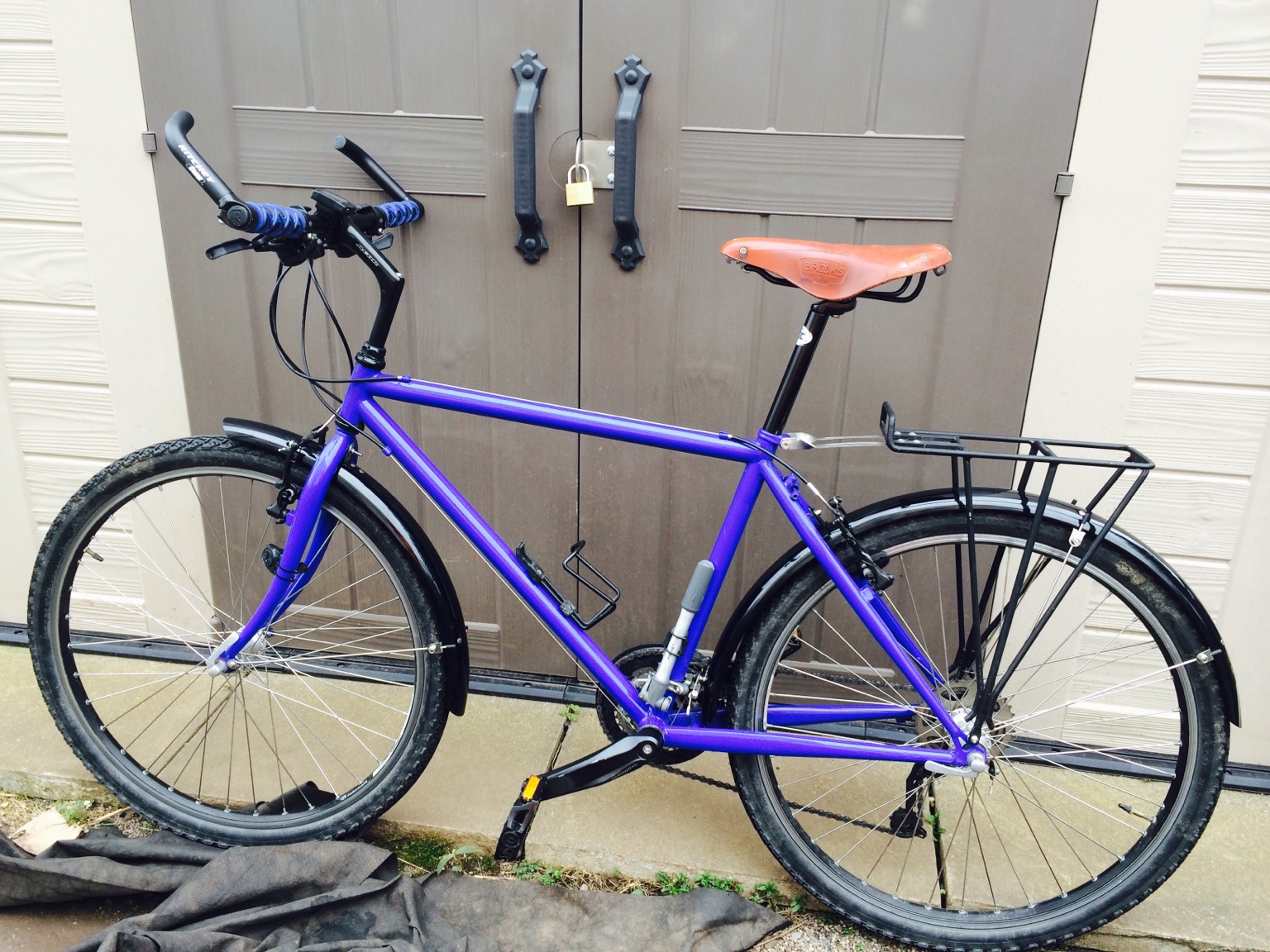 This is my Rockhopper Comp Tourer which I love dearly!

This thread has given me some inspiration. I was thinking of getting rid of my Rockhopper as I just don't do the sort off-road cycling that would justify/need suspension, then putting the cash towards a trekking/expedition tourer as I'd like to be able to tour on rougher roads than my Galaxy can handle.

My Rockhopper's the basic 2013 29er model http://imgur.com/vYR3GaQ It now has grippier pedals and mudguards too.

I really like the idea of swapping the suspension fork for the Ogre fork (it looks like it won't be available until early 2017, but that's no problem), but I was wondering if it matters at all that this is an aluminium frame, not steel with regard to how suited it'll be to touring? I wouldn't be looking to massively load it, probably a couple of rear panniers, tent and some sort of handlebar bag.

Also, what tyres would people recommend? I'd need one that's not too shabby on the road, but that can grip in gravelly or muddy corners.

I wouldn't worry about frame strength too much, unless you're planning to ride it like a mountain bike whilst laiden with touring gear

Tyre wise, depends where your emphasis lies really, racing ralphs are on the faster slicker end of mountain bike tyres and roll well, go for the snake skin version though.

They have low centre blocks for rolling, and more pronounced side blocks for when leaning on corners. If ypu want something more tarmac orientated, then you're looking at semi slick commuter/touring tyres.

The other approach would be to use a full blown road tyre and just be careful on looser surfaces. I don't think I could go back to using a block tread on the road. The buzzing would take all the pleasure away. Personal, I know!
I did have a fall last year when I rode into some dry drifted sand on a bend, but I can't imagine a tyre that would have coped much better. The other difficult thing is wet grass. Not staying on - just getting moving in the first place!

Lost of people have made mountain bikes of this generation into tourers. Even the mighty (

) C+ has done a couple of "how to" articles. One suggestion I recall is that it might be useful to at least consider changing the stem to a shorter and possibly higher one as mountain bikes were originally kitted out with a rather long set up to help with getting your weight over the front for steep climbs. So if you're not quite comfy...
Trying to retain enough fitness to grow old disgracefully...
Top

Thanks for the replies. The Racing Ralphs are definitely a possibility, and I also really like the look of the Marathon Tours. I guess it's handy that the Ogre fork isn't available for a few months as it'll give me time to work out just which routes I want to cover with the bike which can then inform my tyre choice.

I hadn't thought of the stem, so I'll bear that in mind.

EDIT: Plus, Before even venturing to the shop to order any parts, I'll have some time to swap my rear rack over from my Galaxy for a couple of rides to check that I'm not going to have any problems with heelstrike and to get an idea of how rideable it is while loaded.
Top
Post Reply
13 posts • Page 1 of 1