For discussions about bikes and equipment.
Post Reply
43 posts

Anyone got any good roadside bodges to share? I think it's useful to have a mental library of these sorts of things because you never know when the unexpected will happen!

Thought I would share this on the offchance it might help someone else out. Unbeknown to me, my rear gear cable has been fraying near the shifter and snapped about half in inch from the nipple in spectacular fashion during a downshift up a big hill. Cue derailleur shifting to smallest sprocket almost causing me to fall off. Pushed to the top of the hill where I found a handy gateway to work in.

I've heard of the bodge which involves setting the derailleur in a reasonable gear by trapping the cable in the bottle cage bolts, but being 30 miles from home, I wanted to see if I could manage a better fix which would allow me to change gear.I cut the frayed bit off (easier said than done), let lots of cable through at the derailleur end and cannibalised a nut and bolt from my rack to make an ad-hoc pinch bolt. I think I may add some spare nuts and bolts to my travelling tool kit, and possibly a mulitool with proper wirecutters.

Aint pretty, but it got me home: 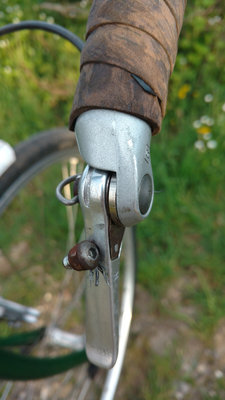 I would have just tied a knot in the cable letting out the excess at the derailleur. Not quite so easy if you have STI's.

IMO that's a good 'bodge' if you're in 'Outer Mongolia'

and your spare cable's been used already,but generally I have to agree with the other posters that carrying spares is a tried and trusted better alternative.
A few 4mm bolts a crank bolt,a few m/guard stay bolts,1 rear brake,1rear gear cable,couple of tubes,p/repair outfit,tyre boot,a selection of zipties,even a pair of brake pads,all of which weight very little at make for quick roadside repairs.
These items are of great value and I never go out without them,particularly in winter.
-----------------------------------------------------------
Top

So do I Colin - and I learned to do that when I had my first experience of pinging nipples. Every time something bad happens, it's the experience by which we learn.

Some 30+ years ago I had both brake cable nipples fly off at the same time on the same brake application on a downhill approach to a fairly major roundabout on my way to work. The motorist coming from my right onto the roundabout probably saved my like by being quick acting and considerate - I didn't have chance to thank him. The cables were brand new, and must have been from a bad batch - the LBS took them straight off the shelves and got me some replacements from a further batch.

I hadn't anticipated such a complete double failure, but that particular brand of cables (and it was a well-known up-market brand) came in front and rear brake cables in those days - so I had two spare cables in my saddlebag! - the spares were OK and, as far as I remember, lasted for ages.

I recommend taking four spare gear cables and four spare brake cables, on the basis that something may go wrong, and we need to carry spares, and if we do need to use one, we still have a spare set.
Top

t'other day I was without my shifter (it was required to save someone else's machine from total dereliction, so my own bike became a 'donor'...

) and I needed to ride home on my IGH-equipped machine with no means of shifting, with it defaulting into one extreme gear.

I used a straightened paperclip as a short 'cable' in the pinch bolt, having made a crude hook shape in the other end. The hook was engaged with the cable stop. This allowed me to select a single (sensible) gear and ride home without too many problems.

My IGH defaulted to high gear but it would have been at least as awkward had the gear defaulted to low gear (as many do). I daresay the same bodge could be used to set derailleur gears when the cable breaks, should the adjustment screws not offer enough travel.

No substitute for being sure that your cables are in good order though, if cable breakage is a concern.

BTW I rarely change both brake cables at the same time, in part because this mitigates against the possibility of a bad batch of cables leaving me with no brakes.

There were many time in my younger days that I used various roadside bodges, or rode home with only one gear or one set of brakes available to me. I went miles from home in my youth without taking any tools or parts with me. If I was thinking ahead (or planning to be gone for a few days), I might have a puncture kit and a pump strapped to my top tube. On a few occasions, I walked part of my (11ish miles) trip to home or school because of this. I can also recall once or twice stopping at a garage and borrowing tools so that my brother or I could fix something on one of our bikes when we were far from home.

Now, I go out much better prepared, but I almost never use anything on my own bikes; only on other people's

The one time in recent years something went wrong enough en route with my bike to make it unrideable (the winter before last my chain broke), I had the wrong parts with (one of the problems of using more than one bike; remembering to switch parts carried with). I had a quick link for my 7 speed drive train in the bag, but I was riding a bike with 9 speed drive train. So I put my bike on the bus (I can do that, here

) and got a lift most of the way to work. The trip from my work to the bike shop is mostly downhill, so I walked a little bit, then freewheeled to the bike shop and bought a new (the right!) quick link for my chain.
“In some ways, it is easier to be a dissident, for then one is without responsibility.”
― Nelson Mandela, Long Walk to Freedom
Top

I always carry a spare powerlink and chain tool, after one occasion last year, when my chain snapped going up a 1 in 8 climb. Had to get the wife to ride home and fetch the car.

One bodge I've heard about but never had to use - if you've run out of spare tubes/patches, then tie a knot in your punctured inner tube, where the hole is. This should then seal the hole and enable you to inflate the tube.
A cart horse trapped in the body of a man.
http://www.jogler2009.blogspot.com
Top

Here’s a bodge for fixing a flat when you have no conventional way to fix it. Worth knowing about?

Edit: beaten by seconds! Still, have a look at the video.
Top

I was out with a friend when he punctured because he had worn a tyre tread through the canvas so the tube bulged and rapidly deflated. A replacement tube was at hand but would naturally quickly succumb. I used a mudflap as reinforcement, insisting that it should be his.
I have read that banknotes will do the job, but am doubtful.
No doubt other materials would do the job.

I have had a freewheel face plate unscrew, spilling balls on the road. Reassembly (a few short) using a screwdriver and a stone worked. Minimal freewheeling got me through the rest of the ride.
Top

Ooh! forgot to mention Powerlinks previously.
I carry 8 and 9sp Sram ones ATM,coz the new Circe is on 8sp with 8sp chains,whereas my other bikes are either 8sp or 9sp but with 9sp chains running on both systems(they work well on both),but when the 8sp chains wear out on the Circe I'll use 9sp chains on it as they're almost the same price

Mike Sales wrote:II have read that banknotes will do the job, but am doubtful.

Plastic bank notes work fine, e.g US dollars and our UK soon to be released plastic fiver (I think it is the £5 note)

Quick links - because I use different sizes of chain on different machines, (1/8", 8 spd and 10 spd) instead of carrying each as a spare I put an appropriate one in the handlebar end plug.
Top

I heard a story (perhaps Apocryphal!) about a CTC tour of the highlands in the late 50's. Apparently someone hit a massive pothole with a fully loaded bike, and boom! Right hand fork blade broke about half way up and rider came tumbling down. They were by Lairg which is about 30 miles from anywhere, completely remote, so some wiley carpenter among them got a largish branch from a silver birch and whittled a new fork blade, complete with drop out and then rammed that into the half of the fork remaining.

Story goes they were able to carry on to Inverness, albeit at a slower speed where they traded up their woodworking for a brand new pair of forks