I have just had some wheels supplied & built. The wheels are these;

They can be bought machined & non-machined

Every time i use the front brake i get an annoying rubbing noise because the V-pad is hitting the joint. See photo. I can catch my nail on the joint its that pronounced. 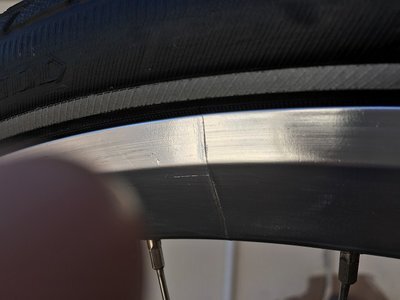 My question is have i been supplied with non-machined wheels?

such things were common when rims were not machined but this is rarer now. Occasionally a machined rim will move at the joint a little when the wheel is built, giving a step of that sort. It shouldn't happen but it does.

I would ask the vendor if they think that is 'normal' and consider rejecting the wheels.

However the step feature will disappear in time by itself, and if it is a front wheel, its effects can often be made less pronounced by turning the front wheel the other way round.

When this feature was common I would use a fine sharpening stone to rub it down.
Top
Post Reply
3 posts • Page 1 of 1