I have a 26" (559 mm) wheel bike that I use for riding around town. At the weekend I fell off while riding on a rough track through a field, and the fork now is bent, so that the steering pulls to the right. We tried clamping the fork in a vice, and also hitting it with big heavy things, to no avail.

I had been thinking that it might be nice to change from cantilever to a hub brake at the front. Since the fork now needs to be replaced anyway, perhaps this is a good opportunity to do so. I gather that using hub brakes on a fork which is not designed for that purpose is a bad idea. However, I haven't been able to find any 26" (559 mm) forks suitable for hub brakes. I have been able to find a 26 * 1 3/8 (590 mm) fork for hub brakes.

Alternatively, perhaps a bike shop could bend the fork back for me? Or is it permanently weakened?

Maybe using a regular disc fork with an adaptor is an option.

I used to have a Halfords Carrera Subway 8 bike with 26" wheels that had a disc tab fork and used a "converter/adaptor" that allowed a Shimano drub brake to work. Here's a snap from the web. 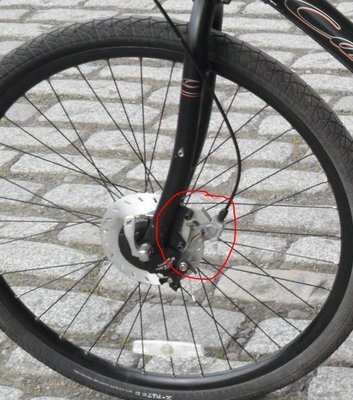 Sorry no idea about the geometry question change part.

Alternatively I think that an MTB fork for cantis would normally be strong enough for use with a hub brake. Just don't do stoppies with it.

BTW most steel forks have be cold set a bit, but there is a knack to it. A bench vice is not very helpful; if you have not done it before you are just as likely to crush the tubes as straighten them if you use a bench vice.

A cheap option below - not much clearance maybe, but drum compatible and cheap

Thanks for the helpful replies.

Gerry: Yes, I think using a disc fork could be a good idea. Even if I don't use the mounting holes for a disc caliper, I could use a strap to hold the hub reaction arm on. The fork would be designed for taking braking forces in this way.

Brucey: The Pashley fork looks good. But where could I buy one? Do they sell them on their own?

It is good to know that a normal cantilever fork should probably be strong enough. But I guess a disc fork would be even better?

We clamped the steerer tube in a large woodwork vice and pulled on the fork legs. When the fork is out of the bike, you can see that the steerer is bent to one side. When it is in the bike, the headset doesn't turn properly because it is at an angle. I guess as replacement forks can be had for about £25, it is probably not worth getting a bike shop to bend it back?

Benjamin: This is the fork I was thinking of earlier. If you look very closely in the description, you will see that it says 26 * 1 3/8. Otherwise it would be ideal!


Another thought which I had is that it might be cheaper and simpler to use a disc brake. I'm sure I could get a 26" disc wheel for about £25, whereas the SA hub alone costs £55. I guess a mechanical disc brake is still reasonably low maintenance.

Have you considered a V brake?
Might be easier to find a fork for that, they're good but admittedly not as low maintenance as hub brake.

Is your fork 1" threaded?
Top

Gerry: Yes it's one inch threaded.

I've had a look around and a think, and a plan is coming together.

I'm going to use this fork:

Somehow I overlooked it earlier. On the Dutch version of the page it says that it has a bracket for drum brakes. It has a long enough steerer and is the same colour as my bike.

I'm going to use a Sturmey Archer X-FDD brake and dyno-hub. I currently have lights for a bottle dynamo, without a switch, but I think that rather than adding a switch somewhere I will just leave the lights permanently on. I gather that with this particular hub the drag is much the same with lights on or off, and a bit of extra visibility doesn't go wrong.

I did think about getting the 2.4 watt version as it's probably enough for my B&M LED lights, but perhaps it's silly to use the "wrong" dynamo when you have a choice.

I'm probably being a bit over-cautious about getting a fork specifically for drum brakes. I think one reason for this is that a friend had an early Salsa Vaya where the forks bent above the disc mount! (It got sorted out in the end). One bonus of the fork I have chosen is that it doesn't have ugly extra mounts for different kinds of brake.
Top

You are welcome to this pair for the price of postage . . . if the 1inch steerer is long enough complete with headset.
Ps the wheels off these are 26 by 1.5 inch. 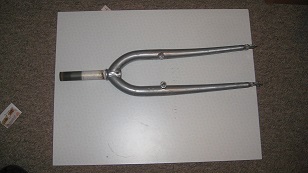 Thanks for that. Unfortunately I don't think the steerer tube will be long enough - needs to be about 25cm for my bike.

But thanks anyway.
Top

I bought and fitted the fork from Holland bike shop that I linked to earlier.

However, I have a concern. The stem is rather a loose fit in the steerer tube. When the quill is tightened, there is still some play between the fork and the stem. (Just to be clear, I am not talking about a loose headset. The stem is waggling inside the steerer tube). Should I be concerned? I've never come across this before. Perhaps I should send the fork back?

Also, getting the bottom bearing race onto the fork was very difficult. I took it to the Local Bike Shop, and it required a monstrous beating with a hammer. The LBS man said he'd never come anything like it before. This makes me wonder if the fork is not very well made, as it is not very precise. Is there a standard tolerance for these things?

Unfortunately the bike has started to shimmy at say 12 mph, when I take my hands off the handlebars. It didn't do this before. However, I have made some other changes as well as the fork, so I can't say for sure if that is the cause. I was wondering if the frame could have been bent when I fell off. Could this cause shimmy? I would be surprised if the frame had been bent - it seems fairly sturdy, and I don't think it was such a bad crash.

The hub brake is good (I got the one without the dynamo), and I am enjoying the nice smooth bearings in the hub.
Top

if the stem is a bad fit it could be that the steerer is oversize or that your stem is undersize (e.g. 22.0mm French spec...) . You need to measure to be sure. If you want a simple (but usually effective) cure, wind a few turns of PTFE tape around the stem before pushing the last couple of inches in. This will take up the gap.

Crown races vary in both size and tolerance. A good LBS would usually have a set of cutters to prep forks to 27.0 or 26.4mm (which are the two common sizes) but there is no guarantee that your crown race was perfectly machined and if (say) the paint wasn't removed first, this can cause all kinds of trouble.

Shimmy can be caused by all kinds of things, including more flexible forks, forks with the wrong offset, that kind of thing. I have seen many sets of cheap aftermarket forks for Dutch bikes that were somewhat un-confidence inspiring, so if you can't see anything else that might be different, it could perhaps be those.

The shimmy problem is now solved! The new wheel came with two washers on each side, so I thought I'd better use them. The fork had a circular, slightly recessed area, which was a little smaller in diameter than the washer. The washers had to bend a little, which I thought was OK. Anyway, I took the washers off and the shimmy stopped.

The stem was sold as being 7/8". It fitted well in the original fork. The bike is a Peugot, so I guess it could have had a 22 mm steerer. Seems a bit unlikely to me that the stem should happen to be under-sized, such that it fits perfectly in a (possibly) 22 mm steerer but not well in a 7/8" one.

I think the fork may have a little less rake than the original. It is also chunkier, giving less of a springy feel over bumps.
Top

I gather that using hub brakes on a fork which is not designed for that purpose is a bad idea.

That's certainly the case for discs. I don't think it's an issue for drum brakes. You see them fitted as OEM items to all sorts of bikes with very non-special forks. I've never had a problem with one on a normal fork.
Top

At the same time as replacing the fork, I switched from a front rack that turns with the steering to one that is fixed to the head tube. When I put a particularly heavy load on the rack (such as a very large number of cooking apples), the steering "squirms". I can still definitely keep the bike under control, but I can feel the steering pulling from side to side, kind of like a shimmy. I'm not sure if this is just one of these things, or perhaps it's a sign of something not being quite right.
Top
Post Reply
17 posts