by Roadster
My Alfine 8 is about due for its first service and I'm thinking of switching over to Penrite Semi Fluid Grease:-
http://www.moss-europe.co.uk/penrite-se ... 9029x.html
This is described on several suppliers' websites as being also suitable for LandRover front swivel hubs.
Has anyone tried this in an Alfine hub and with what results? Any reason why not?

by mjr
I switched to Land Rover front swivel grease in my nexus 3 hub and it certainly seemed to coat the innards more consistently than the recommended grease, but I've only had it to pieces twice in the months since switching (failing left bearing) and don't intend to inspect it so often, as long as it keeps working smoothly.

by Brucey
The Penrite SF grease appears to be a bit like the Castrol Spheerol EPL00 grease. This can be thought of as being similar to EP (hypoid) gear oil with thickeners and one or two other additives. It is similar to what SA use in their hubs too, but they don't put enough of it inside the hubs and it (for whatever reason, maybe they use EP0 rather than EPL00 ? ) isn't very mobile in the hub. All these greases are amber/brown in colour (a bit like Castrol LM).

by Roadster
It's the "black and horrible" aspect of the Land Rover stuff that puts me off it, and its virtue of being long-lasting isn't a great advantage since I'd actually prefer to renew the grease every couple of years than simply rely on its claimed longevity. Besides, it does seem a tad overkill for a bicycle hub used only in dry conditions as mine is.
Provided the Penrite acts as a viable substitute for Shimano's "refreshment" schedule and is perfectly adequate for the job, surely it doesn't need to be any better than that, just for the sake of being...

by Brucey
the problem is that we don't know what the specification of the shimano grease is, exactly. However you can take an educated guess that it ought to be a better quality grease than is necessary in an SA hub because the pinion pins in shimano hubs are, by and large, smaller and/or more heavily loaded than in SA 3s hubs.

by mjr
The Land Rover grease is more grey and syringeable than black and horrible and the sachets are 350ml or so and will last a pretty long time. I'm not sure why you wouldn't use it.

by Roadster
Well, one reason might be that a bicycle hub looks much more like a gearbox than it does a swivel hub.
Another might be that we know as little about the swivel hub grease as we do about the Shimano stuff, whereas Penrite and Spheerol are at least verifiably conventional in their specification. Moreover, they're specified for other heavy-duty industrial applications, not just gearboxes.

by Brucey
the Penrite and Spheerol greases would be classified as 'not good enough' for a whole variety of low speed, high load applications. Read my earlier comments about speed and load.

by mattsccm
Are you in a rush to know?
I can wander along the track to the/a Penrite unit some time today and ask.
I am trying some of their food grade grease as a chain lube. It melts to liquid very easily then goes solid again, a bit like Linklife does.

by Roadster
Thanks but there's no point asking Penrite - they're bound to say it'll be fine! No rush either, but I do need to make the decision quite soon in the interests of preventive maintenance.

If Shimano's official WB oil weren't so ludicrously expensive, I'd just replenish with that but it goes against my principles and the cost really does stick in my craw. Nevertheless, I may just suck it up anyway if only for the sake of speed and convenience.

by Brucey
if you want quick and easy, just sling about 50cc of EP90 gear oil into the hub. This appears to mix with the shimano grease reasonably well, and ought to keep the hub from wearing too quickly, for a while, anyway.

by mjr
I did try mixing some of the wiped out factory lube and the Land Rover grease and it didn't do anything funny in a few days so I didn't worry whether I removed every last molecule of factory lube.

Of course, that may be why my left hand ring bearing failed!

by Roadster
I'd already dismissed ATF as a permanent substitute for Shimano WB but like the idea of using it as a temporary flushing oil to soften and dilute the old grease.

Thanks for that, Brucey - the more I think about it, the better I like the idea...

by rualexander
Opened up my Alfine 8 hub today after two years since I lubed it by soaking in ATF (automatic transmission fluid) and applying lithium grease around the bearings and races.
Seems to have held up pretty well over the two years, my use of it is fairly light though, probably 1000 miles or so in that time, but including salted roads in winter.
I'll give it another overnight soak in ATF and put it back together again. 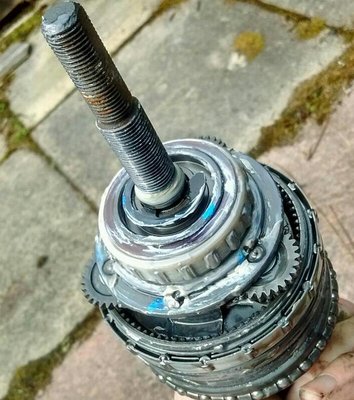 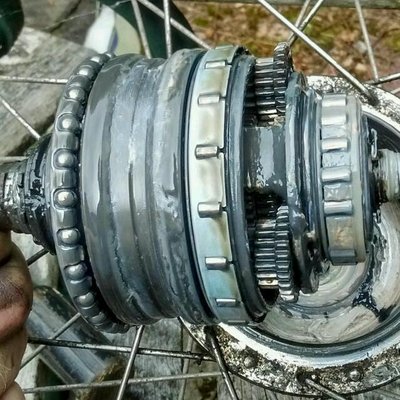 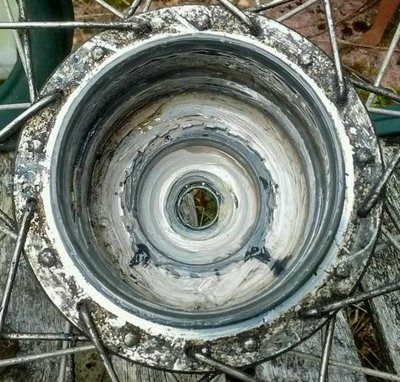 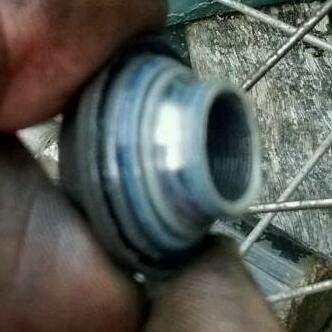