First venture into suspended bikes. I'm ignorant and Googling hasn't been successful because I don't know how to phrase the questions. Here's the situation:
1. Marin Rift Zone frame (c. '98), SID forks (80mm travel). My focus is on the rear suspension.
2. There are 3 points of movement, 2 where the rear shock is attached to the frame and swing arm and 1 where the swing arm pivots on the frame.
3. the pivot bearing (RW6-2RS-W25) feels OK but if it needs to be replaced, what do I ask for and are the assorted "bits" (axle, nuts and washers) specific to the frame or can you buy a whole new fitting kit?
4. the shock is a Marin coil-over, which may be OK but is heavy and 20 years old and thus might need replacing. I have measured some of what I guess are the relevant dimensions. These include:
- the length between the shock eyelets is 165mm and the stated wheel travel is 3.9" (I'm guessing from the little I have picked up that the "stroke"(?) I need is 38mm)
- the "hole" in the frame that the top of the shock attaches to is 15mm
- the shock eyelets are 15mm
- the plastic bushes (?) have an internal diameter of 11.6mm and an external diameter of 14.6mm. They fit into metal stepped "bits" which are 16mm diameter at the large section and 12mm at the smaller section and when fitted into the shock eyelet are 22mm long at the front, 35.5mm at the rear.
5. Replacing the shock seemed simple enough to start with - look for a 165x38 model (any suggestions welcome - occasional light trail use) but what about the fitting "bits? The Marin service instructions refer to
- on the front, a shaft-damper-static and a collar-damper mount (axle, bolts and washers?)
- on the rear (swing arm), a stud-damper-rear and aircraft nut self-locking M8
these fit through what I think are the bushings, but the Marin exploded diagram doesn't mention bushings.
6. When replacing a shock how do I specify what I want? Clearly the bushings have to be replaceable. I think are measured by length and internal diameter (M8/22 and M8/35.5?) but I've seen no reference to the external diameter i.e. where they fit into the shock eyelet (e.g. 15mm on the Rift Zone). Are bushings specific to particular shocks? Do I re-use the "fitting bits" (see 5 above)?
What are all these things actually called? What constitutes a "bushing"?
Sorry to be both rambling and obsessive and I hope this is the right place to ask the question rather than "MTB" section and I appreciate that the easy solution is to take it to the LBS. The point of it all is, however, to find out how the things work and fit together. Thanks for any help
Top

Can't be much help, I'm afraid, as I have never really used suspension, but perhaps this might be useful as vaguely relevant background reading http://www.parktool.com/blog/repair-help/ That's quite a useful site generally and their technical advice, when it relates to the problem in hand is considered sound.
The swinging arm bearing assembly would probably have been Marin parts specific to a few models. I doubt that anyone is selling generic replacements. If Marin can no longer supply these parts you don't have too many options. If dismantled I imagine you would be ok to reuse any bolts and washers, if sound, but it might be as well to renew any locknuts - but these are almost certain to be a standard thread.
If the shock mounting components are not shown in the drawing then it could be because they were only sold with a new shock, detail drawing in the box sort of thing.
With a bike of this age the availability of these types of parts may not be good. I would recommend researching carefully before spending too much
HTH
Trying to retain enough fitness to grow old disgracefully...
Top

Thanks Dave,
The game is as much about retro restoration as about riding. I've done a shedload (literally) of road and unsuspended MTBs - looking for a step beyond.
Gradually getting more info. I now understand the difference between the D.U.bushing and the reducer bush and can identify the right bushing, just need to find where to get some. The rest of the hardware looks OK but I'm thinking of future servicing.
Top

Have you checked or asked at http://www.retrobike.co.uk?
Top

the bushings are indeed called bushings. Some folk would call them 'shock eye bushings' but not everyone would use the same terminology. You might want to contact Marin's UK distributors about parts, IIRC they still use similar parts in more recent machines for bearings, bushings etc. so may be able to help with those. There are also specialist suspension rebuilders who might be able to help too. If push comes to shove a competent machinist would be able to make bushings.

(which is what I assume you might have) was intended as a more DH oriented machine than others in the range, and IIRC had a coilover shock, a stronger, heavier swingarm (in some years but not others), and came with a (then 'huge travel ') 100+mm travel fork. All tastefully colour matched, of course....

The Rift Zone got disc brakes a year or two later, and even more suspension travel, and then a different frame design too.

So anyway, the one thing it wouldn't normally have in it is a SID fork; that was meant as a lightweight air-sprung race fork, not a rufty-tufty fork to be fitted to the heaviest version of the Marin full suspension design.

Back in the day, Marin persuaded Paul Lasenby to ride a lightened Mount Vision in the UK XC race series (in 1996 I think) and he won, the first time for a full suspension machine. His bike weighed ~22lbs in race trim where a standard Mount Vison weighed something like 26-27lbs. IIRC the Rift Zone always weighed 30-35lbs (depending on the model); I think the rear shock/swingarm was heavier of course but most of the extra weight came in the parts fitted rather than the frame itself.

My suggestion would be to consider what you want to do with this frame and then act accordingly. You could

a) restore it using original parts,
b) turn it into an XC machine, or
c) tip the build more towards the longer travel side of things.

of these only b) would include retaining the SID fork; if you have a rim-braked Rift Zone then this has the least weight penalty vs other Marin models, and can be fitted with an air shock instead. 165mm is (was) a common length dimension for shocks around that time but they are mostly a lot longer than that these days.

It can be a lot of fun messing about with bikes like this; however, unless you get lucky, finding the right parts for machines of this age can be difficult/expensive. As others have suggested, retrobike is a good place to look.

Thanks for taking the trouble to read and reply Brucey.
It is similar to your picture but a much more tasteful black and polished alloy.
The bike is part "learning project" and part an "ease my ageing joints" solution. It is not going to get a lot of use and definitely not anything approaching "rufty-tufty". "XC" is nearest but really it's to deaden the impact of tracks built by Prussian farmers for their carts using big cobbles which have been lifted by the weather over the years.
It is my intention to try it out as it is before replacing anything. All the other parts will come from other bikes of the same era (except the FD which needs to be "top swing, bottom pull" because of the position of the swing arm). The bearings and bushings seem to be in good enough condition. I'm simply trying to be prepared to replace the parts that wear out most readily. I think the bits I'm particularly interested in are the DU bushings which fit into the shock eyelet. I can measure that the hole they fit into is 15mm and the diameter of the reducer that slots into the bushing is 12mm. I guess this means that the ID of the DU bushing is 12mm. The front ones are 6mm wide; the rear ones 8mm.
I'm still puzzled though - how is the size of DU bushings described? ID or OD? Width? And if I bought a new shock (and it won't be £500) how do I get it to fit? Some places seem to sell "mount kits" to match the frame and DU bushings to match the shock - am I getting warm?
Thanks again, and I will try retrobike.
John 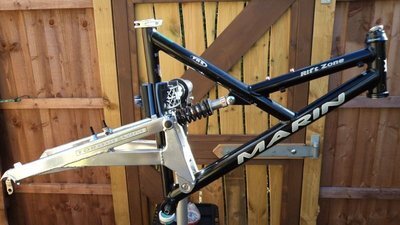 it'll be an interesting project, for sure.

You may find this interesting

One obvious difference is the shock, described as [ Fox Air Vanilla 35.5 / 22 ]. The numbers relate to the distance between the mount points in millimetres. i.e. 22mm wide on the frame : 35.5mm on the swing arm.

I have a diagram and parts list headed Marin FRS 1999, which includes the Rift Zone. ( If I had a scanner I would copy & send, or post up here/somewhere. )
Top
Post Reply
8 posts • Page 1 of 1