To lube or not to lube?

To lube or not to lube?

Well in the case of Shimano Hollowtech crank axle it's definitely 'not'.
It goes against the instincts a bit but the story is this:
I was given a bike for attention because the bottom bracket was 'loose'.
It had Shimano Tiagra cranks in apparently good order but they did have a bit of play when you pulled the crank ends alternately. Suspecting the BB cups were worn I took the cranks out. The left hand BB cup was seized solid which was surprising because the cranks had spun freely before. I inspected the axle and was amazed to see that, because it had been greased on assembly, it had been free to rotate within the failing, reluctant BB bearing. The loose feeling was because the nylon cup of the BB bearing had worn a step in the crank axle!

Get out there and check you have dry axles. If you don't you run the risk of forking out for a whole new crankset AND bottom bracket.

Thanks for that cautionary tale, Peetee - I'll certainly bear that in mind when my own Hollowtech BB requires attention. I've only had my first HT2 for a couple of years and so far it's been trouble-free, but it's obviously not going to remain so indefinitely. I must admit, I've been fully intending to grease the axle during reassembly when the time comes but will now think better of it.
Top

I stopped putting anti-seize on HTII splines when I had a crank arm start to walk off the end of the axle. strange thing was that the pre-load cap had undone at a similar rate and was undamaged??
clean splines and a re-torque after 50 miles for me from now on....
mark
Top

I suspect it might well have been OK had the bearing not started to nip up. It is unusual for the RH bearing to fail before the LH one; normally it is the other way round.

One thing that is worth mentioning is that the whole system is critically dependant on the clearance between the plastic sleeve and the spindle. There are several schools of thought here;

1) the fit ought to be so snug that assembly is usefully eased when lube is used
2) that no lube should be used
3) that using lube causes the plastic sleeve to swell slightly, and this makes the sleeve a snug fit on the spindle.

one thing is for sure; if the fit isn't good enough, (i.e. loose) it can quite quickly deteriorate. Were it not for the requirement to be able to adjust the bearing preload, I'd suggest that a (non permanent) bearing retaining compound might be a good thing to use during assembly if there is any doubt about the quality of the fit.

We know that the soft wears the hard, but may speculate whether the bearing's nylon cup would have worn a step in the axle even quicker had the latter not been greased...
Top

We know that the soft wears the hard, but may speculate whether the bearing's nylon cup would have worn a step in the axle even quicker had the latter not been greased...

It's possible, however an attentive owner would probably have noticed the additional friction caused by a binding bearing and a tight interface between axle and nylon bearing retainer. The problem with the greased axle wasn't noticed until the wear ridge was bad enough to feel the clunk of the axle moving off-centre on that side. Up to that point it was rotating quite freely - well, as freely as a hollowtech axle can, that is!

I think if you had the bike in the workstand, it might be quite clear that the BB bearings were not OK, binding etc. However normally a bearing like that will nip up when the bike isn't being used, e.g. because there is some water and corrosion in the bearing. If you just hop on the bike and ride it, it mightn't be obvious that anything is wrong, greased or not; the coefficient of dry friction between nylon and steel is also quite low. There is also the very real possibility that chain lube splashes would lubricate the joint whether you liked it or not.

I think we are going off at a tangent here. The point was to make people aware of that potentially costly scenario whereby you end up forking out for a whole new crankset rather than a BB at 1/4 of the price. The bike in question was given to me to investigate the clunk from the BB.
And here is a photo of the damage: 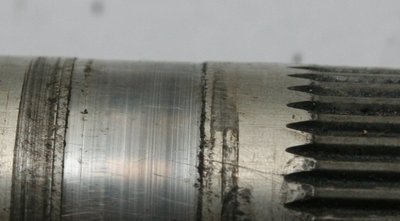 ah, so it was the LH bearing (as usual, and not as you originally described) after all.

I don't think anyone is disputing what kind of damage can be caused when these things go belly up. However it isn't 100% clear that whether the spindle was greased or not would have altered the outcome.

By contrast had there been a decent amount of decent grease in the bearings, things might have been very different.

On an entirely impertinent note, does anyone think that anything other than the old "cup and cone" (style bottom bracket, using 1/4" balls and allowing some measure of proper bearing adjustment is just bad design? I am persevering with one such cup and cone design: a Suntour Superbe which came with a bike I bought second hand a decade ago. At that time it was so badly adjusted that I could not turn the spindle with my fingers. I imagined it was thus damaged - yet a decade (only about 10,000 miles on this) it is still perfect and a joy to clean and rebuild. Adjusting such things takes a little patience, I suppose, but it seems to me vastly superior in every way to modern equivalents. And let's not get started on Ultra-Torque - what the hell were Vicenza thinking?
Top

I have a few of them sat in drawers that came off my various bikes, including a high quality Campagnolo one. I dont see them ever getting fitted because I am too lazy to voluntarily commit to the extra maintenance required.
It is a bit "throw away society" but my EBB set up has done 16,000 miles and is still on its second set of cups, the first set are ready to go back into service after having one narrow 6805RS bearing replaced (I have about 20 of them stockpiled as they cost £2 each in a sale at CRC).
The second set was a Tiagra costing £8 and is up to 8,500 miles with no detectable issues.

I am pretty sure that a cup and cone would last longer and would only need a new set of balls if the same sort of neglect befell it that happened to my first EBB set.
Yma o Hyd
Top

The trick with old adjustable cup bb's was to thread in the adjustable cup just a bit too far. When you tighten up the lock ring it effectively pulls out the cup a small amount which, if you have judged it right, gives perfect adjustment. It's a fine one to judge as the quality of the bb and cup threads have some say in the matter.
Same with lock nuts on a hub axle - if they both move equally freely on the axle, that is.
Current status report:
Back on two wheels in deepest Pastyland and loving every minute. Mission: to enjoy big, bad hills again.
Top

However it isn't 100% clear that whether the spindle was greased or not would have altered the outcome.

No, but in a lot of cases a dry axle would have caused enough bind that owners could have suspected something wasn't right.
With a greased axle the whole assembly rotates freely and the first time you suspect things are not right is when play develops because the axle has been worn away.
Current status report:
Back on two wheels in deepest Pastyland and loving every minute. Mission: to enjoy big, bad hills again.
Top

Anyone like to comment as to whether this nasty mess was caused by the same problem? The owner is not a powerful rider and the BB bearings were badly corroded and reluctant to move. 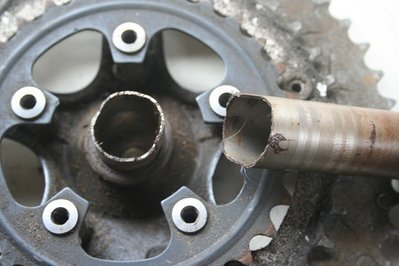 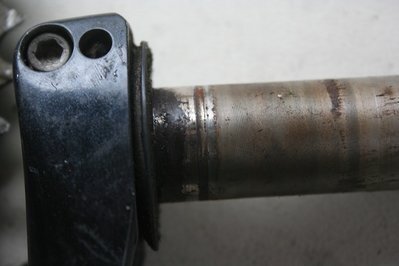