there is perhaps some value in running the wheel, in that there might be a difference in the rattle under load vs when freewheeling. Otherwise just bouncing the wheel up and down might tell you enough...?

Another diagnostic idea is to paint #25 and confirm that, in use (or when the wheel is just bounced), the paint is removed in the places where you expect.

I'd probably do both these things before starting to grind stuff inside the hub.

Also, I have mentioned this before but this SA hub is different from every other three speed in that the internal clearance is not adjustable in the usual way. Normally you do up the RH cone then back it off half a turn and this sets the internal clearance. In CS-RF3 this cannot be done. In the examples of this hub I have seen the 'set clearance' is kind of generous; this means that #7 is (particularly when unloaded) not well located and can move more than it should (IMHO) be able to. This may be adding to the rattle especially when #7 is unloaded (i.e. when freewheeling). However to reduce this clearance requires machining parts. I have done this on a trial basis (on a spare internal I have) but I have not run it to verify that it makes any difference or not.

I can build up the whole hub - not putting it in the wheel - and pull the toggle to the yellow mark and see if it rattles.
I've a feeling I've done that in the past, and found nothing, and that is why I thought it was a pawl issue rattling in the shell.

I'll still do it though. It's all clean and dry so will be in it's rattliest state.

Back later with findings, if any.
Mick F. Cornwall
Top

Put the hub together and left it in 3rd gear. No rattles.

Then, I pulled out the toggle to yellow mark 2nd gear and inserted a pin to hold it. Yes, I asked permission to use a pin from SWMBO.

Then, I tried to see what was loose.

The insides were quiet, but it was No4 sun and planet unit as well as No7 were as loose and rattly as you can imagine.
In 1st gear position, they were still loose, but not so much.

Culprits when freewheeling in 2nd gear:
No4 poor fit on the shaft and wobbles.
No7 idle and doing nothing, and wobbles plus goes back and forth. 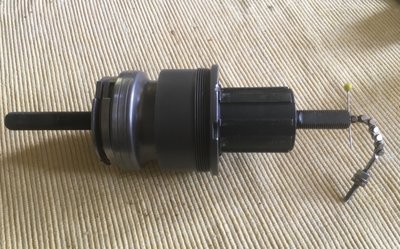 Edit to add .......
If you look closely at No7, you'll see that the sides are polished in places, but not all round. Maybe that's due to rubbing on the hub shell.
Yet to clean out the shell, so it could tell a tale.
Mick F. Cornwall
Top

Mick F wrote:If you look closely at No7, you'll see that the sides are polished in places, but not all round. Maybe that's due to rubbing on the hub shell. 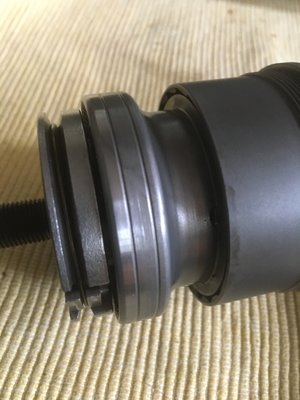 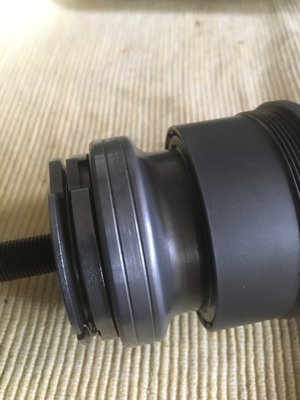 Yep.
I'm correct.
No7 is rattling and catching on the inner of the shell.
Cleaned the shell out and saw the scoring.

Left the pin in the chain for 2nd gear, fitted the innards and the LH bearings and cone.
All nice and hand tight, and dropped and bounced the wheel on the concrete outside.
The recognisable rattle was loud and clear.

Photo to show the scoring. It's all the way round. 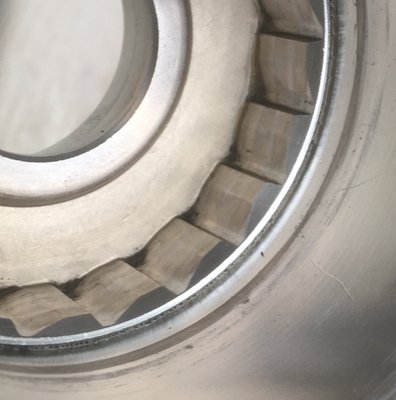 so refresh my memory, it is only ever noisy when freewheeling in second gear? Not when under load, is that right?

Freewheeling.
Under load, it's fine.
This can be on the same road going down the slope freewheeling, or pedalling under load in the opposite direction.

It's not speed dependent. Rattles fast or slow, so long as the surface is right for it.
Smooth tarmac is fine, until you hit a bump/manhole cover/drain etc when it knocks ......... but only when freewheeling.

Only in 2nd gear, though 1st is a bit rattly but ignorable.
3rd is always quiet.
Mick F. Cornwall
Top

PS:
Just been reading Page 1 of this thread.
It seems that the hub has "run in" now and some of the noises I complained about have gone.

if #7 were moving around and making the noise then surely it ought to make noise in 3rd gear too? That it is noisy freewheeling in second gear and a bit in first still makes me think it is #25 hitting #7 on the inside. However this may be mainly because #7 is moving around rather than #25 is moving around.

The only differences between first and second is that in first gear #25 is pushing (not hard) on the back of the high gear drive pawls, and #25 is further engaged with #13. The pressure of the pawl springs should suppress rattling between #25 and #7 slightly.

In third gear #25 is engaged with #4, and presumably the two parts cannot move in quite the same way. However this wouldn't make a difference to the noise unless #4 and #7 are normally striking one another and somehow this is altered by the engagement between #4 and #25....?

on a more fundamental point #7 will ring like a bell if it is struck and it is momentarily not in contact with anything else. Hence I think that is certainly where the noise is coming from; you recognised the sound immediately. The question remains as to exactly what is causing it and whether or not it can be cured at source.

However it might be that the noise can be suppressed to some extent by simply applying a damping element to #7.

For example fitting an (oil resistant) rubber ring into the groove in the outside of #7 might do it? Worth a try? You can assess the effect by simply striking #7 with and without it fitted...?

Sorry, been out in the garden having a picnic socially distancing with daughter and grandson for the afternoon.

In 3rd gear, No25 is hard up against No4 and that holds it steady so No7 is steady too. All feels like it's in one piece like that.
In 2nd gear, No25 is lifted and in limbo and No4 and No7 are a bit wobbly.
By the time you're in 1st gear, things are held a bit steady by dint of No25 holding No7 by its pawls.

The idea of some sort of insulation ring around No7 has already occurred to me, though I don't know what I could use.
I have thought about sticking something to the inside of the shell instead, but whatever was used on No7 or the shell, would wear over time.

You said that the grease would come out of the ring gear .......... the inner bearing on No13, but in my experience of this, it comes out on the RH outer bearing of No13 where there is no seal whatsoever ........... not even a labyrinth seal. You can even just about see the bare balls when you look in.

The ring gear has a nice plastic race with the balls, and it makes a reasonable seal on the ball ring, but the outer RH bearings have no sealing whatsoever, and that's where the excess grease comes out.
Mick F. Cornwall
Top

PS:
Sorry, I've a few of these post scripts!

What I haven't done, is insert No7 minus its springs and pawls into the hub shell to see what the clearance is. Maybe a measurement or two would suffice instead.

The clearance can't be much.
Mick F. Cornwall
Top

Mick F wrote:What I haven't done, is insert No7 minus its springs and pawls into the hub shell to see what the clearance is. Maybe a measurement or two would suffice instead.

The clearance can't be much.

A quick measurement with digital callipers.
I stress a quick measurement, but I reckon it's about right.
Round figures coz I can't be bothered to be more accurate - had a long afternoon running round the garden with a young grandson and a young border collie.

This means that there's a 0.6mm diameter difference, which therefore means there's only 0.3mm clearance between No7 and the shell.
Even if I'm not spot on, it illustrates the lack of room in there and how a loose No7 can hit and tap as the whole thing goes round.
Mick F. Cornwall
Top

if so there ought to be corresponding rub marks inside the hubshell…?

BTW a simple way of checking the clearance directly is to offer #7 up to the hubshell and then use wires of known gauges to assess the clearance on the diameter directly.

FWIW if you don't have anything suitable, you may be able to hammer lengths of old spoke flat to make 'gauges'.

This method is inherently more accurate because there is in essence only one measurement to worry about, and that is the thickness of the gauge pieces. Subtracting one measurement from another results in double the error and bore measurements using verniers are most susceptible to error because the 'zero' cannot usually be verified. However all this is arguably moot; it is unlikely that you would have as much as a 0.5mm error and something of this sort would be required if there were a decent clearance.

NB if #7 is hitting the hubshell and making the noise, it should rattle just as badly as in second gear if you remove #25....?

Brucey wrote:if so there ought to be corresponding rub marks inside the hubshell…?

See my photo above.
Yes, there are rub marks plainly visible.

NB if #7 is hitting the hubshell and making the noise, it should rattle just as badly as in second gear if you remove #25....?

I could remove No25 etc and do the bounce test again if you'd like, but that won't be until tomorrow sometime.
Rebuilding the hub so it's rideable with No25 etc removed is pointless IMO because I know the culprit ......... No7 bashing against the hub shell freewheeling in 2nd gear.
Mick F. Cornwall
Top
Post Reply
226 posts