Hub going back together shortly and shoving in some of the Landrover swivel hub grease.
All the bits are nice and clean at the moment and sitting on the coffee table!

Took a couple of photos of before the shim and after the shim.
Difficult to capture it just holding it in one hand and using an iPhone camera in the other.
You'll get the idea of the difference, I'm sure.

I put the two together.

Before on the left, and after on the right. 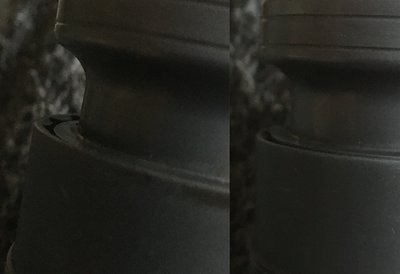 All in, lubed, cassette on, fitted to the bike, toggle connected, and it all goes round.
Ready now for a test ride tomorrow morning.

Still painting the walls outside (and come in for a cuppa) then shopping to do late this afternoon, so a bike ride has to wait.

Sort of concerned that the plastic shim won't last. I could make a dozen of them from the cat collar, and we have another one too to use, but something more wear-resistant would be better.

I'm on the hunt for some metal of 0.5mm thick, though if this hub still rattles in 2nd gear freewheeling, it may have to be 0.525mm

Mick F wrote:Brucey has suggested on other threads about these hubs, to use Landrover swivel hub grease.
To this end, I've been on eBay an ordered a pair of these. Should be here later in the week.
https://www.ebay.co.uk/itm/LAND-ROVER-D ... 2749.l2649

I'm going to strip down the hub and wash it out clean, then check it all and reassemble with a good dollop of the LR grease.

How much of the LR grease do I use?

As I've said, it's all back together and lubed up.
I reckon I put a little more than an egg-cup of grease in there. The sachets are quite big and the eBay listing says 375g each. I may get round to weighing the unopened sachet on the kitchen scales then weigh the one I've started on to assess how much I've used for future reference.

I cut open the end and squeezed out some into a small tin, and used that and a finger to drizzle lube over all the parts as I assembled the unit. I also coated the inside of the hub shell and the LH bearing.

After getting it in and the ball-ring tight, I removed the cassette carrier and squeezed another dollop into the innards, then replaced the carrier and adjusted the LH bearing and locked it all up. Wheel now back on the bike.

The grease seems lovely and smooth. Dark blue - very dark blue - "clingy" and "drizzly" and soft. Very nice stuff indeed and I have enough to last me the rest of my life!

Mick F wrote:The sachets are quite big and the eBay listing says 375g each. I may get round to weighing the unopened sachet on the kitchen scales then weigh the one I've started on to assess how much I've used for future reference.

This means I get 20 re-lubrications out of each sachet.
Mick F. Cornwall
Top

Ultra High Molecular Weight Polyethylene (UHMWPE or just UHMW) aka Helicopter Tape is highly wear-resistant and is sometimes used on chain stays to protect from chain rub. Wondering if that would be appropriate.
Top

No mention of Helicopter Tape though.
Can you get it in 0.5mm thickness?
Mick F. Cornwall
Top

Can't you buy some proper shim washers?
One example, but there are loads of suppliers available:
http://www.modelfixings.co.uk/shim_washers.htm
Top

Maybe I spoke too soon: I have a roll of UHMW tape from years ago, but only 1/2" wide, and it's real sticky. I don't know what's available in the UK or Europe, but Stateside there's:
https://www.mcmaster.com/uhmw-polyethylene-tape/
Ridiculous prices in the larger sizes, though.
FWIW Helicopter Tape is called thus because it's used to protect the edges of helicopter (REAL helicopter) rotors.
Top

Thanks for that Ditty.
Food for thought.

Off out on a test ride shortly.
I've worked out a 20mile route with plenty of freewheeling opportunities on not-so-smooth roads.
The weather is iffy so I may cut the distance somewhat.

Do you know?
I'm quite nervous about this test ride.

Will it work?
Am I wasting my time and brain-effort?
Will I be made to look a fool or a hero?

Brucey wrote:...When reassembling, it is important to set the internal clearances in the hub. This is usually (NB there may be a variation to the method for this hub) done by tightening the RH cone finger tight (with the LH one backed out), then slackening the RH cone 1/2 turn before locking it with the locknut. The set the LH cone. Older SA hubs had a locking washer with tabs on to captivate the RH cone; I advise that (if possible) you fit this part to any new hub that lacks it, since occasionally the locknut doesn't do its job, which can destroy the hub. One of the symptoms is the 'noisy freewheeling in top gear' effect as described in the following para...

Did you decide whether there is a variation in how this hub is set up? There is no locking tab washer on the RHS as per the AW and I don't think there's room for one.
Top

I think you are just meant to screw the RH cone up until it stops. The internal clearances are then set by the way the parts are made. If this happens to be 'badly' then you can end up with a rattly hub....?

fausto99 wrote:Did you decide whether there is a variation in how this hub is set up? There is no locking tab washer on the RHS as per the AW and I don't think there's room for one.

Brucey wrote:I think you are just meant to screw the RH cone up until it stops. The internal clearances are then set by the way the parts are made. If this happens to be 'badly' then you can end up with a rattly hub....?

Yes, the RH cone is done up TIGHT against the stop on the axle. There is zero adjustment to anything other than the main axle LH cup and cone bearing.

Best way is to mount the wheel horizontally in a vice LH side down and make sure the RH cone is TIGHT.
Then, invert the wheel and adjust and lock off the LH end.

Talking of the LH end, my hub came with two hex locknuts making the hub 135mm OLN. Take one nut off, and hey presto, the hub is 130mm OLN.

Test ride complete, with a shower of rain at the end. 15miles done.

Quite good news is that it's FAR less rattly freewheeling in 2nd than it was, so I'm on the right track. Had it always been like this, I'd have just said, "It's a bit jiggly" and shrugged my shoulders at it, but because I can still hear it after all this angst, I want to improve on it.

No bad news at all other than I'll have to pull it apart again to have another think.
I may try and fit the thicker shim in there as the hub is nicely lubed up. When I tried it before, it was all clean and dry and felt a bit stiff.

Experimentation time in the workshop later!

Tightened everything up, adjusted the LH bearing, and it was stiff. It went round ok but was stiff. Perhaps it could run in?

I reverted to the 0.5mm shim, put more Landrover grease in - I guess another 10g making the total 28g or thereabouts - could check the relative weights of what's left against the unused sachet I suppose - and put it all back together again, adjusted, and refitted to the bike.

Test ride No2 tomorrow.
I expect it to be a tad quieter coz I've shoved more grease in there. The trick is to get sufficient in there but not enough to overflow.

Excellent post Mick - have been following for a while. Have you considered using aluminium from a drinks can as a shim, easy to cut and thickness is circa 0.1mm so you could fine-tune a bit?
I appreciate your assessment re the suitability of LR swivel grease as this sounds perfect for my 3-speed Brom hub instead of the overpriced SA fudge!
Top
Post Reply
226 posts