The idea of fine tuning only came to me over breakfast this morning.
In the recycling bin in the kitchen we have some foil trays left over from something or other. I cut a bit out and measured it = 0.08mm.

It I cut another shim out, or maybe two or three, I could well be onto a winner.

The rain seems to have abated for now, so I'll be nipping out for another test ride. Won't be far, just an assessment to see if it's better with more grease. I doubt the hub will ever be perfect, but another thin shim or two wouldn't be a bad idea.

I'll see how it gets on this morning first.
Mick F. Cornwall
Top

Fundamentally I suspect that you will struggle to fully suppress radial movement of the ring gear by controlling lateral clearances, and that if you do succeed it may be at cost of increasing drag in the hub whenever the ring gear is turning at a different speed from the hubshell (some freewheeling, all pedalling in gear 1 and gear 3).

But having said that, any experiment is interesting, so why not....?

Back from - an only four - mile test ride. Short coz it's blowing a gale and it's raining, but a worthwhile test nonetheless.

The only difference between today and yesterday, is that I put a little bit more grease in there, but it was noticeably quieter ........ though not silent. It still feels smoother and I get the impression that this Landrover grease is much better than the 50/50 gear oil and moly CV grease.

I agree, Brucey, I can't eliminate radial play by fixing the lateral play.
I wonder if I have cured the lateral issue and all I'm hearing now is radial, and that adding grease quietens the radial rattles.

I'm going to give up with any more ideas of shims for now, and I'll add some more grease later today ready for the next test ride.
Mick F. Cornwall
Top

Comparing the weight of the unopened sachet and the used one, I've put in 45g.
No real idea what volume that is, but if it was the same weight as water, it would have been 45cc of course ......... or 1.6 fl oz.
Mick F. Cornwall
Top

45cc of grease. Yet to have a test ride with that much in there.

What is the total volume of the hub?
Diameter is 67mm for the spoke holes and width across the flanges is 56.6mm.

Just say those dimensions form a cylinder.
Makes the (empty) volume about 120cc so my grease forms 37% of the total volume.

How much volume is taken up by the mechanicals?
Mick F. Cornwall
Top

I don't intend taking it out again for a while, so the idea has to remain in theory only for now.

Off on another test ride soon. I may get soaking wet (again).
It'll be interesting to see if any grease, escapes let alone how the 2nd gear sounds.
Mick F. Cornwall
Top

Fairly quiet in 2nd gear freewheeling and a tiny bit better than yesterday. If it stays like that, I'll be a happy bunny.

15miles done, and at about half way, I stopped and looked to see if any grease was escaping. All looked clean and dry.
I came back to the village down the lanes and the rear brake started squealing. This was less than a mile from home.
I stopped and looked, and yes, the grease was leaching along a few spokes onto the rim.

I'll obviously clean it up, but I'm in two minds what to do.
1. Just leave well alone and keep mopping up the escaped grease until it stops.
2. Take some out.
Mick F. Cornwall
Top

If you go with 1) you could temporarily install a ring of blotting paper in the spokes, to soak up the excess.

One of the downsides of the LR SFG is that it makes a terrible mess; if any gets on clothing, that clothing is more or less stained for ever.

Brucey wrote:
One of the downsides of the LR SFG is that it makes a terrible mess; if any gets on clothing, that clothing is more or less stained for ever.

When Mick F refered to it as 'Landrover swivel hub grease' you just KNOW that it will make a right mess of everything....

Brucey wrote:If you go with 1) you could temporarily install a ring of blotting paper in the spokes, to soak up the excess.

What a good idea!

I'll get my thinking cap on over the weekend and see what I can lace in there.

Brucey wrote: One of the downsides of the LR SFG is that it makes a terrible mess; if any gets on clothing, that clothing is more or less stained for ever.

Tiberius wrote:When Mick F refered to it as 'Landrover swivel hub grease' you just KNOW that it will make a right mess of everything....

It came off my finger ok when I stopped to check it out. Good job it was only a finger.
I've been using latex gloves when handling the stuff and I have a collection of old tea towels and bits of old sheet that I use for wiping down things.

I took the wheel off (with gloves) and cleaned it up. I don't think much came out, but as it's mucky stuff it seemed much more than it actually was.

Until I used the Landrover grease, I'd been using a 50/50 mixture of moly grease and Hypoy90, and when there was too much of that in there, it came out of all three orifices. LH bearing, ball-ring bearing and outer RH bearing. It coated the whole transmission and derailleurs as well and was a pig to clean it all up.

This time, it had leached out of the ball-ring behind the cassette, but as I said, not much at all ......... but enough to travel along a couple or three spokes to contaminate the rear brake.

I cut down leakage with a ring of ptfe tape around the ball ring before reassembly.

The ball ring is tight in the hub, and tightens even more in use.
The leak is through the bearing seal.

The bearing is a dozen(?) balls in a plastic race. The plastic is shaped so the outer edges are a good fit on the cassette carrier and the ball ring.

This sort of rings true to what happened today.
For the most part, my ride was uphill and flat, but it wasn't until dropping down into the valley that any would have leaked out.

It was a mile and a half of downhill, some of it steep to the traffic lights in the village. It wasn't until I was half way down that the rear brake became contaminated. I know this because I'd been braking heavily before that.

This is all downhill. 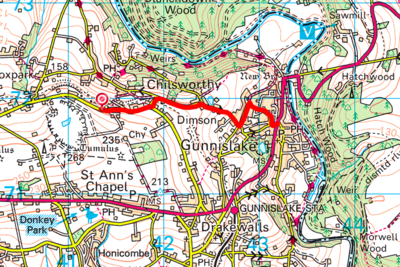 Just come in from walking the doggie.

Look what I found on the road!
Recognised the size and shape of it straight away.

I had to bring it home to check on the size even though it is rubber and a tad too thick. 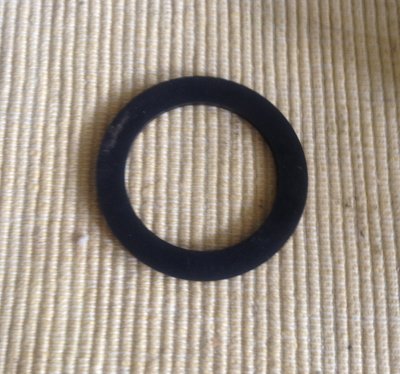 Here is is again next to my cardboard prototype. 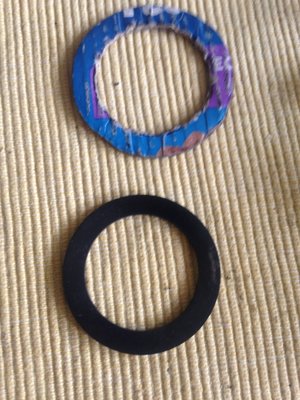 Just come back from a curtailed ride.

Nowt wrong, just the sudden cloudburst!
I'd made it out of the valley onto the top of the Devon bank, hid under some trees to put my Goretex on, then turned round and headed back down the long hill.

Knowing that if any grease was going to come out, it would be whilst freewheeling, so the mile or so back down would have been a good test. The rain was stinging my face at 20odd mph.

Reasonable test, but it would be better on a longer ride with a few downhill freewheelings. My fingers are crossed for better weather as well as not having leaking grease.
Mick F. Cornwall
Top
Post Reply
226 posts