For discussions about bikes and equipment.
Post Reply
83 posts

Completely ignoring it, i would say .

cleat position got a mention, though.

531colin wrote:...
Well, in a moment of weakness i put my saddle up 4cm.
I'm so glad I did......its the biggest laugh I've had for days.....I never got past the end of the road....no surprise, really, as i couldn't get the pedals all the way round.....its like being 8 years old again, trying to ride my big brother's bike.
You are having a laugh, aren't you? I do hope so, because i still am!

So with an inseam of 82cm you cannot get to the pedals if the saddle is set at 75cm?
What crank length do you have, and are you sure you are not dropping the heel? It sounds to me like you are, and I may be dropping the toe, that would explain such big difference ins saddle height between two people with the same inseam.

Samuel D wrote:The toe-versus-heel dropping differences would have to be large to explain the differences between the four of us.

531colin uses SPD shoes, which may have a lower stack height than road pedals.

Gattonero: did you actually measure your inseam? You ‘sat’ on a hardback book pushed gently into your crotch and square against a wall, while wearing only underwear, feet about pedal-width apart?

My guess is that toe-versus-heel dropping is at least as much a response to saddle height as it is a natural pedalling style. That is, if you raise the saddle, you’re going to point your toes whether you like it or not. And vice versa to a lesser extent (lesser because pedalling with excessive knee-bend is possible).

Whether it feels normal will depend on how long you’ve ridden like that. I’m not sure feeling normal is a good guide here. Merckx used to fiddle endlessly with his saddle height as if tiny differences mattered. I suspect they only mattered in his head.

Pointing the toes must require less force from the calf muscles, thereby saving some energy. That and the aerodynamics argument are probably why some pros point their toes. But there are counter-examples: Froome, Wiggins, and Merckx rode with low saddles and relatively low heels. Anquetil, on the other hand, rode with an extreme toe-pointing style.

I do use SPD shoes.
Steve Hogg would agree with you that toe dipping can be a response to a too-high saddle, rather than a natural thing. If the saddle is too low, I see people riding with an exaggerated bend in the knee.
The act of pointing the toes requires the calf muscles to contract, so it probably needs more energy than simply holding the foot level.
What I can't get my head round is that people tell me (correctly) that you get maximum force for minimum muscle work when your knee is nearly straight....so at the very point where they get maximum force, they are extending their ankle down in order to reach the pedal. Much more efficient to put the force on the pedal with the foot flat.
Bike fitting D.I.Y. .....http://wheel-easy.org.uk/wp-content/uploads/bike-set-up-2017a.pdf
Tracks in the Dales etc...http://www.flickr.com/photos/52358536@N06/collections/
Top

Should we rename this thread?

don't get too excited; if you attach these to a bicycle it will suddenly weigh double and you may find that the tube diameters are 'not quite compatible' with standard fittings....

I suggest " Yet another innocuous thread derailed by the usual suspects"

Back on topic with my fixed gear Moulton TSR. Using a Travel Agent so I can use the reverse brake lever with a V brake.


don't get too excited; if you attach these to a bicycle it will suddenly weigh double and you may find that the tube diameters are 'not quite compatible' with standard fittings....

Careful chaps or we will be on cowhorns next.

AM7 wrote:Back on topic with with my fixed gear Moulton TSR. Using a Travel Agent so I can use the reverse brake lever with A V brake.
...

As regards Merckx , yes he adjusted his position many times and most of that was due to the serious crash he was involved in behind a derny, driver died, afaik his pelvis was twisted and it was never quite right afterwards, sacroiliac issues and he admitted he never had the same power after that smash..will
Top

I'm not going to apologise for continuing to discuss riding position......what is handlebar shape about, if it isn't about riding position?
I think Samuel has shown us where this 0.88 magic number originates....

Samuel D wrote:..............
The 0.883 × inseam method was popularised in Lemond’s book but first put forward by Lemond’s coach, Cyrille Guimard. However, this is what Lemond’s book actually says about it (I have it in front of me):

Previously I was measuring my saddle height from BB axle to saddle top along the seat tube, and the result was 70cm.
However, if I measure from BB axle to about the middle of the dent my bum bones make in my saddle, my saddle height is then 72.5mm......which is fairly close to the 74cm which the Lemond method seems to suggest.
So, where has the missing 15mm gone?
My bullbar grips replicate this "hoods" position... 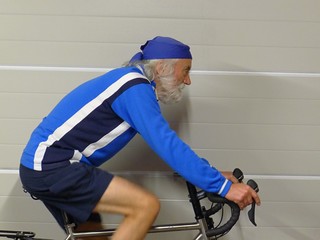 when I had drops, with the "tops" level with the saddle, this was my "drops" position... 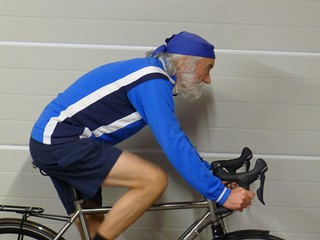 Thats certainly not an extreme position by to-day's standards, but my pelvis is rotated further forward when I'm on the drops than it is when I'm on the hoods. If I had a significant saddle to bar drop, then my torso would be closer to horizontal and my pelvis would be rotated more, but my hip flexion would be extreme (belly interfering with thighs), and i would need to put the saddle forward to reduce hip flexion, and up to compensate for moving it forwards. I would also need a longer reach.
You can see here https://commons.wikimedia.org/wiki/File:Pelvis_(male)_02_-_lateral_view.png that my hip joint moves forward and down as I rotate my pelvis forward, which increases effective leg length. Moving the saddle forward makes it more likely that I would ride toe down ....you can think of the body "rotating around the pedal spindle".
So if i put the bars down and forward, the saddle forward and up, and i rode with my pelvis rotated forward, my toes down and my cleats forward, its possible that i could actually find my missing 15mm saddle height and ride with a 74cm saddle height as per Lemond. However, this is an aerodynamic racing position suited to an athlete (originally a Tour de France winning athlete).....it requires good biomechanics and functionality, as well as flexibility and core strength.
It seems to me that modern fashionable road bikes with steep seat tube angles and pronounced saddle to bar drop force the rider to attempt to adopt a riding position as described by Lemond.
The average person who spends 35 hours a week sat at a desk isn't going to be comfortable in this sort of position unless they devote a considerable amount of time and energy to developing flexibility, functionality and core strength (like a professional athlete).
I have never read "Lemond's book" but I would be interested in what it has to say about riding position in general......I don't think its wise to just pick out a part of the whole position and make it a universal recommendation, to anybody who just wants to go for a nice bike ride in the country.
Bike fitting D.I.Y. .....http://wheel-easy.org.uk/wp-content/uploads/bike-set-up-2017a.pdf
Tracks in the Dales etc...http://www.flickr.com/photos/52358536@N06/collections/
Top

it is as well to remember that, back then, Lemond was almost certainly also talking about a riding position that included the then fashionable 'LOOK' pedals. IIRC these have a considerable thickness (i.e. ball of foot to pedal spindle centre) vs some other pedals, plus the distance will vary with the thickness of the shoe sole in use. I think you could easily get a 1cm variation in saddle height using different pedals and shoes.

531colin wrote:I have never read "Lemond's book" but I would be interested in what it has to say about riding position in general.

To clarify, the book I have is Greg Lemond’s Complete Book of Bicycling, second Perigee edition, 1990. I got mine on AbeBooks (where I also got Vivian Grisogono’s Sports Injuries: A Self-Help Guide on your recommendation. She knows her stuff and explains it well).

Lemond’s fit advice in the book boils down to a series of formulas, variously attributed to Guimard and Hüggi (more below). He goes into saddle position deeply. The rest is mostly the usual hand-waving with vague talk about responsiveness, “benefit better from the momentum my bike creates" (p. 140), etc. Nothing worth buying the book for. Lemond was a slightly better racer than you, but I’m sure you’ve spent ten times longer thinking critically about bike fit.

For interest, Lemond gives his own inseam (84.3 cm) and saddle height (74.4 cm from centre of bottom bracket to “top of the cupped part of the saddle”).

A few titbits from the book:

I’m glad I have the book, but I don’t treat the fit recommendations as gospel. They contradict other sources including, as Lemond admits on p. 130, then-director of the US national cycling team Eddie Borysewicz.

Brucey wrote:it is as well to remember that, back then, Lemond was almost certainly also talking about a riding position that included the then fashionable 'LOOK' pedals.

No: “Remember that this overall height formula was determined with the standard Campagnolo racing pedals and standard, medium-thickness cycling shoes such as Brancale, or Sidi nylon mesh shoes.”

However, he later concedes: “Remember, when you’re within a centimeter of your correct correct overall height measurement, you’ll be fine.”
Top

Brucey wrote:it is as well to remember that, back then, Lemond was almost certainly also talking about a riding position that included the then fashionable 'LOOK' pedals.

No: “Remember that this overall height formula was determined with the standard Campagnolo racing pedals and standard, medium-thickness cycling shoes such as Brancale, or Sidi nylon mesh shoes.”


also similarly tall, IIRC (by comparison with many modern pedal/shoe combinations); Lemond was certainly riding LOOK when he won the TdeF (and I think carried on doing so for the rest of his professional career...?) and he would hardly have bothered recording his saddle height etc without an allowance for this had it caused any variation.

IIRC Hinault & Genzling's book was the first publication of the system that was (in essence) what Lemond is on about.

FWIW the exact shape of the saddle (and where you happen to sit on it) can make a big difference to some of the setup variables. Similarly any discussion of seat angles is predicated on what type of saddle and seat pin you use. With the kind of kit used in the 1980s, it arguably makes sense if you have a frame/seat angle that allows the saddle to be almost as far back on the rails as possible when you are sitting correctly; this allows the saddle rails to flex as much as they can do which improves comfort.