For discussions about bikes and equipment.
Post Reply
111 posts

If we have a summer .............. my feet will boil again like they have done in the past.
I used to have black Sidi road shoes, and they were terrible in the hot weather, and then I bought a pair of brown leather Dromarti road shoes. These are better, but my feet still overheat.

Now I'm riding a Moulton, I've fitted Speedplay Frog pedals and now use SPD recessed cleats, so my thoughts are turning to sandals instead of shoes for the summer.

Googling brings up Shimano of course.
SD5 look good.
http://www.wiggle.co.uk/shimano-sd5-sandals/
Rather expensive, and only in black.

I like a real sandal, and the Shimano SD66 isn't real enough, in fact boring.
http://www.wiggle.co.uk/shimano-sd66-spd-sandals/

What I want, is a reasonably priced sandal in a colour other than black and very similar to the Shimano SD5.

Is there anything out there?
Mick F. Cornwall
Top

Mick F wrote:
I like a real sandal, and the Shimano SD66 isn't real enough, in fact boring.
http://www.wiggle.co.uk/shimano-sd66-spd-sandals/

What sort of exciting are you looking for in a sandal?

What sort of sandlal debauchery am I missing out on?
Sweep
Top

I wear sandals instead of shoes most of the year. Maybe March to October.
In the house, I'm in bare feet.

I like sandals. Real sandals. Not shoes with slots cut out.
How about these, but cycle SPD specific? 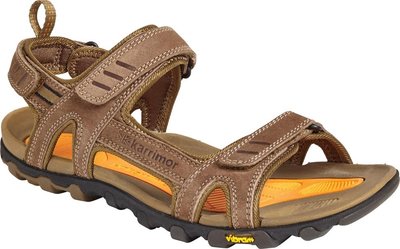 I have a couple of pairs of these;

Great for Kayaking and ideal for cycling with pedals and toe clips.
One of my Triban 500's has been fitted out with pedals to suit.
But ...
Their not really sandals, even though the heel section folds flat ...
I admit their trainers with holes in them ...
I just like my toes to have a little cover ...
Be More Mike.
The Road Goes On Forever
Top

I always worry about open toe sandals on bikes...thought of tender little piggies scraping along the road . I konw loads of people ride in saddles or bear footed in the develpong world, but they dont tend to go that fast, plus their feet are somewhat more harded than ours. Am i being overly cautious?
BNB Community Cycling
Top

Sandals seem to be aimed at the off-road market and the MTB brigade.

Maybe I should bite the bullet and buy the SD5 from Wiggle.
Mick F. Cornwall
Top

I think you'll have to accept the black Shimano SD5.

SPD sandals have always been uncommon, with only 3-5 different models available at any one time, even allowing for change-over periods when the old version (eg Shimano SD66) and new version (Shimano SD5) are both available.
I think that the Shimano sandals were available in brown maybe 3 versions ago, and the previous version of the Exustar (SS502) came in pale grey (still available from Bike Nashbar in the US as the Ragster II, but in black).
Other than Shimano and Exustar, I only know of the Keen Commuter. That is grey rather than black, but it's the shoe-with-holes style of sandal, so I doubt it's any good.

I've been cycling mostly in SPD sandals for the last 5 or 6 years or so. The general rule is that if you aren't wearing long fingered gloves, you don't need socks. In my case, that's down to about 5°C, so I've been using them on and off all winter.
In terms of protection, I've not had any problem other than the occasional nettle sting.

These are the forerunner, I have several pairs, they have an unique insole with bobbles which make them very comfortable.
A bit cheap so they don't last long but I used to buy them for £11. Wear most of the year.
To soft for cycling though. 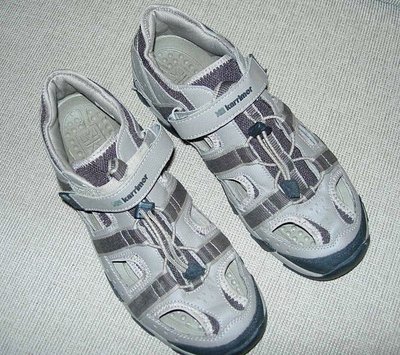 These are the forerunner, I have several pairs, they have an unique insole with bobbles which make them very comfortable.
A bit cheap so they don't last long but I used to buy them for £11. Wear most of the year.
To soft for cycling though.

I have cycled thousands of miles in them .... I wish they would bring them back ... The heels ... Such good heels.... With SPD plates they would be perfection ....
Be More Mike.
The Road Goes On Forever
Top

andrew_s wrote:I think that the Shimano sandals were available in brown maybe 3 versions ago

Shimano SD66s were available in brown - don't know if they still are. I have a pair along with a pair of an earlier model - the SD60 - in tan. The SD60 is a much nicer sandal than the 66 but the inner sole is made of a rubber material that crumbles and disintegrates over time.

That's SD66 on the left?
They look much better in brown.
Mick F. Cornwall
Top

Mick F wrote:That's SD66 on the left?
They look much better in brown.

I have an older pair of Shimanos (which some folks preferred) brilliant bit of summer touring and camping kit.

Interestingly enough, they really come into their own when it's raining and wet.
Top

Bought them a few years ago and tried very hard to find a stockist of the brown version - sadly to no avail. But soon got used to the black ones - the pleasure of SPD sandal cycling soon overcame the colour disappointment

Riding with the wind running through/gliding over one's bonce, brushing over bare arms, legs and toes without a care and only sun cream for protection is wonderfully liberating

The SD5 look even better - apart from the grey footbed. Why are men supposed to like grey

Bet they'd be Shimano gender diferentiated fuscia if there was a women's version?

Might get the SD66s out today (for the first time this year) if the temperature rises enough here in cloudy Snowdonia
Last edited by deliquium on 1 May 2017, 10:36am, edited 4 times in total.
Current pedalable joys

This drives me MAD.

Black this, black that, grey something else.
Women's stuff has COLOUR and shape and design.
Men's stuff is boring and drab.
Why?