I noticed a very tasty Condor bicycle for sale on eBay today that has rear facing front brakes. I have never come across this before and wonder if anyone has any comments. I guess they help improve the aerodynamics a little but otherwise what is the advantage?

I have rear facing front brakes on my tourer.
They work well.

The main advantage for me is that it leaves the area in front of the forks available for luggage.
Top

As far as I know, aerodynamics are the main advantage, similar to why the rear brakes on time-trial bikes are sometimes near the chainstays rather than seatstays. There's a very small but obvious risk of a failed brake pad getting trapped between wheel and fork which makes it a strange idea if you've no other motive for it IMO.
MJR, mostly pedalling 3-speed roadsters. KL+West Norfolk BUG incl social easy rides http://www.klwnbug.co.uk
All the above is CC-By-SA and no other implied copyright license to Cycle magazine.
Top

Alf Engers aka the King in full flight. Note the front brake along with levers behind the bars. Later he changed them back to the normal position before doing the first sub 50 minute 25 in 78.

Rear facing levers run the risk of self actuating - as you start to apply the brakes your weight transfers onto them, applying them harder....

Similar to the reasoning for the ten to two driving position - as you turn into a corner your hands are 'thrown' outwards, so the ten to two is a neutrally stable, whilst twenty past seven would tend to magnify any steering input.
A shortcut has to be a challenge, otherwise it would just be the way. No situation is so dire that panic cannot make it worse.
There are two kinds of people in this world: those can extrapolate from incomplete data.
Top

Pace used to do rear facing front brakes. Iirc they used to say that it improved performance as the brakes were pushed towards the fork rather than pulled away from them. Never noticed any difference myself.
BNB Community Cycling
Top

ofc the forks could be on backwards

We had them our Thorn Discovery tandem and the worked ok.
They're no different than rear brake which faces rearward

all kinds of things have been tried and (temporarily) have won favour amongst time triallists. For example in the 1970s there was a fad for having the brake centre bolts brazed into a TT frameset, so that a few grammes could be saved, or something.... Reverse-facing caliper brakes were just another one of these things. They had (and indeed still have) the obvious disadvantage that the brake cable is liable to be closer to the frame and is likely to restrict the range of steering lock.

One thing that having reverse facing brakes will do is draw comment; at one time I had a bike with mudguards that regularly went into the back of the car, in pieces. It had double nuts on the brake bolts so that I could get the mudguards on and off without disturbing the brake alignment. I figured out that if I reversed the rear brake, I could more easily remove the mudguards. It all worked fine, but it did draw a surprising amount of comment from other cyclists...

I ran the brakes on my race bike behind the forks quite a bit as well as taping down the flying cables. I'm pretty sure these 1970's attempts at aero made all the difference at the speeds I raced at! Not enough space on most newer frames to play with stuff like this!

The most common rear facing brakes are on brazed on pillars which can be put at whatever height the manufacturers want.

I have them on one set of Thorn forks and not the other. I cant say I have noticed any difference other than I can fit lights much more easily with the rear facing brakes. The most likely justification that I have heard is to avoid brake squeal. Though the alternative question could be asked, what is the advantage of having them front facing?
Yma o Hyd
Top

Just been looking at Mercian .............
The brake arm would foul the downtube when steering to the left. It would hit at about 10deg left.

Ruadh495 wrote:Doesn't a rear facing front brake need a longer reach, with the problems that implies?

Yes they need a longer reach, which is why the brake pictured a drop to it like this one 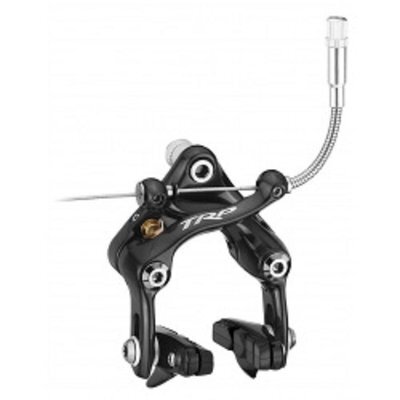 Ruadh495 wrote:Doesn't a rear facing front brake need a longer reach, with the problems that implies?

Yes they need a longer reach, which is why the brake pictured a drop to it like this one

I tried fitting those to my Rogers trike, but unfortunately they weren't long enough! Currently it has a canti brake on the front and a very ineffective drum brake on the the rear axle, I was wanting to add a back up to the canti that would have at least a chance of stopping me if there was a cable failure (it has happened to me, at the top of a long steep hill

). I've got a front drum brake hub now, just go to get round to building it into a wheel!