For discussions about bikes and equipment.
Post Reply
19 posts 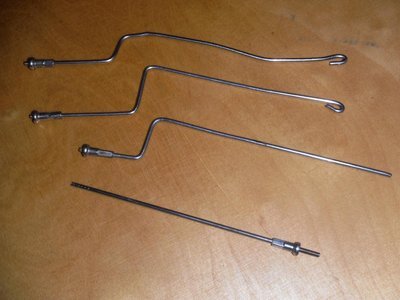 here's some that I prepared earlier...

I have experimented with the 'handle' shape and if articulating the wrist to drive the nipple, having the handle long, straight and coming almost (but not quite) back on the centreline suits me best (as per the third one down).

If the handle is shorter and a rounded end (on the centreline) is made, this might be more comfortable. However the two tools with rounded ends are not as good to use as the cranked one without.

A good point is that if you can't find the tool you last made, it is simple and quick enough to make another, with a different length of set, reach, or crank offset.

A flaw with the scheme is that if the nipple is screwed on far enough to leave the spoke flush with the nipple bottom (a good starting point for many builds that don't have overly short spoke lengths), then the tread engagement between the tool and each nipple is poor.

Unless the spokes are (too) short I normally use a spoke key after the driver to get to the 'start' point for the final part of building.

which rims are these brucey? how many wheels do you typically build over a period of time?
Top

I guess I build several wheels a week at present, probably a day a week on wheels I'd say. Most rims which are more than ~20mm deep and/or don't have double eyelets risk you losing the nipple inside the rim before it is over the end of the spoke. That is most of the rims that are used these days; shallow/double eyelet rims, once the norm, are becoming the exception.

Conventionally you can use a nipple setting tool and then a nipple driver of some kind. The bent spoke tool replaces both, so it is certainly easier and it is probably quicker and less fatiguing. You can't easily knock the nipple off the end of this tool before it is set! The protrusion of the centre part of the tool is adjustable, so you can set the nipples over the spokes to any uniform depth this way.

I had a bunch of old Sapim strong in an odd size, so rather than keeping a dozen of spokes in a drawer I made good use of some of that rare spare time: 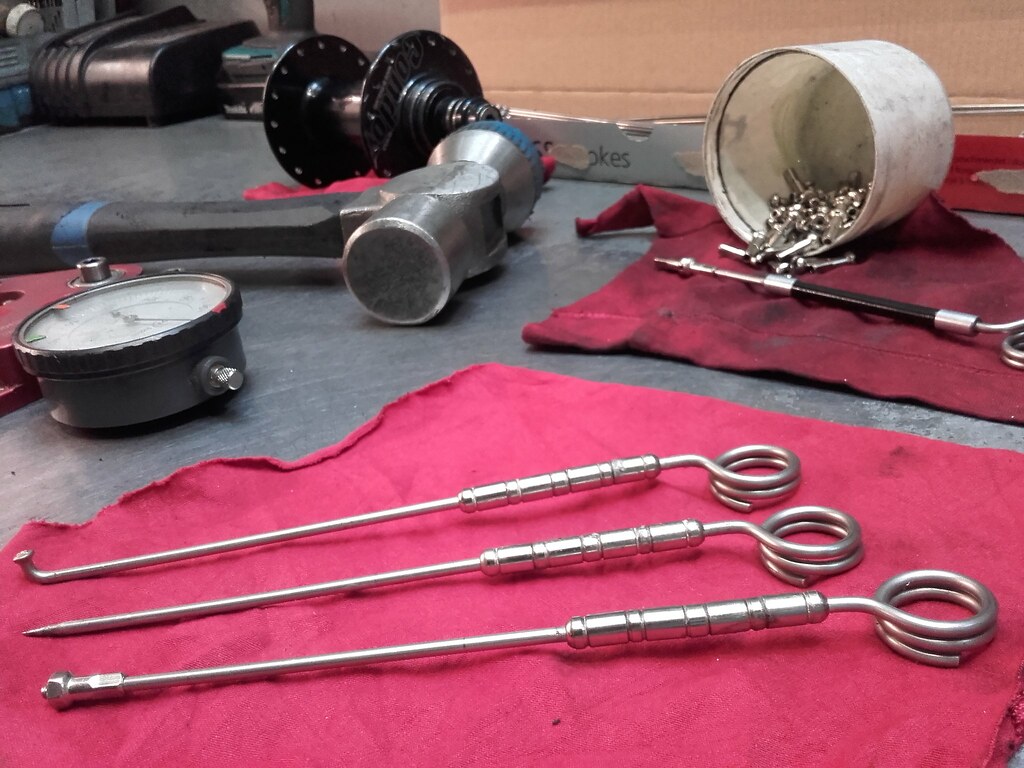 the one at the top is a "hook" that is very useful to pull out wires from those (rather annoying!!!) frames with internal cable routing; the one in the middle is a "podger" that is great to lift o-rings, rubber caps, and especially chasing the hole of brake/gear outer cables after been cut.
At the bottom, the evolution of the "nipple holder" that I've been using for many years; some spare Nokon ferrules (the only decent use you can make of those silly ferrules/cables) make a handle for easy spinning of the tool. Lacing a deep profile rim witout double-rivets takes less than 8 minutes

the nipple is flat at the bottom, and has a bit of threadlock so stays in place but can be adjusted, my preference is that a 12mm nipple can be screwed for 1 1/2 turn, longer nipples may require to expose more thread on the tool
It is by riding a bicycle that you learn the contours of a country best,
since you have to sweat up the hills and coast down them.
Thus you remember them as they actually are...
Top

Nice work. I might just copy that, my old nipple driver is getting a bit tired and I have quite a few builds on the go.
Top

a chum of mine is a wheelbuilder of several decade's standing; he uses a BR nipple driver to get the nipples set the same. For deep rims he started out with tools similar to Gattonero's. I showed him the cranked spoke tool and it turns out he prefers a version of that, with a slightly different shape handle because (unlike me) he doesn't crank from the wrist. He reckons it has saved him a huge amount of time.

I made my nipple driver years ago from an old pozidrive screwdriver, just ground two sides down and rounded out a pip on the end about 3mm long. It works perfectly and just pops the driver out almost exactly the same spot for every nipple. If the spokes are calculated at just the right length it takes up the tension just enough to be able to set the outside spokes at the hub.

I have another that I made from a Yankee screwdriver bit that I used for a while with the yankee driver but never really took to it. It would probably be fine in an electric screwdriver, but sometimes simple is best.
Top

most electric screwdrivers seem to turn a little slower than you would like. Cordless drills are usually much less handy than you would like, but there are much smaller models now available that might be better for speedy nipple turning.

I used a smaller spiral drive screwdriver than a 'yankee' for a while and it was considerably more wieldy, despite needling more 'pumps'. However I wound up using it mostly for taking old wheels apart, where a manual screwdriver that was small enough to twirl rapidly didn't have enough torque to turn partially seized nipples.

Where nipples spin freely, I presently disassemble old wheels ( eg. in which I might want to re-use the spokes) by unscrewing the nipples a couple of turns each using a spoke key, LH side first and then I use the twirliest screwdriver to hand to undo the nipples all the way. I often use an old spoke with a flattened end (resembling a screwdriver bit with a slight pip) for this purpose. The spoke tool is left straight and full length and both hands are used to twirl it (which is much faster). A nipple is bonded onto the top end of the spoke so that some extra force is available should the nipple not turn perfectly freely. Typically all the leading (or all the trailing) spokes are unscrewed this way, the hub is turned, and the remaining nipples then protrude far enough with most rims that they can be unscrewed by hand.

It takes about ten or fifteen minutes to disassemble a wheel this way, which is OK if you plan to re-use the spokes but much slower than just cutting them out of course.

Hi,
On skip wheels where I save the hub about a minute

A 5mm flat blade screwdriver with a 6 or better 8" shaft with fingers of both hands for twirling is hard to beat, as said if the nipples are free.
Standard battery drill is heavy and will make your arms ache, sitting on low chair with wheel between knees and one hand on wheel one on drill.
Modern smaller ones might be better as said, Lidl did one last week or so for £20 would of suit.
We are not all professional wheel builders, us diy'ers just make do. 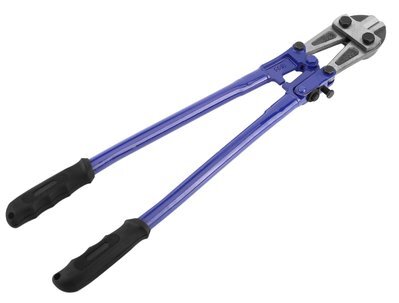 I have to say that I quite like my peace and quiet when I'm building wheels, or perhaps idly watching a movie or something. Noisy tools are less favoured, even if they are a bit quicker.

I just now used a spoke key and a cranked spoke tool to re-rim a no-eyelet rear wheel. Admittedly it was only a 24-spoke wheel, and it isn't finished yet, but it took about 20 minutes to detension the old wheel, swap the spokes over and get it within a couple of mm of true (the replacement rim wasn't quite the same model), and about 3/4 tensioned. Another fifteen minutes work and it'll be done.

I might use the same method again even when I'm not building with a rim that is this deep; handling the nipples is normally fiddly anyway, and at no point is this required during re-rimming using this technique. In fact I didn't have to put down either tool from start to finish.

Hi,
If I get this right, both hands, spoke key and nipple tool, and old and new rim side by side?
Battery drills etc, revolutionised drilling holes by hand and driving screws, but a tad cumbersome for wheel building I admit.
I did a job taking out and putting in many screws M2.5 by hand , some onlookers said why not try a battery drill?
Too cumbersome, after about two weeks I had RSI, similar to when I was doing full time mechanics, tennis elbow is a thing of the past when battery screwdrivers came along

I occasionally have a need for a cordless drill that subjects it to rather intense use. I am somewhat reluctant to buy another one because, having spent at least a grand on them over the years, I find they all die horribly. Failed batteries, failed chargers, broken motors and gearboxes. Saves the poor old wrists though I suppose.

Hi,
Wood work building cupboards / shelves etc, up a ladder etc, and pays for itself in first week, that using a torque driver for screws etc, I tend to finish torqueing screws by hand, not allowing the screw to head to dive into the wood or bit to graunch the head of screw like diy tv programs

I was lucky with mine still have them after 15 years but several batteries, modern lithium should be better.
But main use is woodwork, there is no substitute for mains power tools industrially, I feel workmen overuse the battery type......and thrown them on the concrete too

Hurray! I have just laced a wheel using the Brucey patent nipple-gripper. (I only came across the post today).
(a) It works brilliantly
(b) Why have you only just got round to telling me about it?
(c) I got a very funny look from my wife when I proudly told her what I had made. Ian
Top

Hurray! I have just laced a wheel using the Brucey patent nipple-gripper. (I only came across the post today).
(a) It works brilliantly
(b) Why have you only just got round to telling me about it?
(c) I got a very funny look from my wife when I proudly told her what I had made.

Now there is a coincidence! I did exactly the same this morning with a Bruce special. Only difference is that I told my son that I had made a nipple driver. His reaction was a bit more blokish than a funny look.