For discussions about bikes and equipment.
Post Reply
47 posts

I have taken ownership of the above frameset. After four years and about 11,000 miles on a Ribble 525 I've treated myself to something with wider tyre clearance (before they all disappeared). (https://www.spacycles.co.uk/m2b0s143p35 ... l-frameset)

I enjoyed riding the Ribble but my two biggest gripes were: 1) the madness of designing a 'winter' bike only capable of taking 23mm tyres with mudguards and 2) I found the handling fairly awful downhill (not sure this will be fixed by the 631 though, as I don't pretend to fully understand the ins and outs of frame geometries and trail etc. but at least there'll be more contact patch!). I never tried changing forks, incidentally. The audax special comes with a 531 fork.

It's going to be a labour of love over the coming Winter. I'm thinking of a classic build in silver, which narrows down the choice of components somewhat, as everything seems to come as black alloy or carbon these days. I'm probably going to assemble a complete Veloce 10 speed groupset, mainly because I like the aesthetics of it and of trying out Ergo shifters, which will be my first foray into the world of Campag. Finding groupsets in traditional alloy is becoming difficult.

Other finishing kit will likely be a combination of Thomson and Ritchey with Clement Strada 28mm tyres (which look great although I've read that amber side walls fatigue much faster). SKS full length mudguards.

If anyone want to weigh in on the groupset then my mind is open, but otherwise I have the build fairly set in my mind. (ps I did look at the later Potenza kit but honestly I thought the crankset was just hideous...looked like Shimano). Athena stuff is mostly sold out.

(PPS - anyone wondering why I'm not simply transferring everything across, well, I'm recycling the Shimano 105 kit onto a Bowman Palace R!) 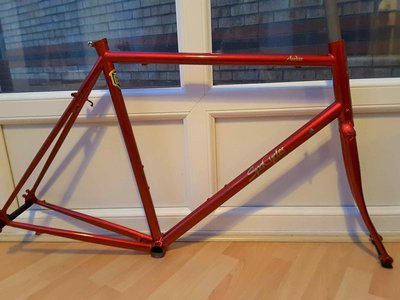 complete campag groupset? Hmm, you will I think need to use non-campag brakes, since they don't bother to make brakes for folk that use non-skinny tyres and mudguards. BR-R650 are good.

Silver parts? It will be a bit like strawberries and cream....mmmm...

BTW campag 10s ergos up to 2007 would be my choice; later ones are variously not as good IMHO. If you use those ergos you are not tied into 10s campag otherwise; 8s shimano will work without issue and RD-4700 10s mech and most road shimano 11s rear mechs are within an gnats of being perfect with 10s indexing too.

olivermleach: what size frame is it that you bought, if I may ask. Thanks
When the pestilence strikes from the East, go far and breathe the cold air deeply. Ignore the sage, stay not indoors. Ho Ri Zon 12th Century Chinese philosopher
Top

Looks lovely that frame, and the idea of silver bits and bobs will look classic. Do you know what the fork's specs are?
As Brucey says, if you're thinking of using a Campagnolo groupset and want to run 700 x 28mm with 'guards, you won't be able to fit Campagnolo brakes as the reach is too short. Nobody will ever notice that the Shimano long reach brakes don't match the Campagnolo groupset, but if you're a stickler for aesthetics, it might just annoy you a little. If you do decide to go with Campagnolo, I'd suggest keeping an eye out for a used Campag chainset with a square taper bottom bracket. Ones in good condition are not hard to find. Or if you can live with mixing components from different manufacturers, one of the excellent square taper Sugino chainsets that Spa sell, which will give you a wider choice of chainrings while saving you a few pennies.
Top

But Athena does continue as a triple-only group, which might interest you.
I should coco.
Top

nice looking frame - any chance of posting individual weights for the frame and fork?
thanks
mark
Top

Thanks for the heads up on the brakes. One mistake avoided. I had been hoping it was mainly frame/fork dependent but clearly this is my first lesson in the world of campag.

I'm not 100% set on campag but I am particularly keen on traditional aesthetics (or 'strawberries and cream' as Brucey points out) with the cherry red frame and the 'silver' 105 groupset looks like plastic, not metal. I am feeling a bit stickler on this build and am in no hurry.

If I'm honest the athena triple kit is a little pricey. Also, although it is likely to be put into use with some light touring a compact chainset should suffice.

Incidentally, a Stronglight compact double square taper crankset is also available through Spa and equivalent weight to the Veloce with classic looks. Do you recommend against the groupset stock power torque bottom bracket?

Will re-weigh the frameset later today and update you but from memory the frame was circa 2kg and the forks (uncut) 900g. So I will be aiming to keep the weight of other parts to a minimum to go sub-10kg (possibly ambitious). The Ribble in current guise is 9.6kg but the carbon fork saves weight.

What campag tools would I need for the workshop? I might use a kmc chain as I baulked at the idea of £90 for the installation tool (the irony of the long runtime of campag chains means
I would see very little return on investment in the tool. Perhaps a job for the LBS and go with the campag chain for smoother/quieter running (apparently).
Top

I note your brakeset recommendation Brucey. What about Miche long drops? I have a set on the Ribble and they always felt a bit spongy with the 105 STIs but perhaps that was the cable pull, not sure how they would match with the campag ergos.

Also Brucey, how would I go about finding pre-2007 shifters? Presumably look out for some in good condition secondhand as there does not seem to be any NOS. The Veloces are tempting in their short-term simplicity as they can be ordered for around £85 new. Most of the Veloce parts can be found individually online with significant discounts.
Last edited by olivermleach on 19 Oct 2017, 11:23am, edited 1 time in total.
Top

Jezrant - which fork specs in particular? (Doubt I will know)
Top

If you weren't already aware this is an Arvis (sp?) frame which is sold under several badges, the most common probably the Hewitt Chiltern:
http://www.hewittcycles.co.uk/hewitt-chiltern
There may be some variations of the braze ons (there are on the touring version which shares the same main triangle) and in the painting, but they are otherwise the same. Nice frame and a bargain at the Spa price.
GB Cycles are a good place to look for NOS Campag, though even their stocks are dwindling. I used them for most of the parts to build my Audax bike (Not this frame) with 9spd Campag, NOS ergos sometime appear on Ebay, though the prices are rising, I have parts from four groupsets (And the Shimano brakes), all work faultlessly together.
Top

olivermleach wrote:Incidentally, a Stronglight compact double square taper crankset is also available through Spa and equivalent weight to the Veloce with classic looks. Do you recommend against the groupset stock power torque bottom bracket?

The Stronglight does the job nicely for me, the BB uses a tool that could be the commonest cycle tool in existence, and square taper is well tried and tested. Disadvantage - well none to me, but it is a little heavier and apparently less stiff, not that I'd be likely to notice. I have a Campag Record triple chainset, but the correct ISO bottom brackets are becoming hard to find, that's not a problem you'll have with Srtronglight or anything else that uses JIS.
I should add that I have no personal experience with power torque, though I understand you'd need the BB shell faced to get a good fit, though that isn't a big job for a bike shop.
Top

My Audax Special frame arrived last week.
61 cm frame & forks approx 3.6 kg so no featherlight, but lots of nice touches - plenty of braze-ons including downtube bosses and threaded bridges (?) for securing the rear mudguard. I don't expect to build it up soon though, it will wait until I need it or its value rises!
Top

Silver components are essential with such a frame, and I cannot understand why so many people prefer dull black items, leading to the present drought of silver components.

The frame has down-tube bosses. You could consider using them for down-tube shifters, the way I’ve done with my regular Spa Audax. (Chainrings since replaced with properly silver ones.) They simplify cable routing and reduce costs and maintenance requirements.

I think of complete groupsets like complete suits or complete ingredient kits for recipes: cheesy things to be avoided. Better to choose components on their individual merits.
Top

olivermleach wrote:I note your brakeset recommendation Brucey. What about Miche long drops? I have a set on the Ribble and they always felt a bit spongy with the 105 STIs but perhaps that was the cable pull, not sure how they would match with the campag ergos.

I have some on a bike working with Chorus 10 speed levers. They stop well. Likely designed to work with Ergos as Miche groupsets use Campag shifters.
Top

I had an inkling that might be the case, Pete75, given that the Miche parts are also designed in Italy.
Top
Post Reply
47 posts