For discussions about bikes and equipment.
Post Reply
35 posts

Regarding the fit of spokes into the hub. This can (IME) make a significant difference in the apparent spoke length, depending on the length of the J bend, the size of the flange hole, the flange thickness whether the holes have sharp edges or not, whether the flanges settle or not, and the degree of enthusiasm with which you approach stress-relief.

To help to demonstrate this point, I just carried out a little experiment. I took a wheel that nominally accepts 296mm spokes. I fitted three spokes in turn to the same (outside) position in the wheel, each using a slightly different approach, and tensioned them. The crossings in this wheel were not braced, so that was one less variable to worry about.

A new DT PG spoke, fitted in the usual way, and then enthusiastically stress-relieved, came flush with the top of the nipple

A nice new DT PG spoke, when tensioned but not stress relieved, came flush with the bottom of the nipple slot..

A third new spoke was spoke washered so that so that the J bend was a snug fit and needed to be cold-set by a few degrees (which BTW constitutes the best fit, IMHO). When tensioned, this spoke came short of the bottom of the nipple slot, by about two turns.

The photograph below shows the three J-bends in order, from top right to bottom left. 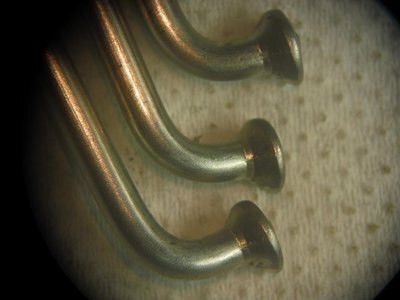 The middle spoke is still in the as-received shape, and represents what happens to many spokes that are fitted into hubs with a loose-ish fit, in wheels that are not stress-relieved; they come out looking the same as when they went in.
[ IME this is unsatisfactory, in that the spokes will see considerably greater fatigue loading in service; either of the other two conditions is an improvement over this.] The bends in the other two spokes are of slightly different shape only, but this was enough to make them about four turns (~2mm) different in length in the nipple.

Note that this experiment was carried out using a steel hub, which (through use) had a slight radius where the inside of the J-bend bears against the edge of the hole. This was unchanged after the experiment, as judged by refitting the second spoke. Note also that most decent wheels are built onto hubs with aluminium flanges, which have considerable potential for deformation (in service and/or during stress relief), and this creates yet further scope for altering the apparent spoke length. Had the experiment been repeated with 15g or 13g spokes I daresay there would have been a different result.

Thus the idea that you can just ignore the quality of fit of spokes into flanges is clearly not one that holds up under scrutiny. Whilst it is true that if you always use the same types of spokes in the same type of hubs for all your builds, you may not see much variation, few wheel builders will always be able to do this, and some attention needs to be paid to this aspect of the wheel build.

In particular if you use spokes with different J-bend lengths, and/or improve the fit of spokes by using spoke washers where necessary, spokes that are (without washers) 'just right' for length (but not for fit into the hub) are liable to come up a bit short in the nipple once washers are fitted.

After inaccuracies in ERD measurement, IMHO this is often the largest source of error when calculating spoke lengths; even without differences in the way the hub settles, it can produce variations in apparent spoke length of ~2mm.

It's a surprise to me that straight pull spokes haven't become more popular. Yes, the hub shells have to be more complicated, but plenty of factory wheels have dealt with that problem easily and it completely solves the problems you nearly always get because of J bends.
One link to your website is enough. G
Top

hubs for straight pull spokes can usually only be built with a particular spoke pattern and perhaps even a narrow range of rim diameters, before the pull isn't really straight any more.

In addition it has yet to be demonstrated that, in bicycle use, they really offer any appreciable advantage, in return for the poor parts availability, the restricted choice of build patterns, and the (usual) increased expense of manufacturing a more complex, non-commoditised hub.

The problems of J bends are mostly overstated or are soluble, IMHO. It seems that the fatigue performance of a J bend, (even in an indifferently built wheel, that is not stress-relieved) is only a bit worse than that of the threaded part of the spoke that goes into the nipple, if both are the same size. The fatigue properties of the spoke head (in a straight pull spoke) are likely to be comparable, or worse; there really is a nasty stress concentration at the base of head in many types of spokes.

I think that in a J-bend spoke, the different fit in the hub means that the cyclic loads on the head are usually lessened, else heads would pop off more often than they do.

An example of straight-pull spokes being used in the mass-market is as follows; for a while shimano made 24-spoke wheelsets for hybrid bikes that had a modified alfine 8 hub in the rear, with straight pull spokes. The spokes themselves were made by Sapim, and were 13g at the head (and IIRC 14g in the shank, like the 'strong' model), so should have been of good quality. However experience is that the heads regularly pop off the spokes in these wheelsets. When this happens the rim deflects so violently that the bike is unrideable (instantly) and in most cases the rim takes a set so that the replacement spoke needs to be much tighter than all the others to make the wheel straight again. That much is in good part due to the lack of spokes, but I don't think J-bend type sapim strong spokes would break as often as these do. Now, I don't know of any LBS which stocks these spokes. They can be ordered from shimano and they are about £5 each. A boxful direct from sapim is presumably an expensive old do, too. To cover the spoke lengths required for just two versions of this wheelset requires four different lengths of spoke. 14g spokes don't fit in the hub; they will pull through instantly because the heads are not big enough. The best you can usually hope for is that an LBS has the wit to straighten (ugh) a 13g spoke with a J bend and to use a (flimsy, slim bodied) converter nipple into the rim. Since black 13g spokes are as rare as rocking horse poop, the 'repair' will probably still stand out like a sore thumb.
All for what....? A different look? Hmmm....

[edit; BTW the spokes in those wheels often break at the other end too, because the rim entry angle is so extreme. Shimano didn't make the rims angle-drilled to allow for this.... No wheelbuilder worth their salt would build an alfine hub full tangent BTW (because of the bad rim entry angle), yet that is the only option that the special hub affords! I have such a hub amongst my collection of bits, and it is pretty much 100% useless; I have struggled to think of a use for the hub, other than a donor of internal spare parts.]

Note also that if you use straight pull spokes in a rear derailleur wheel, a common outcome is that the bracing angle of the spokes is less good than if J bend ones were used instead. This appears to arise because the commonest method of mounting the spokes in the hub (I'm thinking of models from mavic and specialized here) takes them further away from the largest sprocket and further away from one another; this all makes (at any given overall wheel dish/number of speeds) for a weaker wheel, again in return for no real benefit.

Note also that many wheels built with straight pull spokes do not have (or sensibly could have) braced crossings, for good or ill.

A special problem with straight pull spokes is that in many cases the spoke tries to spin in the hub when you try to adjust the tension. Bladed spokes can be held easily enough without damage arising, round ones less so. In many wheels with straight pull bladed (aero) spokes, any advantage from the aero profile is lost; in use, the spokes (especially NDS ones) tend to spin wholesale in their mountings, so that the resultant wheel is actually less aero than it would be otherwise... If the nipples are not threadlocked, there is about double the chance that the spoke will slacken, because in addition to the nipple unscrewing from the spoke, it is also possible for the spoke to unscrew from the nipple.

To the consumer there is more downside than upside, as I see it. To wheelbuilders/LBSs I don't think it is any different; they need a much larger inventory of parts to repair (leave alone build) wheels with straight pull spokes.

Unless I'm missing something...?

Hi,
Which would you say was the higher or more damaging force / cyclic stress.
Pedalling torque or lateral sway when pushing hard and or low cadence up hill?
Do we need to include just rolling stress also.

Motorcycle wheels are some what different because the lateral force is got to be minimal, power is delivered without lateral sway.
And of course hub to rim diameter ratio is considerably lower than bicycle wheels, don't see spokes loosening much, spoke breaks yes, stress relieving a M/cycle wheel

as for the relative contributions of the various things that load the spokes up, "it depends how you ride the bike". Human engines work differently to one another and folk wrestle the bike/throw their weight around differently too.

Having said that, if you ride up a steep hill or sprint out of the saddle, you will not escape severe loading the back wheel spokes. For most folk this does not comprise much of the duty cycle, but for some it will.

OT I know, but lateral loadings and high uneven spoke loadings in motorcycle wheels are likely to be commonplace. All the braking loads go through the spokes, and motorcycle tyres are wide enough that the contact patch isn't in the middle of the tyre whenever you are leant over; also you might 'hang off the bike' a bit. These things cause high loads in spokes and net lateral loadings.