For discussions about bikes and equipment.
Post Reply
39 posts

Some years ago I did a similar thing with a 36 hole rim on a 40 hole Sturmey Archer hub - so large flange. I worked out the variation from standard calculated lengths by drawing approximately to scale sketches of the spoke positions in a 36 hole hub then superimposed those for the 40 hole hub. A bit of simple trig allowed me to finalise the lengths.

While it was successful it was a bit of a faff, so now I build my 40 hole SA hubs with 32 hole rims. This is much simpler, requiring only two spoke lengths.
Top

robc02 wrote: ....I build my 40 hole SA hubs with 32 hole rims. This is much simpler, requiring only two spoke lengths.

yes indeed that is a good way to go. 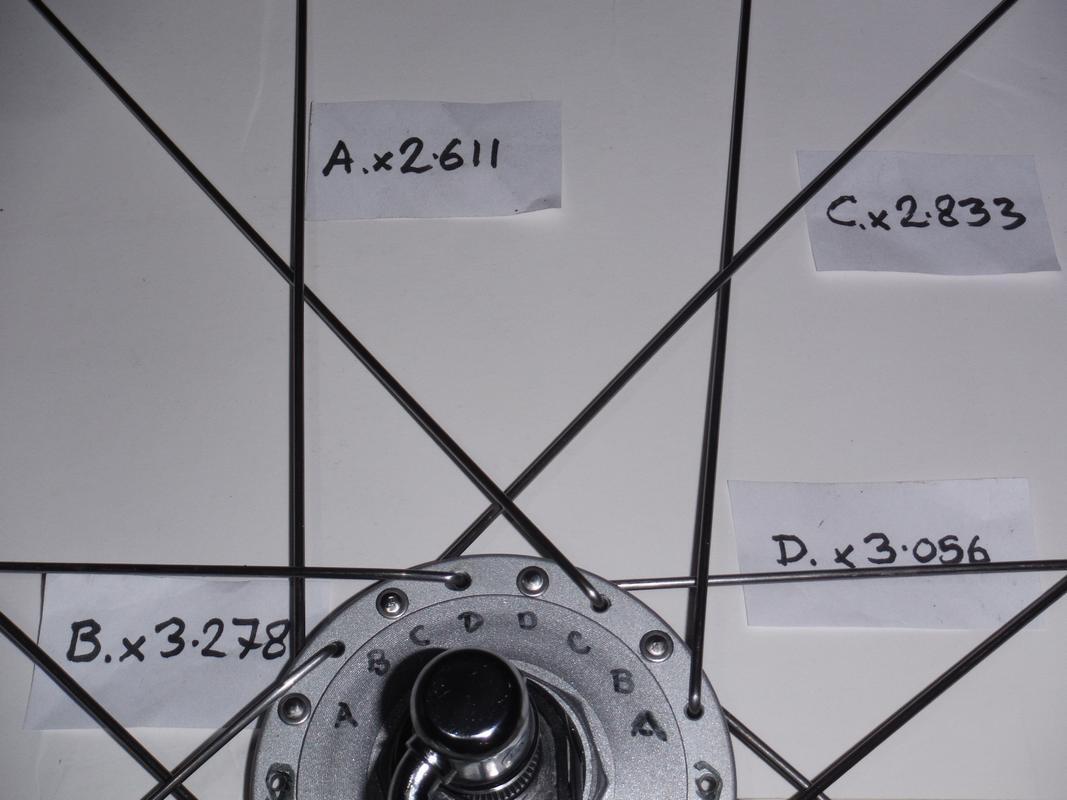 with the following changes

1. Imagine there to be another unused hole in the flange between positions marked 'D'

2. Calculate spoke lengths for 32 spoke wheel but (if building x3) use fractional crossing values of

as per the previous recipe, be sure to lace the spokes carefully, following the pattern closely. There is an alternative pattern that uses x2.9 and x3.3 instead; needless to say these spoke lengths won't work in the pattern depicted and vice versa.

whilst I am on a roll, here is a recipe for lacing 28h rim x2 onto a 36h hub. Seven spoke lengths are required, A-G.

This photograph shows the lacing on one half of one flange (NB the spokes are through the flange, but are not attached to a rim, so the angles are not correct) 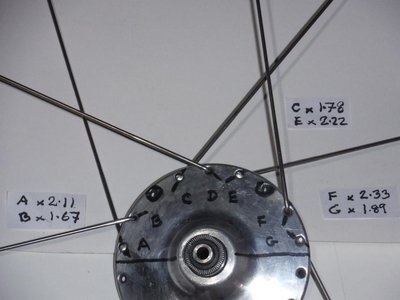 This spoke pattern is mirrored on the other half of the hub flange so spokes are as follows, starting on the left, running clockwise around one flange, showing spoke orientation and fractional crossing value

Calculate spoke lengths as for a 28 hole hub, using the fractional crossing values.
The mirrored spoking pattern is necessary because otherwise there would (amongst other things) be a net torque on each flange.

Unlike most other patterns, the spoke lengths will work out perfectly if the pattern on the left flange is rotated exactly 90 degrees vs the pattern on the right flange, i.e. so that there is a 90 degree rotation angle between the four type 'D' spokes. You can of course swap inside and outside positions in the pattern on one flange, but you can't change leading for trailing in the same way.

as mentioned in a previous post, for rims that have a number of spokes on each hub flange that isn't divisible by four (eg 28h) there is another type of solution that you could call 'semi-spanish' spoking, in which case the pattern on each flange is rendered more symmetric by inclusion of a few radial spokes into an otherwise crossed pattern. I first built a set of wheels (28h rim onto 36h hub) using this type of pattern about 25 years ago and they worked fine.

It turns out that there is a write-up about a similar approach on the Sheldon Brown site, here

which builds this pattern The unused spoke holes in the 36h flange are between the green and red positions. The grey spokes are on the other (rearward) flange.

The Green(alt) value is to be used when the Green spokes are in the unused flange holes as depicted in the picture above. You may wish to do this if you think the rim entry angle is a bit too much otherwise.

In full 'Spanish spoking' all the spokes are arranged in triplets, so this spoking pattern is only used throughout on 24h and 36h wheels, typically. It entails that three spokes cross over one another at the same place: I suggest that the triplets may be best achieved by not bracing the crossing of the (near) tangential spokes, and that the radial spoke is perhaps placed between them. However there are many ways of doing it and none of them are perfect, in fact.

Sounds like a chess opening! (But apparently it’s more complex than that.)

I’m glad you periodically publish threads like this one so that your findings can be accessed by others. It might be worth saving them in the Wayback Machine to increase the odds of the info being available many years in the future. You can manually invoke a save by searching for the URL and clicking “Save this url in the Wayback Machine” when the “Hrm” error message appears. Just a thought.
Top

that is not a bad idea.

another wacky pattern is this one, which I call 'fannish spoking' 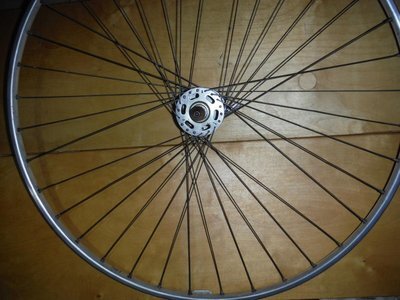 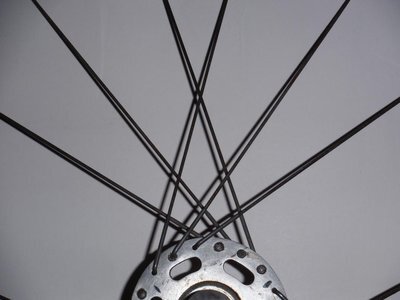 a single fan of six spokes

This does nothing for wheel strength, but then again it isn't particularly harmful, either. I wouldn't recommend it for hubs with weak flanges or for wheels that see a lot of torque through the hub (so not for brake hubs or perhaps SF rears). Its raison d'etre is mainly to look different. Just a bit of fun.

[edit; actually there is one small practical advantage in service; it much is easier to reach between the spokes and clean the hub, with this pattern.]

However it is potentially very easy to build; all the spokes are the same length (as for a standard x3 wheel) and there is only one braced crossing in each fan. The wheel in the picture was originally built x3 symmetric; I just moved 12 spokes to convert to the revised 'fannish' pattern. If lacing from scratch, it is probably easiest to build skew (i.e. so that the inside spokes on one flange are leading, and on the other flange trailing). This allows you to put all the inside spokes in first , and all the outside spokes in without any obstruction, other than the six (total) braced crossings.

There is an analogous pattern (with four smaller 'fans' of four spokes each side of the wheel) which you can create using a 32x2 wheel as a starting point. Again the spoke lengths are identical to the usual ones you would use for a 32x2 wheel. 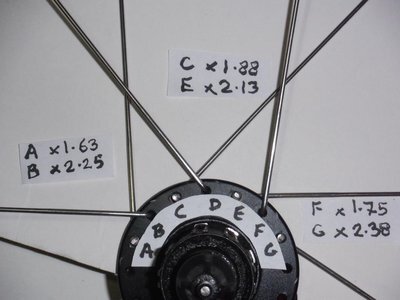 The pattern above is mirrored onto the other half of each flange so CW from the left the spokes run as follows;

The pattern on the second flange will line up (almost? * ) perfectly if it is not rotated from the first side.

this is an example of 24-spoke Spanish spoking this is an example of 36-spoke Spanish spoking which some folk call crowsfoot spoking. In this variant the crossing spokes make a standard crossing of another single spoke as well as the triplet crossing.

As you can see the triplets are not all laced the same way.

The crossing spokes in this pattern are the usual length for 36x3 spoking.

Could you post a picture of a whole wheel with 36h hub and 32h rim?
Top 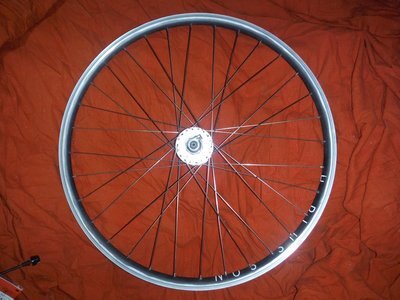 unused holes in hub at NE and SW compass points 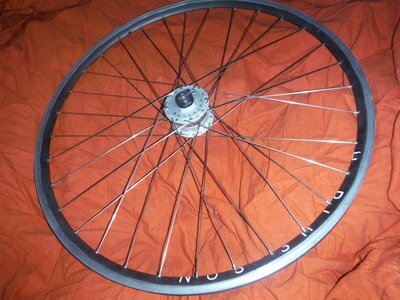 for the most part, the wheel just looks like, er, 'a wheel'. You need to look carefully to see that there are unused spoke holes in the hub.