For discussions about bikes and equipment.
Post Reply
396 posts

Been busy this afternoon as we'd had a delivery of stuff including some flat-pack furniture. Been assembling it, and all done, and now it's Beer o'Clock.

Ride Moulton tomorrow, and I'l put some blu-tack on the rear "suspension" rubber to see the travel over the bumps.
Should be available in the afternoon to do the ratchet strap experiment with a ruler to show the compression.
Photographs to accompany it all of course.

Was out in the workshop this morning, and checked out my new Simply Bearings bronze bushes. I still have the old original worn bushes and the flange thickness of them is 95thou ................ my micrometer is Imperial.
The Simply Bearings one are 125thou, so will need reducing by 30thou of course.

I had a play and a thought about the DIY system with a file and a drill, but I reckon 30thou is too much to file like that. It will need a lathe to do efficiently and accurately, so I'm going to call in a favour or two with an engineer or two.

No rush of course, but if it's a success, the job can be repeated as and when.
Mick F. Cornwall
Top 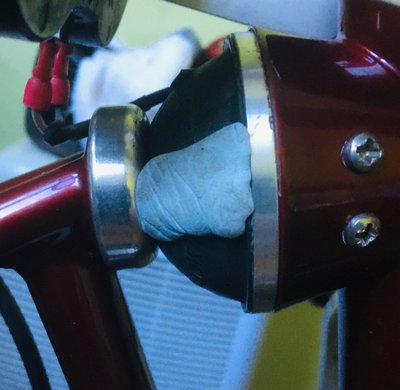 In any case, I reckon it’ll fall off.
Top

the rubber bulges outwards as it is compressed; I don't expect this approach with the blu-tack to give an unequivocal result.

My thought was that (with plasticine rather than blu-tack) you mount a suitably sized blob, on a spacer if required, such that it will get squashed if the gap gets smaller than a certain size. A film of oil (or greaseproof paper?) on one surface might prevent sticking, which if it occurs may lead to misleading results.

What you need to do is to affix a stick to the main frame art of the suspension (the bit with the 4 screws), and then fix a marker pen which touches the aluminium section on the rear triangle.
As the suspension works then it will draw a line which you can later measure.

I was out yesterday on my APB, and this thread was in my mind. Riding down a cyclepath with "natural speed bumps" caused by tree roots pose no trouble to the suspension front or rear as the bike just soaks it up much better than on a rigid bike.

If you have a smartphone then try installing a vibration/shock recorder and try cycling a test loop with various surfaces on both Mercian and TSR?
I may do the same (although I need to fix the brakes on the tourer first)
Top

gazza_d wrote:What you need to do is to affix a stick to the main frame art of the suspension (the bit with the 4 screws), and then fix a marker pen which touches the aluminium section on the rear triangle.
As the suspension works then it will draw a line which you can later measure.

Would not a slight variation of this scheme work better?

On a 20mile ride this morning out into the Devon countryside and back.
The Blu Tack stayed on perfectly.

I'll let the photos speak for themselves, but as an introduction, the's a photo of the Blu Tack after the ride with a gap smaller than the thickness of a 2p coin, two photos of the bike non-compressed, and two with it VERY VERY compressed. I used a stronger ratchet strap. 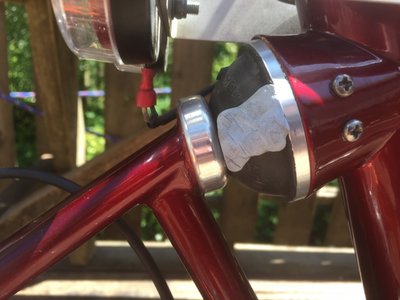 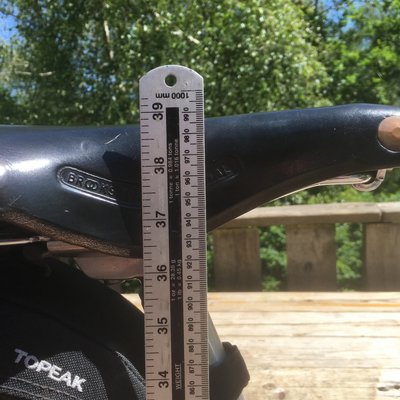 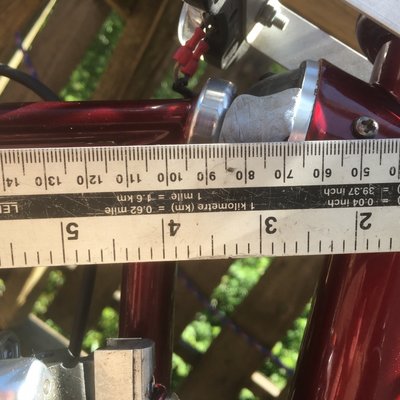 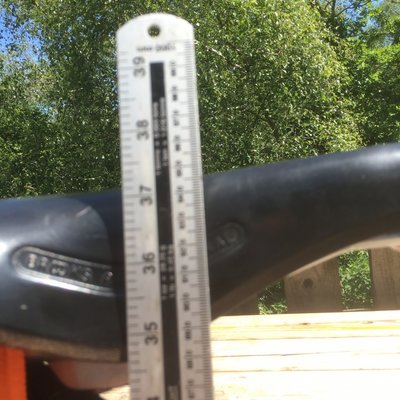 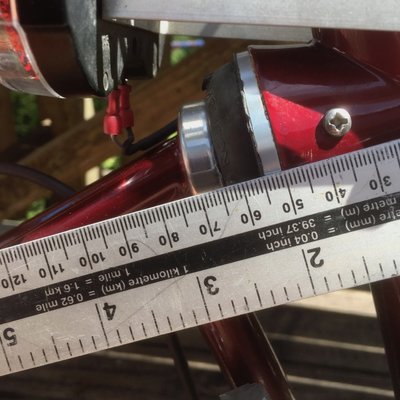 almost meaningless; as I said upthread already the rubber bulges outwards as it is compressed, so I'm not sure what dimensional change you expected to see, exactly.

Graham wrote:- My Marin East Peak FS has play in various suspension bearings. ( Which I will live with until one of us comes to an end. )

Come on Brucey, there is some meaning in all this.

The other day, I said that with a finger on the rear end of the rubber, I could feel about 1mm of movement.
You poo-poo'd this as meaningless and I couldn't know.
The Blu Tack experiment, you poo poo too.
My compression test, you dismiss too.

I am telling you, that in use as a road bike, the Blu Tack has told the story.
There is no way on God's Earth that the rear rubber will compress from 18/15mm down to 10mm in real use.

How much of an angle has the rear pivot gone through when the top of the rear triangle has moved 5mm?
Maybe 3degs?
Do the maths for me please.

Whatever the angle, even at a HUGE compression like I've shown, that it will NEVER get to on the road, the rear pivot is rubbish no matter what grease you inject into it. It needs replacement annually or perhaps bi-annually ..................... full stop.


PS.
Next experiment is to replace the rubber with wood.
I'll report back on the ride quality in the next few days.
Mick F. Cornwall
Top

Mick F wrote:.
My compression test, you dismiss too...

I have suggested several methods by which you would be able to determine how much the thing moves when you are riding the bike normally in an unequivocal fashion and you have basically done everything but those things. I am sure you can find lots of other ways of not finding out what you are trying to find out too....

In any event the exact angle of movement is always going to be 'small' in relation to what would be necessary to ensure that lubricant is properly redistributed in the bushing so it hardly matters.

Upthread someone suggested a rubber bushing instead and I don't think that is a bad idea, provided it is done in the right way.

I agree with Brucey.
The movement at the cone and the pivot is almost meaningless. If it isn' t then maybe you actually need one of those new-fangled mountain bike things with about 8 inches of travel.
As moultons were initially intended for road you don't need a lot of travel.
What you need to do is to test it with a smartphone running a vibration recorder app strapped to the rack or the frame (or even yourself) and record taking both the Moulton and the Mercian over a test course with some bumpy bits.

What would be marginally interesting would be to see what if any difference locking out the rear suspension would have on overall performance and handling. there will always be a trade off though.
Top

Vibration App? Are they expecting an earthquake down in devon?

Mick F wrote:How much of an angle has the rear pivot gone through when the top of the rear triangle has moved 5mm?
Maybe 3degs?
Do the maths for me please.

You said the pivot to cone-centre distance was 220 mm.

Imagine a full circle with a radius of 220 mm for a moment. That would have a circumference of 2 × π × 220 mm = 1382 mm (since π is roughly 3.14). Because the movement at the cone is small compared to the full circumference of this circle, we can ignore the difference in length of a straight line and a small arc of the circle with equal end points.

Otherwise SOHCAHTOA if you remember any of that.
Top

Thanks for the maths!
I've forgotten it all, and it seems difficult for me nowadays.

I've turned the bike upside down, and removed the rear suspension. Photographs to follow.
The fact that the rear pivot moves, is not in doubt, though the amount seems up to interpretation, but a degree or two is about it.
If it's millimetre movement at the rubber or even three millimetres is besides the point, but as far as I'm concerned, it isn't much.

So what?
Does it matter?
The fact is that it isn't much, is unarguable.

By feeling the play side-to-side after only three and a half thousand miles since the rear pivot was renewed, it's on its way out.
This is only since Jan 2018 to now. That's two years of riding, so it seems to me that you need to do the refurb annually despite the cost?

The obvious thing that I found out this afternoon, is that with the bike upside-down and the rubber cone removed, you can elevate the whole back end 45degs and check the play. Absolutely zero that I could detect.

Next job for me tomorrow, is to remove the rear end and mark the bushes. 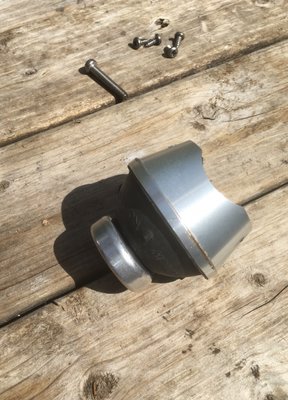 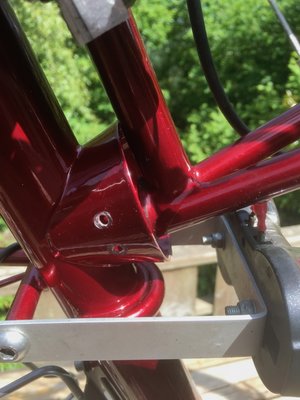 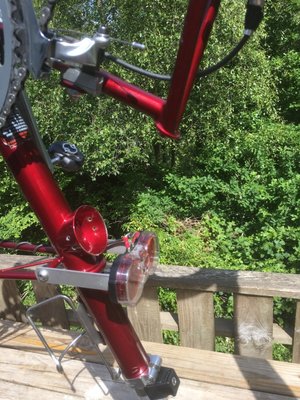