For discussions about bikes and equipment.
Post Reply
396 posts

If you tap the bushes out very carefully using a hammer and drift then you should be able to turn and refit.
I have done so in the past and just taken off the slight burrs that the drift leaves with a small round file.

Also you can purchase bushes on their own from Moulton. You don't have to buy the full service kit if the sleeve and bolt are ok. Again I did this with the last set of bushes I replaced in the tsr.
I still think any increased wear is due to the location of the pivot on the tsr and that the bushes are a fair bit shorter than on an apb. I reckon that increases the rate of wear once fractional wear occurs. It's possible that regular injection of grease takes up that fractional wear enough to prolong the life. This is largely a guess as I'm not an engineer.
Top

Mick F wrote:Thanks for the maths!
I've forgotten it all, and it seems difficult for me nowadays....

did you forget that I calculated 2.6 degrees for 10mm movement upthread? Samuel and I are in agreement. My point was, I suppose, that 10mm movement might be as much as you might expect and it is still a very small angle indeed.

BTW that the free play disappears with 45 degree movement suggests that there is one or both of two things happening;

Brucey:
I asked for the maths.
You just gave an answer.

I very much doubt the spindle is worn. It hadn't worn when I originally renewed the bushes, so it'll be the bushes that have gone oval.
I'll be pulling it apart after breakfast this morning and I'll mark the bushes, remove them, then re-insert at 45degs so they will be in the same position as when I lifted (bike upside down) the rear end and the play disappeared.

If it hasn't gone then, it'll be the spindle gone oval and I've just been unlucky. Remove the rear end again and rotate the spindle 45degs and it should then be fine.

I took the bushes out ................
With the rear end off the bike, I injected grease into the nipple and squeezed, and one of the bushes came out.
Then, I used a half-inch three-eighths drive socket with a short extension to hammer out the other one. No damage to the internal face as the socket was a good neat fit. I used a soft mallet to knock it out.

Prior to removing the bushes, I used an automatic centre-punch set quite low and made a pop mark on each vertically downward of the seat tube. When replacing them I rotated them 45degs from where they came out rotated "backwards" with respect to the way the wheels turn.
I didn't check if they were replaced left-for-right as it was pointless IMHO. I never checked the spindle either for the same reason.

Suffice to say, after an hour's work, all play has gone and it feels as good as new.

As a job, I would highly recommend TSR owners do this annually. You never know, I could turn them next time 90deg so they are 45deg forwards. It could possibly be ok, and if not, try another 45deg.

As a reminder, the spindle is STILL the original spindle. When I bought the kit back in Jan 2018 I never fitted the new spindle as there seemed nothing wrong with the old one. Had I known what I know now, I wouldn't have bought anything.

I wrecked the old bushes when I took them out as I used a flat screwdriver on both, so they are of no use now.

Didn't photograph the centre-popped bushes, but I've done one of the old ones to show. 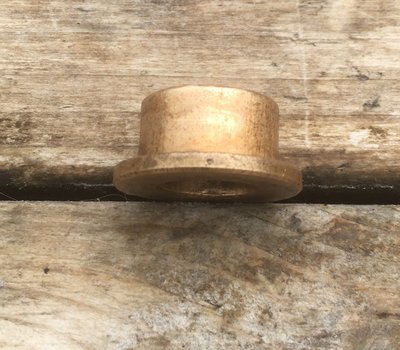 Another thought and sort of fact?

I said before, that it softens the vibrations, but that's all it does. Maybe 5 or 10mm of saddle movement on the road.
Mick F. Cornwall
Top

Just an expensive gimmick by the sounds of it then Mick F?
Top

I wouldn't put it that bluntly, and I don't quite agree.
It's a bit cheap and nasty of a design, so that makes it expensive in the long-run to maintain it.

The rear rubber cone is held in place with two pairs of self-tappers.

This was noticed by me right at the time when I was buying the bike, but at that time I didn't know I'd be taking if off every year or so. They screw into a thin circle of metal which is bonded onto the rubber. Each time they are unscrewed and put back, the holes they go into get worn and bigger. A few more times, and they'll need bigger self-tappers. 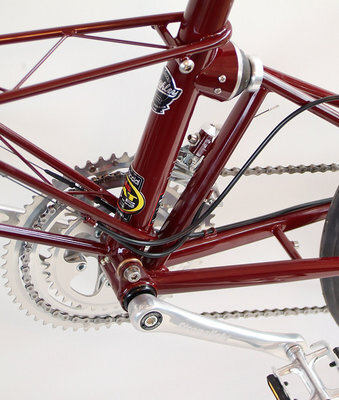 The bronze bushes are too small by half. Instead of half-inch ones, they should have been an inch and they would have taken the wear and the strain better.
Mick F. Cornwall
Top

re the 'total suspension' vs the suspension built into the frame. For some years I have owned a Moots YBB-SL MTB. This is a soft-tail design, i.e. with a (pivotless, relying on chainstay flex) rear suspension built into the frame, which gives about 1" of wheel travel. However in addition to this the tyre squishes, the seat pin is highly flexible thin-walled Ti (Moots again) and the saddle rails (Moots branded serfas) are flexible Ti too. The result of all this is that the back of the saddle will go down about 3-1/2" in total. The spring/damping rates are different for each element, so each contributes to the whole in a different way.

The above is an extreme example of course but all bikes have several things which contribute to what your backside feels.

BTW the self tappers which retain the cone on TSR and APB models are not uniformly spaced; IIRC the holes in the cone are drilled in situ to suit the frame in question. On most APBs I have worked on the cone only goes back in one way, whereas if the holes were spaced uniformly it ought to be two.

Did you keep one of those old trampoline springs?
Maybe you could cut one in half and use that instead of that rubber doorstop design?

that it softens the vibrations, but that's all it does.

...but that's all it's intended to do, isn't it?
BTW, just collected my rear triangle from Argos, and popped it back on the rest of the TSR - perfect colour match. They've chased all the threads, too - nice people.

That's exactly what I did with some of my F frame Moultons, decent quality s/s self-tappers being so readily available on fleabay.
(rides: Brompton nano & ever-changing Moultons)
Top

Yes, the holes in the frame and in the rubber cone for the self-tappers are all drilled in situ, so it won't go in 180 out or even anyway up into another TSR. Trial and error to refit into your bike ........ but last time mine was out, I put a felt pen mark on it to show the top.
If you bought a new one, it must come undrilled.

Those trampoline springs eventually went to the metals skip at the recycling yard, as I couldn't think of a use for them.

As for "softening the vibrations" it depends on the degree. My experiment in compression yesterday had the saddle going down 50mm, but maybe 5mm (10%) of that was the tyre being squashed. I wish I'd measured it as I saw it well squidged. 28mm at 100psi unloaded.

I put a felt pen mark on it to show the top.

I put a felt pen mark on it to show the top.

The thing that gets to me about this, is why it has to be like this?

It's bad enough that they use self tappers, but why can't the frame drillings be standardised?
The cup that's brazed onto the seatpost can be made separately and constantly as a complete item.
Braze it on, and Bob's your uncle. The holes will be consistent for each and every bike.
Mick F. Cornwall
Top

I know - they're a little bit "cottage industry". We'll have to ask that man who knows...
I just finished throwing mine together, and whizzed round the block. All good except the front mech.s not very smooth up onto the larger ring yet. I'll try again tomorrow and take some piccies - it does looks Good.

I'm off on mine in the next hour. Not far, just a quick 20miler.
It'll be interesting to see how it feels with the play gone. When I fitted new bushes, I commented at the time how the bike felt "more together".
I'll test to see if the play has returned after I get back.

Was thinking earlier, that maybe the bushes wear "egg shaped" rather than oval.
When the bike is in use, the pivot is the thing that stops the bike from spreading front/rear ............... like if you removed the pivot bolt and then sat on the bike, the frame parts would immediately hit the deck hinging on the rubber cone.

This means that the bushes wear rearwards due to weight .............. and the top, bottom and front of the bushes would be relatively unworn.