For discussions about bikes and equipment.
Post Reply
393 posts

Not quite, but there's lots of stuff up there.
One day, we'll pop our clogs, and people are going to have to empty it!

Do you know, that we have every single letter we ever wrote to each other in boxes in the loft.
We met in Jan 1972 when I was in the RN, married in late 1973 and served until 1996. Lots of time away, and letters back and forth, so we have hundreds of them.

Mercian spent some time up there too. Maybe three or four years lying on its side pining for the fiords.
Mick F. Cornwall
Top

Has the Moulton been up there Mick F?
Top

No, not yet, but don't tempt me!
Mick F. Cornwall
Top

I served a full apprenticeship in the RN and specialised in electronics, but there was a major part of the training in the workshops.
Fitting with hand tools down to 1.5thou, turning jobs down to 1thou plus screw threading and taper fittings. Milling, and dividing heads for angles ......... loads of stuff.

You lost marks for inaccuracies and gained marks for exacts. If you got a good mark, you kept your workpiece. I kept all mine, and still have the vast majority of them. Sitting in a plastic container with oily rags round them, and just up in the loft ......... and I've kept them all since 1972/3 ............... so I must get them down and have a good look at them again.

It's quite amazing the accuracy you can achieve with files and scrapers. Very underrated tools.

Get them down from the loft and post some photos

Ok.
Next time I'm up there I'll bring 'em down.
Been meaning to do it for yonks.

Down at the pub some few years ago, a few of us would do a "show and tell" presentation.
I've taken my 1877 French bayonet like this one:
http://www.rustyoldarms.co.uk/recently- ... ntry-rifle
Long story how I got it, but our grandfather gave it to our mum circa 1962. Been in the family since, and it ended up with me.

Also, one of my apprentice pieces is an oscilloscope which I took down. We made our own mains transformer with secondary windings for 6.3vac for the valve heaters, 500vdc for the HT circuit, and 15Kv (?) for the oscilloscope tube anode.
We made the aluminium chassis and mountings did all our own wiring and connections, made and engraved a front panel and manufactured plastic control knobs.

Get them down from the loft and post some photos

Do - I'd be interested. Employ the macro feature on your camera, too

It may be a day or three before I get round to it, but I will.

Also, a hand filing job with a brass square that has to go in a steel square all four ways, both ways = eight ways all within 1.5thou.
There's another with a steel block that slots in bigger bigger steel block that has to fit eight ways too.
Plus a mixture of milling, turning and hand tools job, plus another with a cam and a sliding taper on a crank.
Mick F. Cornwall
Top

You be careful getting up into your attic Mick F, have you got a proper loft-ladder?
Top

Of course we have.
Haven't you?
Mick F. Cornwall
Top

Hi,
So Mick is a master Turner as well as a radio knob Turner

or was that tuner

A tough one Mick, without looking, there are four ways to produce a taper on a lathe?
Sorry Mick

Let's see your metalwork tests from the loft.
all mine have gone although I think I still have the toolbox.
Funny I still have some of my school metalwork stuff but not the latest stuff.
NA Thinks Just End 2 End Return + Bivvy
You'll Still Find Me At The Top Of A Hill
Please forgive the poor Grammar I blame it on my mobile and phat thinkers.
Top

I have only one metalwork job left.
Found it the other day.

I have an O Level in Engineering Workshop Theory and Practice.

These are a pair of trammels. Made in late '68 or early '69.
All hand made. Long sliding taper, two identical pieces made from three plates countersunk rivets, and the pointers are silver soldered into them. A couple of turned brass knobs and knurled. It is about a foot long. 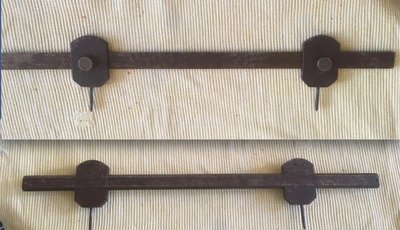 You had to hang on to all your marking out stuff at our place otherwise it would walk off and turn up years later all rusty.

Update on the pivot issue.
Summary of the story so far.

The new kit arrived and I found the spindle wasn't worn, so I still have the brand new spindle. As a kit, you don't need a spindle or even a bolt as the existing ones will be fine.

New bushes went in, and have eventually worn, but by rotating them 45degs in the housing, the play has gone proving that the bushes only wear ovally.
How many times they can be rotated to remove the play, I don't know as yet. At a guess, another once, but another twice is doubtful but not out of the question.

Meanwhile, I bought a pair of bushes from Simply Bearings for six quid odd but their flanges are too thick.
It's possible to file them down, but a lathe would be simpler and quicker.

My mate's father has a lathe, and he did the job with my two SB bushes to get the flanges down to the correct thickness. I gave him one of the old ones to measure the flange and picked them up this afternoon. 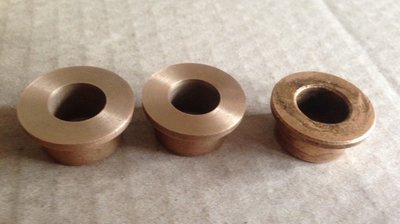 Don't jump at this as yet.
Wait for my report.
Mick F. Cornwall
Top

The part-worn ones came out as I'd done before ......... remove the rear triangle and inject grease through the nipple, and one of the bushes will be forced out. Pull out the spindle and remove the grease nipple as the inside fouls the a half-inch socket and extension to pass through the frame, to tap the other one out.

All ok so far.

Tried to fit the new modified bushes, but they were the very devil to get in. I had hoped to use a soft mallet.
No doubt these bushes aren't always spot on machined in diameter.

In the end, I used a threaded bar with nuts and washers to wind them in like you would do with headset races. Both went in fine.
Pushed in the spindle, re-fitted the nipple and injected grease in the hope that one of the new bushes would move. Sadly, both solid as a rock.

Perhaps not sadly really, as they are better being in tight. Sadly, because I wanted to re-fit the part ones, and now I can't get the new ones out so easily, so I'll leave them in and cross the bridge of removing them when the time comes.

One issue there is with the grease nipple, is because it fits on a small radius of the frame, it doesn't seal very well. I use a copper washer, but because the nipple has been on and off a few times, the copper washer is a bit "tired" so the grease under pressure from the gun seeps out from the nipple threads. I'm going to see if I have another copper washer, and maybe use PTFE tape.

Poor design - yet again.
All it would have needed was to have a "flat" on the frame tube so the nipple fits properly.

thanks for the updates, Mick. An icy thought is creeping down my spine, ie the number of times the bronze bushes come in and out, or round about, in the steel shell must be making wear of itself...
byyeee,
SiE
Top
Post Reply
393 posts