by RichardPH
I purchased an Aldi 2-stage pump today. Feel a little stupid because I can't see any way for it to accommodate a presta style valve without the pressure tube blowing out of the adaptor. The instructions have tiny diagrams that offer little in the way of guidance.

Has anyone bought one and worked it out?

by RichardPH
OK, I understand now. Unless you have one, the explanation won't make it clearer... but the problem is that they rely on a round internal snap ring to retain the pressure tube, trouble is, the groove into which it fits is inadequate depth and at quite a low pressure it simply unseats and allows the tube to blow out.

Shame really because the rest of the pump seems a good design, two stage, lockable high pressure stage and a gauge. So close and yet so far. It may be possible to modify for Presta valve exclusively, that I shall investigate shortly.

by mjr
Not bought one (I've too many pumps already and a nominal pressure of 80 makes it useless for my road bike's back tyre) but https://www.aldi.co.uk/bikemate-mini-bi ... 0205419800 makes me think either it's one of those nozzles that you unscrew, flip around and reattach the other way (some Zefal pumps and the Z-hose do that) or possibly one that has a second inner screw thread for Presta well inside the nozzle, but an inner thread seems unlikely to be compatible wtih Dunlop so I think it's probably the flip around sort.

If you can post close-up pictures of the nozzle and inside it, we might be able to make a better guess.

by RichardPH
Thanks for the suggestion mjr, but the problem lies with the snap ring, no question. Think it might be possible to cut off the feature for the Dunlop valve and use the screw thread to hold it together. It was only a fiver so little will be lost.

The high pressure stage goes up to 120psi BTW... it's the high volume feature that only goes up to 80psi. Handy to have both in one pump on the bike, which is why I'm going to persevere.

by mjr
I can see what you mean - I like having both available, but I don't mind carrying an adapter for the rarer Schraders I use/meet.

I'd still be interested in pictures as I can't quite understand how it's meant to work.

by Jeff31
If it is the little pump I was looking at it appeared that the chuck takes shraeder valves as standard but by unscrewing/sliding the two halves of the chuck it extends to leave a hole long enough to accommodate a presta valve. Think trombone. Hope this makes sense. Jeff

by Annoying Twit
Because of the little pressure gauge, I'd be interested if the pump was OK. I'd like to hear if you manage to make it work well in practise.

Never done a photo insert before so hoping this will work out...

I decided that since it's the internal snap ring that's failing in its duty, perhaps the best plan is to help it by potting with epoxy resin in the presta valve position. This will prevent the ring from bending and popping out of its shallow groove [I hope]. Will post a pic of the final result when it's set properly.

Longer term of course, who knows?

by RichardPH
OK. In between the last post and this one, I separated the rubber tube from the bayonet fitting, see photo 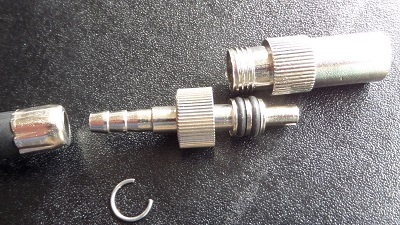 Then I drilled the nut 5,5mm so that it would fit over the main tube. The snap ring and nut must fitted and the bayonet pushed back into the rubber tube, see photo below 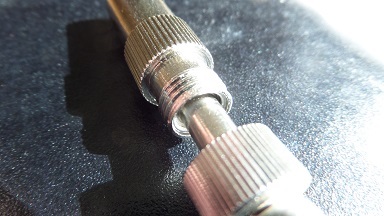 Then the epoxy was added 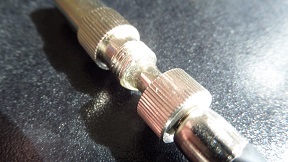 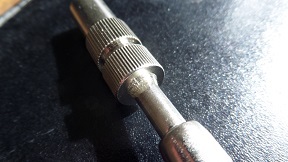 by Antbrewer
Hi Richard,
My comment won't necessarily help you but it might be of interest.
Whilst in Australia visiting my daughter this April we went into Aldi to shop and as usual I look at the 'other stuff' while my wife and daughter shop for food.
Low and behold it was cycling stuff and there was the pump with the gauge on the end. Hadn't seen one in England so I bought it for $10.00. When I tried it at home it was hopeless on the presta valve. The instructions were so small as to be useless. So I thought '$10 down the drain. I then found in our local Aldi identical cycling stuff with the pumps. On careful viewing it was obvious that the Australian connection was faulty and came apart whereas the English one didn't. I carefully repacked the Australian pump in the English packing. I know that was wrong perhaps but it is the same company. I then took it back and said I wanted a replacement as it was faulty. The English one was £ 4.99 I believe so the Australian pump was not only faulty but a couple of pounds more ! The English one works fine on both Presta and Shrader as I have two bikes with both systems.

So maybe a faulty batch was wide world and not just Australia.
Anthony
All times are UTC
Page 1 of 1
Powered by phpBB® Forum Software © phpBB Limited
https://www.phpbb.com/