Does anybody have any experience of high end step through frames - Mercian. Bob Jackson etc. I see that Bob Jackson still list them but Mercian appear to have discontinued theirs.
My wife has noticed the very significant weight difference between my Pilgrim Audax bike and her Trek. She has also intimated that a return to a step through frame in place of a "mans" frame - might be welcome.
Much of the comment on the web suggests that step throughs are not really stiff enough to be "proper bikes" and can have a mind of their own, especially if ridden out of the saddle or loaded with panniers. My experience riding her previous Raleigh mixte frame would appear to confirm this. It might as well have been made from rubber. But I guess it was made of low quality tubing.

As she never rides out of the saddle - but we do tour occasionally - is the lack of stiffness really an issue. I invite your comments and informed opinion.
Top

Ladie's frames typically suffer from reduced stiffness vs a traditional diamond frame. The biggest problem (IMHO) is reduced torsional stiffness; this manifests itself as distinct whippyness when pedalling hard and a loaded bike can practically tie itself in knots which can be very alarming.

Most mixte frames have twin lateral tubes that extend from the upper head lug to the rear dropouts. This design gives adequate vertical stiffness and an exceptionally comfortable ride (because there is effectively only one large diameter tube resisting the bending moment from the forks) but this is accompanied by rather poor torsional stiffness (unless the down tube is greatly oversized). The stepover height is higher than in some other designs. If you hit a brick wall (or even just use the brakes hard in some cases) the frame will soon bend just below the lower head lug.

Arguably the best ladies frame design is this one;

which was made by Claud Butler in the 1950s. This has the stepover height of a mixte frame with considerably improved torsional stiffness, by virtue of the conventional sized upper down tube. It isn't likely to be quite as comfortable to ride as a conventional mixte frame. It still transfers loads into the middle of the seat tube but the rear stays brace this area. If the seat tube is built in a slightly heavier gauge than normal, I think this frame design can be reasonably stiff, torsionally speaking. Weight-wise this frame is a little bit heavier than a gent's frame, by virtue of added weight in the gauge of the seat tube and the extra stays, of course.

Any competent framebuilder should be capable of making a frame to this pattern, but it may require cut and welded lugs (or lugless construction) since lugs are not commonly available in the angles required for the upper down tube.

A mixte frame isn't really a step through. Some modern frames, especially if they do a smaller size, have a stepover height not much higher than a mixte frame. Speaking as a man - no understanding of the issues - then unless the rider wants to wear a skirt, I'm at a loss to see what's gained by a mixte frame. I imagine that if you went to a 100% bespoke builder, they'd build a frame to whatever spec you wanted, but if you went somewhere that had various models that you could have built to the right size with your own braze-on requirements, then a mixte model wouldn't be top-end. Thinking about it, I could imagine a big issue being the availability of lightweight tubesets and lugs

I've no experience, but if you're talking high end and step through then the first brand that pops into my head is Moulton.
Top

Pretty sure Mercian will make you one on request. Elegant though mixtes are, they're unavoidably flexy, as they don't have the torsional resistance of a diamond frame. A step-through frame with a dropped top tube is better; if you're going to use it for loaded touring, extra mixte-style lateral stays in the rear triangle will help stiffen the back end a bit, but I don't know whether anyone offers these frames OTP. I'd have thought an experienced custom builder would see you right - apart from Mercian and Bob Jackson there's Woodrup, Dave Yates, Keith Vaz, Geoff Roberts, and others. 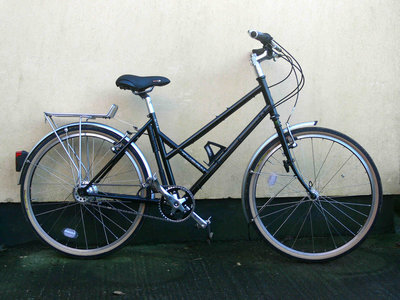 Not a billion miles from Norfolk are "Lifecycle" in Bildeston, Suffolk. My other half has a Cicle Barco from them, similar to the blue example on their website (link below). Can be built with just about any components. Our example is a different colour, carbon forks and 1.25 headset, 160mm cranks, 2x11 gear train, flat curved back handlebars (rather than the butterfly pictured). Downside was cost (quite a lot, but if talking Mercian that's not an immediate block) and delivery time (frame took an age to arrive from Italy). Intended use is light day rides, or light weight touring to stay in hotels/guesthouses/etc. Small panniers are the most it will ever be expected to carry.

Alternatively, a friend of mine recently picked up a Mixte Dawes frame from the early 1980's which he's planning to build up to use period components, but keep the weight down.

In terms of step-over height, I doubt there's much between a Mixte and a modern small "compact" frame. But it looks different, particularly with curved "flat" handlebars, rather than the drops of "racer" derived bikes.


I think the stiffness arguments only really come to the fore with either heavy or very powerful riders, or very heavy touring loads. For a lighter and/or slower (no sporting) rider, I doubt they make a massive difference.

Nigel wrote: ...In terms of step-over height, I doubt there's much between a Mixte and a modern small "compact" frame...

the orange CB in the picture above has the same stepover height as an ~11" (C-T) compact frame. If this isn't low enough then the upper down tube can be curved and made to intersect the seat tube lower down.

A point worth bearing in mind is that the provisions for mounting a rear rack on a small compact geometry frameset are poor (eg leaving you with ~10" long front stays on the rack), whereas on the CB design the rack provisions are excellent. 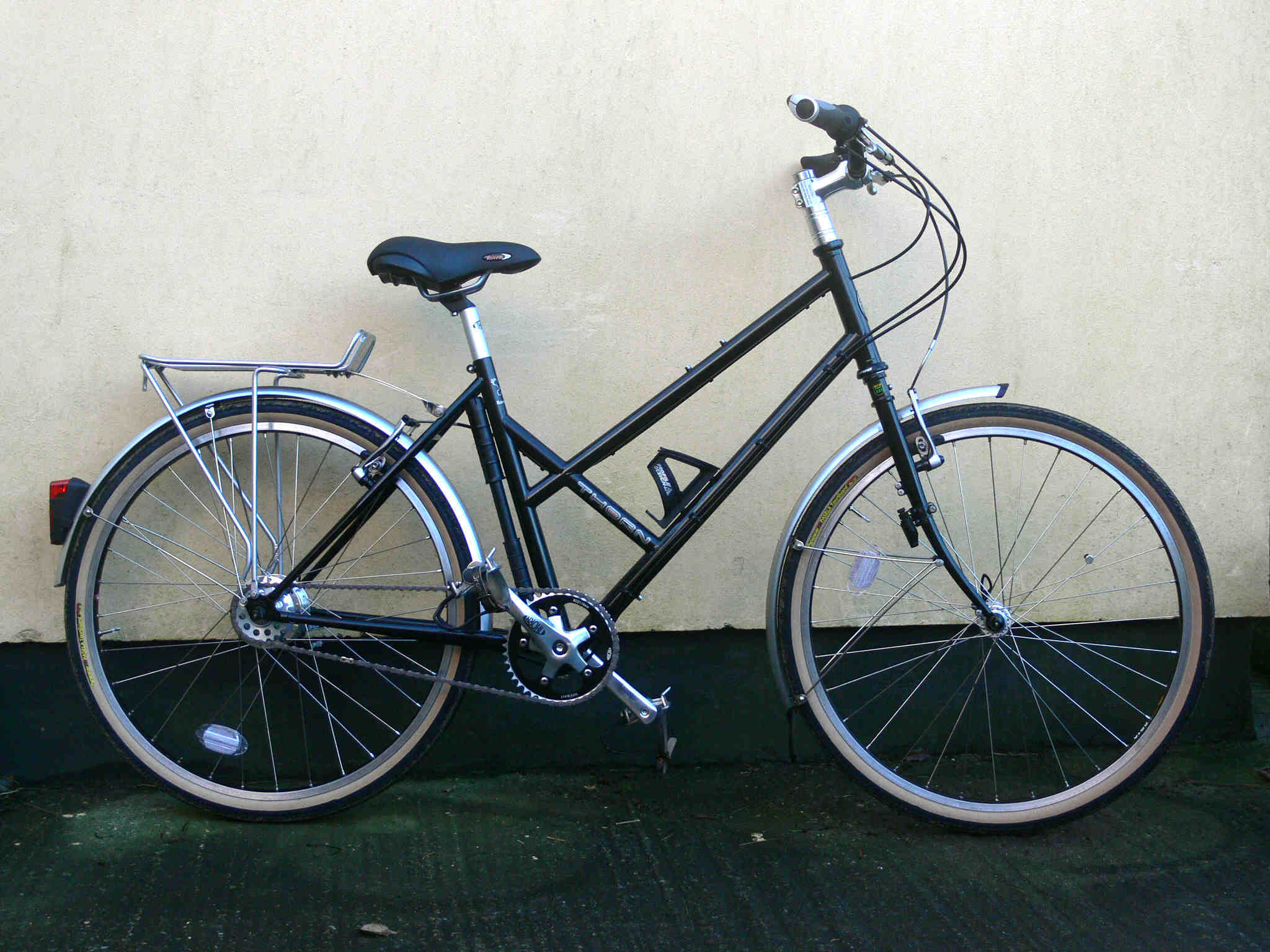 It is alright that; a little bit similar to a raleigh cross-frame in some respects.

I don't doubt that the frame is pretty stiff; it appears to be built using oversize tubing.

Glad to have the Oracle's blessing on that then.

Rivbike on one end of the spectrum. On the other end there's a decent 650b step-through that was reviewed in the last issue of Cycle, which you can get from Evans.
If I had a baby elephant I would let it sleep in the garage in place of the car. If I had either a garage or a car. (I miss sigs about baby elephants)
Top

mark a. wrote:I've no experience, but if you're talking high end and step through then the first brand that pops into my head is Moulton.

I have a Moulton (TSR), and it's easy to step over and the space frame construction makes it incredibly stiff (but the suspension means comfortable). Not as light as carbon fibre confections, but not ridiculously heavy and IMHO a delight to ride.

Both http://www.svencycles.com and http://www.beaumontbicycle.com make step-through frames and I believe they're both showing at this weekend's York Rally. So, if you're in the area...
Top

FWIW the orange CB frameset in the picture is unlikely to be much in excess of 6-1/2 lbs, will be joyful to ride unladen, and will probably be OK with a touring load up to ~15-20lbs or so. 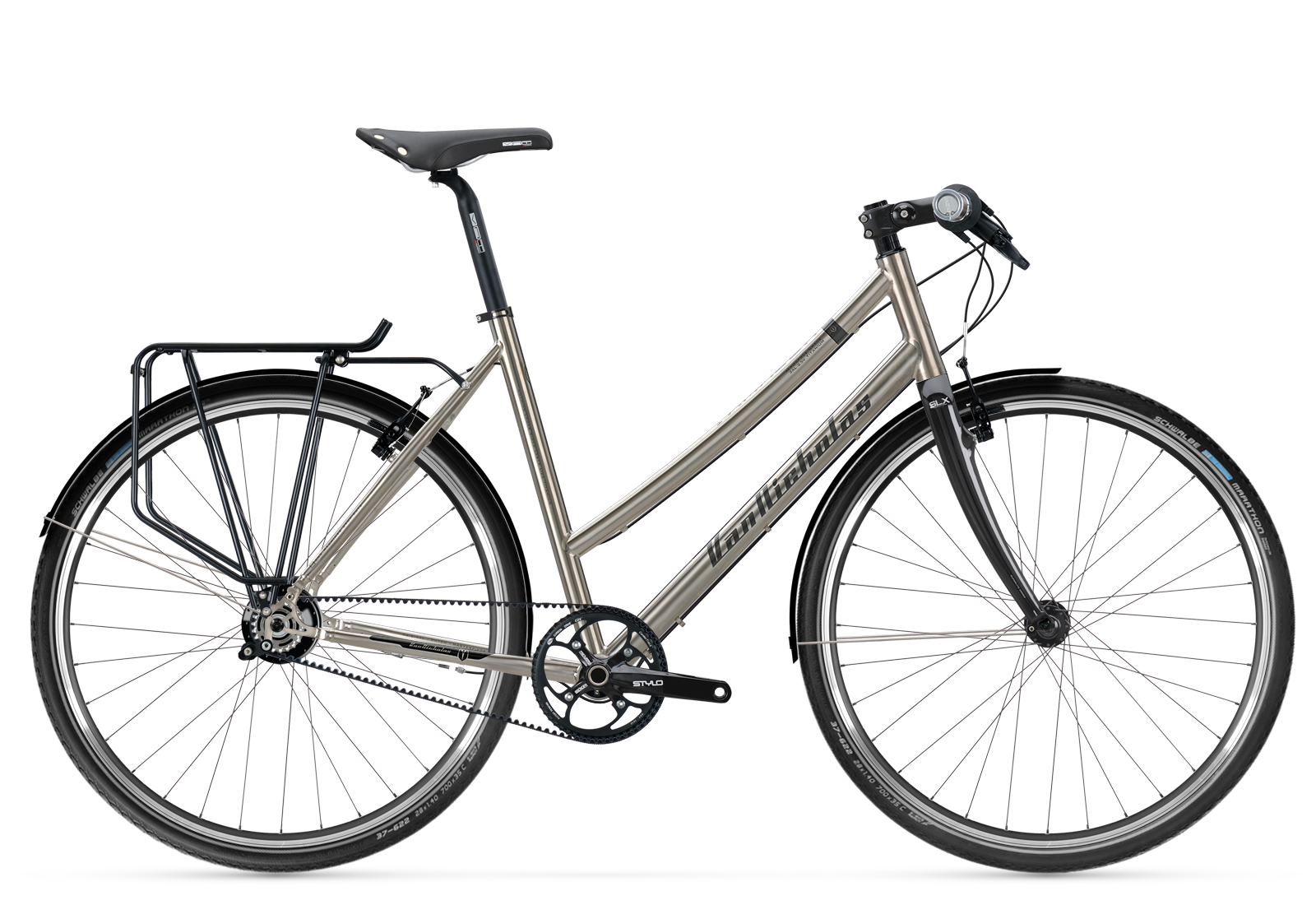