I have an old Trek 830 MTB which because of knee problems I successfully converted to front wheel electric hub assisted drive last year. However, I find the front cantilever brakes do not work well with the new 26" wheel / are difficult to adjust in order to take account of the wheel being set to one side to accommodate the hub motor. If possible I would therefore like to change the front brakes to disc.

1. Is this possible + how? This is an old frame and has no boss on which to fit the disc brake itself but seems to have the necessary x6 holes for the disc itself on the hub (see photo)

2. Can anybody recommend a suitable + reasonably priced disc and brake for such a situation? I'd like to continue using the existing brake lever + integrated finger operated gears, which I presume means mechanical / cable operated disc brakes, which would also be my preference?[/list]

I have no experience of disc brakes and this may be a non starter but would be a great refinement to the new bike set-up if possible; I intend to leave the rear cantilever brakes for the time being as they work fine. 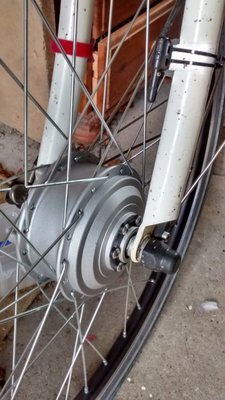 the fork is best replaced with one that has a disc mount. This is easy enough if the steerer is 1-1/8" but less easy if it is 1" sized.

Some forks are strong enough to have a disc mount added or to carry a hub motor but not so often both. The hub motor imposes much greater stresses (and fatigue loads) on the fork simply by virtue of its weight, leave alone any torque reaction.

For a brake I suggest a good quality mechanical disc such as a BB7.

The wheel rim should not be 'offset' in the forks; this means the spacers are set wrongly and/or the wheel is not well built. Looking at your photo I'd suggest that the spacing is certainly not quite correct but that may not be the full extent of the problems.

I also note that I don't see a torque reaction arm (TRA) for the motor. If you don't have one at all then this should be rectified. Having seen more than my fair share of other people's cock-ups I usually advise folk to fit two TRAs i.e. one each side if possible.

If your motor doesn't have the option to add a disk on the hub you would need a completely new build motor wheel, as well as new brakes and new forks.
Might be easier to simply get a rebuild/redish of the front wheel?
If I had a baby elephant I would let it sleep in the garage in place of the car. If I had either a garage or a car. (I miss sigs about baby elephants)
Top

Brucey has it covered, you will need to change the fork for one ideally with a post to post mount and a steel fork if at all possible then you don't need to fit a T/A.
The hub is disc ready and at least one T/A is needed ideally two for Ali forks, even with these fitted the drops out will most likely fracture at some point. The saving grace is the T/A's should save you from a face plant.


I had a 8fun BPM in a 26" Rockshock Reba with T/A's and the drops outs both cracked purely because the D/O's weren't meaty enough. My answer was to use Suntour 700c forks with a nice meaty drop out and a pair of bespoke home made T/A' s, the fork afforded me more mud clearance between tyre and bridge.
Top

Thanks for the thoughts - pity I hoped I could get away with the existing forks but no surprised really - maybe I can get the cantis better set-up?

Does the fork geometry matter as my current forks are slightly curved and most of what I can see are straight + can I use suspension forks instead?

I haven't checked sizing yet. This is a fairly old bike that's seen good service & built like a tank.

I may get back to the supplier just to check this will be OK with a disc too - Cyclotricity via Electric Bike Conversions.

With this kit there is a torque washer which fits inside the dropouts (see below) which In presumed served the same function as TRA on a rear wheel conversion?

you can get a set of SH suspension forks probably cheaper than regular ones.

a bit of jiggery pokery by nothing you couldn't probably do yourself.
Top

No-turn washers (NTWs) are used with hub gears. These are normally used in pairs, i.e. are fitted to both sides of the hub, and engage with the (relatively chunky) rear dropouts. Because of the way IGHs work, the NTWs normally see a fraction of the torque that the hub sees.

By contrast (depending on how it is configured internally) a wheel motor will react up to the full torque of the motor into the NTWs/TRAs and if NTWs alone are used, this load is reacted into the (relatively flimsy) front dropouts, which are hardly ever properly designed with these loads in mind. These dropouts also see very large loads from disc brakes if they are used. The MTB world has moved on to through-axles in good part because as standard QR is not 100% reliable if it is asked to restrain a wheel under disc brake forces. The LH dropout on suspension forks quite commonly wears or breaks off if a disc brake is routinely used with enthusiasm. The lowers on suspension forks are either made from cast aluminium (brittle) or magnesium (weak and brittle). They certainly don't last forever even when used as intended and strapping a wheel motor into them is basically asking for trouble; the loads are not larger necessarily (although they might be if NTWs alone are used) but they are there all the time, not just the small fraction of the time when you are using the brakes hard.

In the town I live in there are various people selling/fitting electric conversions and (IMHO) basically some of them shouldn't be doing it; there is a steady stream of people who go to other LBSs having had nothing but trouble with their motor conversions and the commonest problem seen is that a front wheel motor is mounted badly in a fork that isn't really strong enough for the job. In some cases the motor vendors have fitted them like this, in other cases they have said 'it will probably be alright' when selling a conversion. How it is that more people have not been seriously injured or worse is a mystery to me.

My advice (in a nutshell) is to

- buy a fork that is designed to accept a wheel motor
- failing that buy the strongest steel fork that will fit into your frame
- do not assume that a suspension fork will be strong enough to accept a motor; it probably won't be
- do not use NTWs alone; use TRAs, and make them as long as possible eg by welding extensions to them; twice as long = half the load
- remember that the torque reaction increases with both wheel size and motor power.
- remember that just strapping heavy wheel motor into a bike very greatly increases the fatigue loadings in the frame and fork.

If in doubt look at bikes from reputable manufacturers sold with similar arrangements of motors in, and consult with dealers who sell these.

In regular use, check the fork for cracks etc often. Check that all the nuts and bolts securing the wheel and the TRAs are secure on a weekly basis.

Could you fit a v brake or Magura rim brake in place of the canti? Either is likely to be much more powerful than the canti and probably as good as a cable disc.
Top

the_twin wrote:Could you fit a v brake or Magura rim brake in place of the canti? Either is likely to be much more powerful than the canti and probably as good as a cable disc.

Don't know but will take a look. Thanks.
https://roundthebendpart1.wordpress.com/
Top

The HS 33 Magura are indeed excellent brakes but IME they need a strong hand if sustained use is expected.
If updating the rim brake power it's important you check the condition of the rim sidewalls for wear and I would only be happy to use them on a box section rim, not a U section.
Current status report:
Back on two wheels in deepest Pastyland and loving every minute. Mission: to enjoy big, bad hills again.
Top

Plan-B (provisional) like the idea of V-brake - simpler and cheaper.

What do In need to consider to ensure fitting e.g. how do I ensure the brake blocks will along with the rim - I presume some form of drop distance? + will the boss fittings be standard and work for V-brakes as well as cantis? + anything else?
https://roundthebendpart1.wordpress.com/
Top

The bosses should be in the correct position already - every mountain biker probably did this conversion when V brakes came out, so lots of descriptions out there on the web. You can slide brake blocks up and down and pack with spacers to get the correct setup. You need to make sure you have enough clearance for your mudguards - unlikely to be a problem unless they are absolutely massive. You will need a new brake lever as a canti one has the wrong pull ratio.
Top

V brake is a good plan but I'd suggest that the wheel needs sorting out first, esp if the rim is presently not centred in the fork, and there is any doubt regarding the TRA arrangements.

BTW boss separation needs to be ~80-83mm for most V brakes. Pretty much all MTBs used this boss spacing well before V brakes were available, but some machines (such as touring bikes) used narrower boss spacing which was an older standard. I don't think it will be a problem but it is as well to check the boss spacing before getting another brake.

Thanks, sounds good. Provisional measurements suggest it will work - thinking of these: