I have a Campag Zonda rear wheel with a Campag 11-speed cassette. Contributors to some forums reckon this will just work with a Shimano 11-speed groupset. Others say not and that it isn't just as simple as swapping the cassette as they have different freehubs, which are not a simple switch. I would very much appreciate any recommendations as to what is possible and, even better, what is most cost-effective.
Top

the sprocket spacing is different between campag and shimano 11s. If you are not too fussy about shift quality it may work well enough, but it won't work perfectly unless the spacers are made slightly thinner.

You can buy shimano-splined freewheel bodies for your wheels but they are not cheap.

Thank you Brucey, would there be any risk involved (apart from disappointment) in giving it a go?
Top

Despite the small differences between Campag and Shimano many people regard 11 speed as interchangeable. If it possible why not try it out? Might need a touch of indexing but it might work. I have found that many slight theoretical issues can be overcome to a great extent. Little things like a touch of play in the jockey wheels can help here. Of course for you it may not work but I would try the mix before spending money.
Top

If you've got the parts on hand, I would definitely try it. Check your limit screws etc carefully but it's not going to catch fire!
Top

MarkFHarrison wrote:Thank you Brucey, would there be any risk involved (apart from disappointment) in giving it a go?

not really; the only thing is that if the top pulley is as far sideways as it can go in normal running (because it doesn't really line up with the sprocket) then the pulley teeth and the pulley bushing covers tend to wear; I have seen them wear right through in fact.

http://www.cornant.uk scroll down to cycle technical notes then open rear derailleurs and indexing, here you should get some useful information on indexing.
I only have done this with 8 and 10 speed it really is not difficult. I have 3 bikes and one upright trike with 10 speed working as good as any matched components. You probably need to move the cable so that it exits the fixing bolt about half way between normal cable position and centre of bolt
Do not move the cable to much as it will over or under index.
Don't be put off going for it by to much advice. I also recon that those who claim it indexes correctly out of the box are probably not locating the cable correctly on the derailleur for matched component indexing so it works with a mismatch. 10 speed does not index well without moving the cable away from the bolt, that is with campag levers and sram cassettes
Someone did point out that Sheldons site has similar advice on it.
Top

If the campag cassette doesn't play very well with Shimano you could try using Shimano 11sp spacers from old 11sp cassettes in place of the campag ones. You just file the tops of the through rivets to split the cassette. You may need to use more than one old cassette as quite a few sprockets have integral spacers or aluminium spider. You might need to pack behind the cassette to get the lock ring to fully tighten. It might not be perfect but might make enough difference.
I've not tried this with 11sp but I run a 9sp Shimano cassette with campag shifters and mech. I replaced most of the spacers with campag 9sp and it shifts faultlessly.
Top

Excuse me if I'm incorrect but isnt the spacing on 11spd cassettes identical so the neutral service motorbikes only have to carry one style of wheel ?
Top

fishfright wrote:Excuse me if I'm incorrect but isnt the spacing on 11spd cassettes identical so the neutral service motorbikes only have to carry one style of wheel ?

They're not quite the same but very close, Campagnolo spacers for 11sp are of variable thickness. They are close enough not to cause problems in most cases according to this article -

Many thanks for all the great advice. As my Zonda wheels on my broken frame are much nicer than the standard Fulcrums I will definitely give it a go and report back.
Top

I removed my 11-speed Shimano Fulcrum and replaced it with the Athena equipped Zonda. It worked without any adjustment and I cannot detect any difference whatsoever; apart from the fact that the Zondas roll better. Thank you all for the advice. It saved me several years' Cycling UK subscription right there 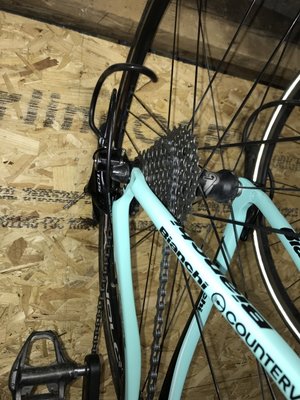 According to Wiki' there is only a difference of 0.11 mm between Campag' and Shimano 11 speed sprocket pitch.
So 1.1 mm more movement over the full range of sprockets for Campag' over Shimano.
So should be no problems really swapping wheels. May need a very slight adjustment to align the dérailleur.
(Note this is for road versions as Shimano MTB cassettes are different to road ones.)

Assuming that Wiki' have their facts correct :-
https://en.wikibooks.org/wiki/Bicycles/ ... Dimensions
There's no such thing as a tailwind.
It's either a headwind, or you're going well.
Top

when using sprockets 1 and 11 the mech position is primarily defined by the stop screws, not the shifter. This means that the eight pitches between #2 and #10 define the maximum index error, which is 8 x 0.11mm or about 0.9mm. In reality if you centre the mech over sprocket #6 then you will get an error of about 0.45mm in 2 and between 0.45 and 0.55mm in gear 10. The reason the error in sprocket #10 is not perfectly defined is because there is just one odd spacer in a campag 11s cassette, that is between #6 and #7 (numbering the sprockets by order in which they are fitted, not the daft way campag do it) and that is 0.1mm thicker than the others.

Without very careful measurements it is difficult to say if the sprockets are truly unevenly spaced or if there is something that means that the pitch is more uniform than it appears to be. Anyway it is only 0.1mm, shouldn't be a big deal.