Trimming when on the inner of a triple (STI shifters)?

Trimming when on the inner of a triple (STI shifters)?

After thinking about it and wondering why that was, I realised that if I do the little trim click while on the inner (after loosening the cable off a bit at the inline adjuster), all of a sudden it works perfectly. As long as I remember to trim the mech on the inner chainring (bringing it outwards slightly) before shifting to the middle, it easily shifts to the middle with a full shove, while shifting from outer to middle also shifts well.

My question is why does Shimano do this stuff!

I mean why has the inner got a trim position there at all since on the inner + lowest sprocket, it barely rubs anyway?

Yes it's nice having that trim I suppose, to get no rub in the lowest gear, but it seems this cannot be setup any other way, which is odd to me, having to have it so when on the inner chainring it needs that little trim click before shifting to the middle - otherwise it just won't shift to the middle, maybe if I get lucky, with a lot of slipping beforehand.

Now with it setup this way I had to be careful it wasn't shifting all the way from the inner to the outer because I did make it do that a few times, so I again slackened off the cable a bit more and hopefully, that's alleviated that.

To be fair it's running really well now I have it set this way.

Is this really the way Shimano intended it, so the inner chainring must be trimmed before changing to the middle chainring?

Pah! That's just weird, but then I have really never used STI triples, I have been on MTB triples for a long time and those don't have trim positions.

I nearly posted in the Brucey trim thread but didn't want to clutter it up.
When two cyclists get married, they should throw anodized cable crimps instead of confetti.
Top

which shifters are you using? Is this the bike with pulley on it? What are the other bits you are using?

Brucey wrote:which shifters are you using? Is this the bike with pulley on it? What are the other bits you are using?

6510 shifters, the one I remember you pointing out doesn't have a trim on the outer whereas a lot of other STI shifters do. It does have trim on both the middle and inner. 5 positions in total.

What's clever to me about these shifters is, if you trimmed the inner or not has no bearing on how it shifts to the middle - the middle can be trimmed down slightly, regardless of the shift it 'came from'. No wonder people don't like taking them apart.

I am using it on a 48t outer and FD-6503 designed for 52t but people have said it works, it does seem to shift smooth now as long as I have it setup so the inner chainring must be trimmed, before shifting to middle.

On all triples I have used, it seems setup right when I shove the lever all the way from the granny and it rubs a lot but doesn't shift to the outer, then releasing the lever moves the FD a few mm in and it's where it should be. I realise that a while back, I guess it's a built in safety thing where a full sweep of the lever from inner to middle should never have it wanting to shift to the outer, but it should rub considerably if holding the lever fully up, before letting go.

The fact is I use the granny hardly ever, I'll just have to remember to trim it, and since I am nearly always going to be on the low sprocket if I am on the inner, the slight rubbing when it's trimmed (compared to not) will tell me, or equally, click the down shift, if it clicks it was trimmed and needs re-trimming, if it doesn't then it wasn't trimmed and does need it, before the potentially fateful shift to the middle.

Someone elsewhere said the Tiagra triple FD (for use on 50t, unlike the Ultegra that's meant for 52t I think) is a better mech, not just because it's suited to a slightly smaller outer, but he said it's also a better mech than the 105 or Ultegra, I find it hard to believe.

I once had a R443 (Tiagra? It's not branded as such but is at that same 4xx/4xxx groupset level) then I upgraded it to the R773 (Ultegra level) and the difference was huge, the R773 shifted from inner to middle miles better, the R443 felt weak/floppy in comparison.

Once these things are setup they can work like a dream but it's getting them setup.

When two cyclists get married, they should throw anodized cable crimps instead of confetti.
Top

if the chainline is not as per the chainset FD-6503 is meant to work with, and/or the cable is not routed to the FD as Mr Shimano intended, the FD shift ratio won't be correct. This will (with index front shifting) likely cause problems with either the bottom to middle shift or the middle to top shift.

By contrast if the chainrings are a few teeth smaller (but the intervals between them are comparable) to those intended, this is usually no big deal.

The way the trim clicks are arranged essentially implies that shimano expect you to be running somewhat cross-chained on the inner chainring before you shift to the middle, and that when you shift off the big ring to the middle you double-shift, again ending up on one of the middle/smaller sprockets at the back. This (as you point out) in both cases leaves you with a few downshifts in hand on the middle ring which can be accommodated using the trim click.

22T inner sounds like an MTB chainset. Have you got the correct chainline? Is the chainring spacing an issue? I've used 48/38/28 on FDs intended for 52/42/30 and for 50/39/30 without much trouble once set up. I did find recently that getting the cage parallel to the rings was very important and found it easier to set the body of the FD at right angles to the long axis of the bike than to sight on the not-very-straight cage plates! This is all with an old ST-4400 9 speed STI with different trim options but I find no need to trim before shifting and rarely after for that matter.
Top

I too have had problems fitting the front derailleur on one of my bikes without it rubbing on the chain. Thankfully with advice from our forum colleagues I think I may have solved the issue but my point is, is that this must be the hardest job to do and get right on any bike.

I just cannot get into my head how you set the FD up initially as close to the chain on the smallest ring, secure the cable and then any adjustment after that is by tensioning the cable.

This is certainly a dark art to me !
Top

if you don't have a third/fourth hand tool, a very simple trick you can use to make the FD cable setting a bit easier is to

b) shift to the middle ring

This adjustment usually allows the FD to be within the range of the barrel adjuster. If you want to use indexed shifting and you don't have a barrel adjuster in the FD cable run, fit one; it will drive you nuts otherwise.

I have the chainline at 45mm for the 6503 front mech. It was a 50mm chainline, so I took 5mm of spacers out between the BB shell and drive side cup, then spaced the (HT2) spindle out with 5mm worth of spacers on the outside of the NDS cup. 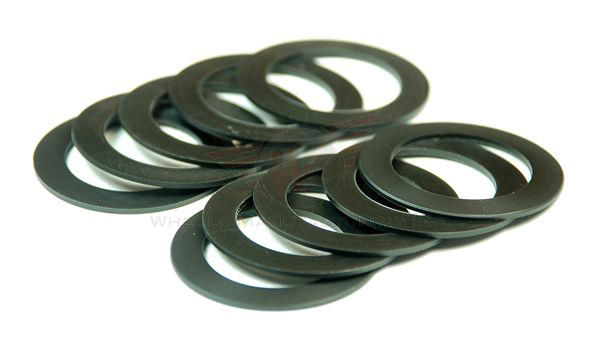 It's a better setup I think because 5mm more threads are screwed into the BB shell at the drive side. The 48t outer is quite close to the chainstay, but not too close to make the setup impossible, probably about 4mm.

Brucey it is the setup with the cable pulley yes.

So as far as I can tell, the starting position of the front mech on this shifter (ST-6510) isn't where it's fully released, it's 1 trim click up from there.
When two cyclists get married, they should throw anodized cable crimps instead of confetti.
Top

the way the cable pull is on the front mech (with that pulley thingy), it will (I think) change the shift ratio in the FD in a similar way as if the chainline were too wide. So with the chainline too wide and the pulley you had a 'double whammy'. With just one and not the other you still have problem but it will be lessened somewhat (I would expect).

If you can move the pulley, setting the cable to about the same angle as it would run if it passed between the chainstays would make the shift ratio closer to that intended. It might also make the shift action a bit heavier, but hey, you can't have everything....

Why do people use indexed shifting for the chainset? Old-fashioned friction is infinitely trimmable.

Actually I confess to fitting one of our bikes with indexed front - it's for my wife who possesses no mechanical sympathy and would happily ride for hours with the front mech rubbing the chain.
Top
Post Reply
10 posts • Page 1 of 1