I'm looking at installing a usb charger to connect to my dynamo. I've made one that fits inside my stem and thought it would be neat if it was kept in there with the cables from the dynamo coming up the steerer and the usb cable coming out the top. All it needs is a small (probably 5-8mm) hole drilled in the steerer behind the stem for the cables to go through. It's a 1inch steel ahead fork so I can't fit the charger inside the steerer.

How bad an idea is it?
Top

Even if the steerer were infinite in extent, drilling a hole at least triples the stress in it locally. In reality it is worse than that because

a) the steerer is very far from infinite in extent and
b) there are 3D considerations to take into account; this means that the chances of initiating a crack at the edge of a hole are appreciably greater than you might expect if there are stresses out of the (curved in this case) plane. There are such stresses in a steerer.

My suggestion is that

BTW A-head top caps are not waterproof anyway; you will need to provide some kind of waterproofing for the electronics.

not really, no. The clamp would have to be much longer for that effect to be seen.

FWIW there are other reasons this isn't a good idea;

a) it is perfectly avoidable
b) the failure mode if the thing cracks is absolutely merciless; death on a stick

Thank you both for your replies. I'm not overly keen on drilling holes anywhere but my thoughts were similar to Meic's comments. I suppose I could try making my charger smaller so it fits inside the steerer and then I would only be drilling a hole in the top cap.

An alternative to drilling a hole in the top cap might be to have a spacer on top of the stem and drill a hole in that (or cut/file a slot in the edge of the spacer). The wire would then exit horizontally, which should be neater and might also help a bit with minimising water ingress through the hole (although I would still try to improve that by using a bit of silicone sealant or similar).
Top

While concealing things like cables can be really neat, it does make inspection and fault finding much more difficult.
Top

slowster wrote:An alternative to drilling a hole in the top cap might be to have a spacer on top of the stem and drill a hole in that (or cut/file a slot in the edge of the spacer).

That's what the commercially available versions do (Sinewave & Cinq The Plug).
They have a USB socket rather than a trailing wire, but the principle is the same.
Top

I did exactly this on a Surly Long Haul Trucker in 2009. Used extensively until Feb this year including heavily loaded touring and off road riding that pushed the limits of a router.

The hole was drilled in the steel steerer tube at the rear to align with the little gap between the stem clamp bolts.

My logic was that the big stresses in the steerer are presumably at the bottom, and by the time it's passed the upper and lower bearing races there is no bending remaining from loads on the forks. The only stress on this part of the steerer tube then must come from a bit of preload due and the force the rider puts through the bars. Assuming the load though the bars results in a sideways moment, the hole is at the neutral axis anyway.

I also agree with the views above that being in the middle of the clamp reduces the stresses even further - after all at the very top of the steerer there is zero stress, which gradually increases to a small peak just below the stem clamping area, and the hole is roughly halfway between these points (although I'm not suggesting the stress varies linearly).

On my new alfine/belt/did supercommuter that I built over winter, i did a similar thing but came through the steerer forwards into the stem void, before drilling the bottom of the stem (which I accept is VERY dodgy despite carefully locating the hole).

On the previous bike, I also drilled the seat tube and down tube (at neutral axis). I used to inspect the down tube hole regularly until I got blaze after a few years.

If you decide to go through with it, there are some practical considerations below:

1) you need to be certain you won't need to alter stem height in future
2) The point you're proposing to drill will line up with the star nut, which makes cable installation tricky but can be done. Think carefully about the height that the star nut lobes will sit, and try to rotate it in plan so that the little gaps allow the cable to take a cleaner route.
3) think carefully about chaffing of the cable on the hole. Mine was reinforced with shrink wrap and zip tied to the stem to stop it flapping around.
Top

steerers in aluminium and carbon quite often break between the top race and the stem clamp. Weakening a steel steerer (by a factor of at least three) in this area would not be a favourite thing to do.

Upthread I mentioned that a hole might not be such a problem if the stem had a much longer clamp. Velo Orange make a stem with a suitably long clamp; 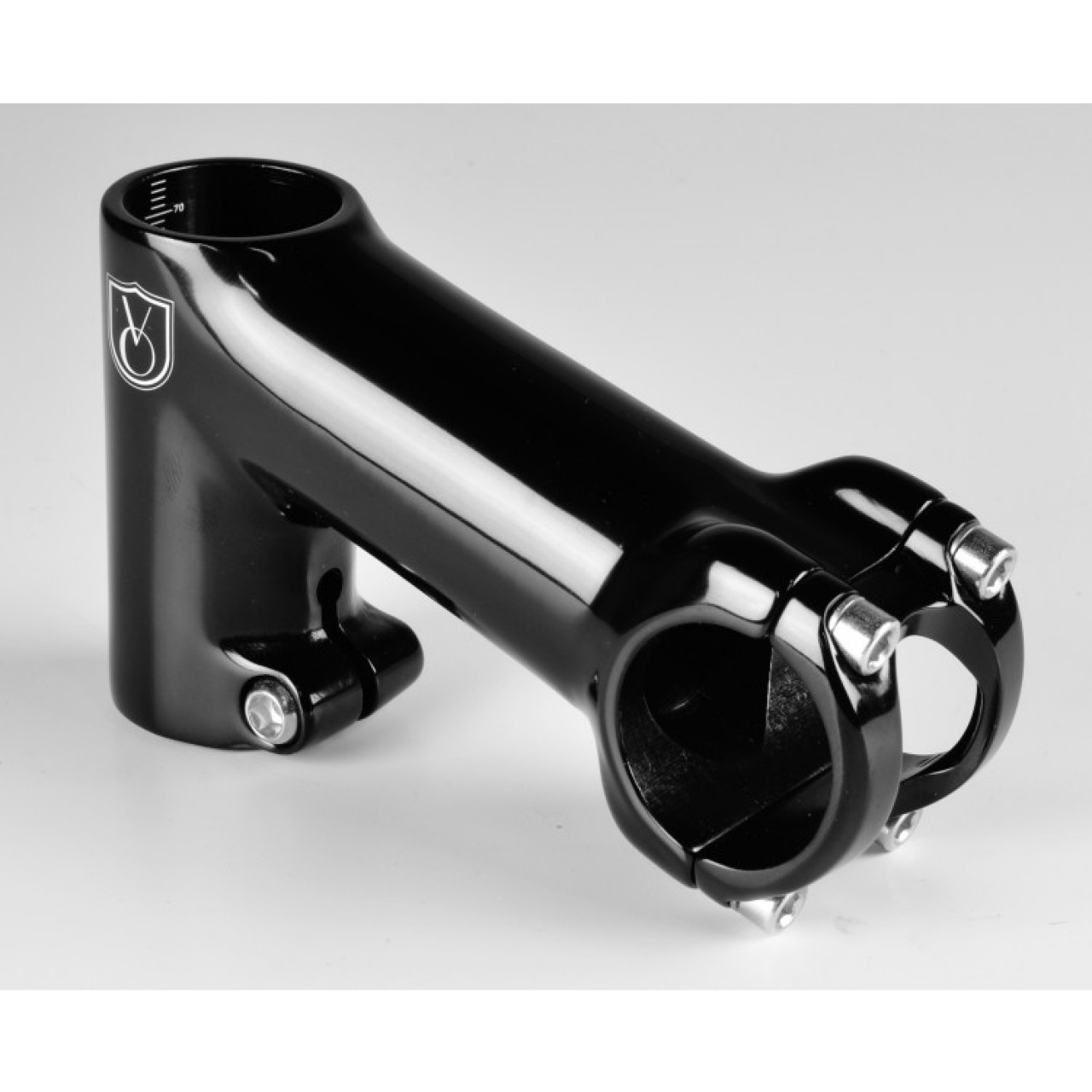 Brucey wrote:steerers in aluminium and carbon quite often break between the top race and the stem clamp. Weakening a steel steerer (by a factor of at least three) in this area would not be a favourite thing to do.

Upthread I mentioned that a hole might not be such a problem if the stem had a much longer clamp. Velo Orange make a stem with a suitably long clamp;

One bolt to clamp the stem? Bad design.
Top

one bolt is enough to hold your saddle up and from the invention of the bicycle until now, one-bolt handlebar clamps vastly outnumber those with more than one bolt. A lot depends on the tolerances of the parts and how they fit together. To blithely declare something 'bad design' isn't justified.

I can see that stresses around the hole increase, but the stresses there to start with were lower than say at the interface between the top race and the stem clamp, which as you suggest is probably the most likely place for a failure. The stresses half way up the clamped area, with or without the hole are bound to be much lower.

With regard to a one volt design, it absolutely comes down to tolerances, but the stem manufacturer has no control over the tolerances on the steerer, so there must be an element of luck here?
Top

steerers are made to a +0, - a small amount tolerance. Stems are made to a + something small, -0 tolerance. Yes you could have a bad combination but I think it is far less likely to occur than with (say ) seat pins, which routinely are such a poor fit they won't stay put no matter how many bolts there are in the clamp. Even if an Ahead stem moves around a tiny bit it isn't really going anywhere because there is a top cap holding it down.

Remember that the MO with quill stems is not to swing like a chimp on the wedge bolt, so that the handlebars can move in the event of an accident. But now, suddenly, everyone wants the stem as rigidly fixed to the steerer as possible. There is absolutely no need for this. You want a stupid stem design? Try the vast number that have the two bolts set as far apart as possible; it is quite normal for the top one to be 'gripping' fresh air....

Regarding the hole; the reason a standard stem clamp is as long as it is, is because the bending stresses are not efficiently transferred between the steerer and the stem over a shorter length. Both the service loads and the clamping loads put a pretty horrible stress on the top part of the steerer if you use a stem with a normal clamp length. If you have ever seen the consequences of having a steerer cut too short for the stem and then used with vigour, you would understand this.

If you absolutely must start bodging holes through the side of your steerer, you could do it provided you made the steerer locally thicker where the hole is, and/or reinforced the tube wall locally. So for example if you bonded a second tube inside the steerer, that would be a better arrangement for you to stuff a hole though. Similarly if you brazed in a reinforcing sleeve, or built up the wall thickness of the tubing locally (eg by additive welding) and did it in the right way, you could end up with a thickened region that you could put a hole through. In round numbers the wall thickness would have to be about three times as thick where the hole is to be drilled, to keep the stresses near the previous level.

Brucey wrote:one bolt is enough to hold your saddle up and from the invention of the bicycle until now, one-bolt handlebar clamps vastly outnumber those with more than one bolt. A lot depends on the tolerances of the parts and how they fit together. To blithely declare something 'bad design' isn't justified.