For discussions about bikes and equipment.
Post Reply
12 posts • Page 1 of 1

Looking for a disc brake compatible dynamo hub for a new build. Price ideally under £100, I have seen the SP PL-8 at Spa cycles for centre lock discs for £70 which seems a good price, but I am slightly put off by lack of user servicing compared to higher end Shimano offerings at similar prices e.g. DH-S501, for which the slight weight penalty is not much of an issue to me. I have also seen an older model DH-S500, what is the difference between that and current model? Also I like the look of centre lock disc system, am I right in thinking it is a better system than 6 bolt mounting?
Last edited by niggle on 22 Dec 2018, 7:25am, edited 1 time in total.
Top

There was a 3N80 36H in the classifieds here recently, snap it up if still available.
Top

Faced with his a while back I went for the N72 over the 80, purely because I preferred the steel axel over the aluminium on the N80. If you go with centre lock, be aware you need to use a cassette removal tool to get it off. As I like to remove my disc when flying with the bike, I ruled it out and went for 6 bolt (adaptors from centre lock are available). Can't say as the rotor retaining system has ever made a scrap of difference on any of my bikes.


This is on a tourer designed for heavy duty use in my case, so robustness was very high on my priority list.
Supporter of the A10 corridor cycling campaign serving Royston to Cambridge http://a10corridorcycle.com. Never knew gardening secateurs were an essential part of the on bike tool kit until I took up campaigning.....
Top

I would also note that centrelock discs are usually less readily available, more likely to be soft ("use resin pads only") and cost more than six-bolt discs.

You can compare the 500 and 501 model hubs using the EV techdocs and looking for parts compatibility.

Brucey wrote:I object to centrelock hubs with adjustable cup and cone bearings because they are very often constructed in such a way as you can only adjust them on the RH side. This is bad practice, because the RH side cone and locknut needs to be set extra tight, in order to avoid the possible effects of precession (which can destroy the hub bearings if the RH side cone starts to move, but is somewhat less harmful if the LH side starts to move).

I would also note that centrelock discs are usually less readily available, more likely to be soft ("use resin pads only") and cost more than six-bolt discs.

You can compare the 500 and 501 model hubs using the EV techdocs and looking for parts compatibility.

Thanks Brucey, I had noted the higher cost of centrelock discs but not the other points you make, for the rear I will be using an Alfine11 so centrelock is the only option, but what would be a good 6 bolt dynamo hub for the front? I have the non disc DH-3N80 on another bike and think it is pretty good but the new bike will be for touring and mild trail riding so thinking steel axle would be preferable.
Top

thinking about it, my objection about bearing adjustment cannot apply to a hub dynamo of course; the RH side is all snarled up with wires and so forth and doesn't usually move at all easily. However it isn't unusual to have to remove a centrelock disc before being able to adjust the bearings and occasionally I have encountered a centrelock hub in which the LH cone is not readily accessible even then.

So having looked through the Shimano website I find there is only one dynamo hub model offered with 6 bolt disc mounting, the DH-3D32 which is fairly low end, on the heavy side, not very well sealed and supposed to be not that efficient. Otherwise I have to either go with a Shimano centre lock dynamo hub, probably the Alfine DH-S501, or Spar's offer of the 6 bolt SP PD8 for £70, which is actually marginally less than I can find the Alfine for anywhere. How reliable are the SP hubs nowadays? They are certainly commendably light and sleek looking.

One option mentioned was to use a 6 bolt adaptor on a Shimano centre lock hub, the official Shimano one can be bought for about £12.
Top

I bought mine a few months back from Rose Bikes, this one

And bought a centrelock to 6 bolt adaptor at the same time. Works for me, and cheap to boot.
Top

the six-bolt adaptor is great for flexibility of disc choice but doesn't really make the bearing adjustment issue any different. FWIW I have a centrelock shimano hub dynamo and it is OK, but on balance I'd probably prefer a six-bolt one if given the choice.

The SP hubs are Ok but the bearings don't last for ever; however it isn't the end of the world if the bearings fail outside warranty; it is a £25 + wheel rebuild problem.

Other six bolt hubs include SRAM (but finding one is difficult) 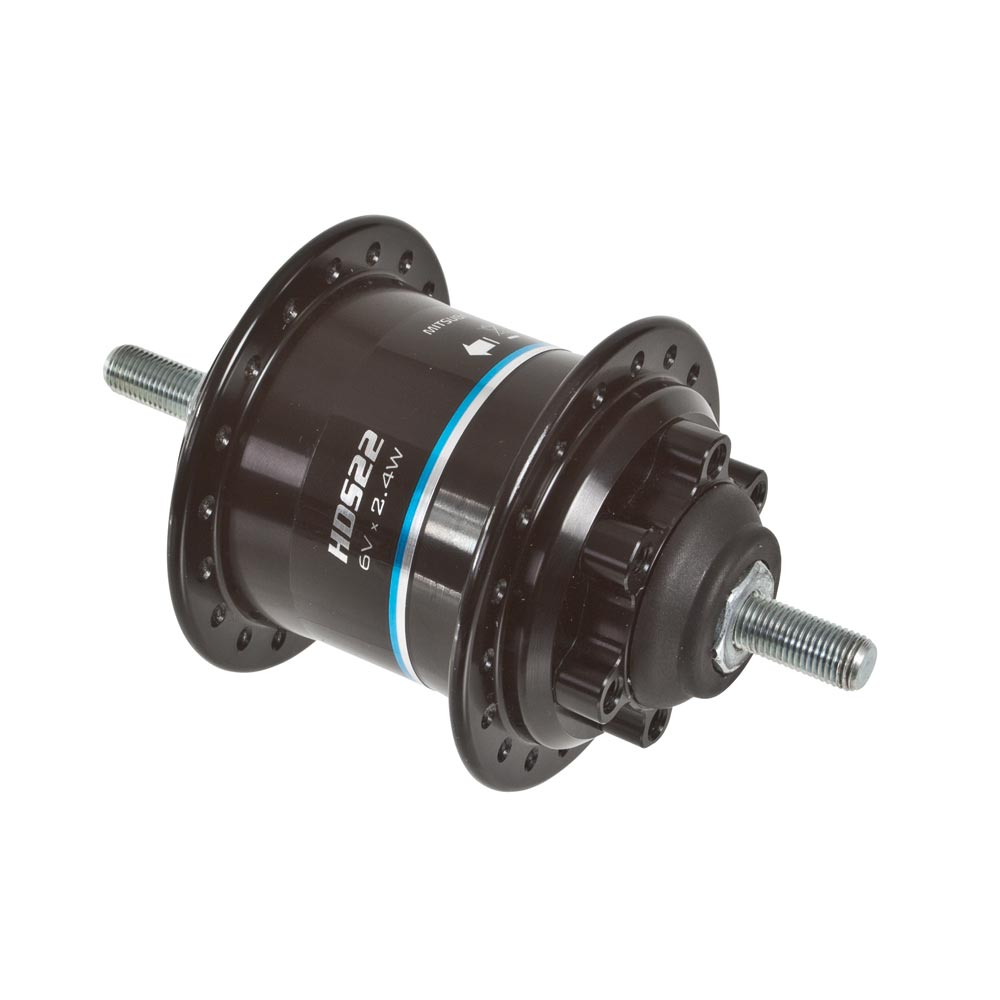 The SRAM seem to be unobtainable now and the Sturmey weighs a whopping 835g and only puts out 2.4W. A fair proportion of users report getting early bearing failure with SP hubs which puts me off as even though the repair service is very reasonably priced, you still have to dismantle the wheel and then wait around whilst the repair is done then rebuild the wheel.

Meanwhile somebody has kindly PM'd me a link to a Shimano DH-3D72 for very cheap, but it is only 32H, so now pondering how essential the 4 extra spokes are on my usual preference of 36H for a touring front wheel...
Top

unless you intend on carrying a large front load and/or using a front rim that is built very light, I think that 32 spokes in a front wheel will be OK, with rim brakes certainly, with disc brakes usually (the wheel will be weaker because it is more dished)

Brucey wrote:unless you intend on carrying a large front load and/or using a front rim that is built very light, I think that 32 spokes in a front wheel will be OK, with rim brakes certainly, with disc brakes usually (the wheel will be weaker because it is more dished)

No more than a light front load and will be lacing to a ~19mm internal width touring rim, probably a Ryde Zac 2000 as that is what I have a pair of in 36h for this build.
Top
Post Reply
12 posts • Page 1 of 1