Hi,
have just registered here. I have an old 3-speed roadster built in the early 1970's which has a Styria 3-speed hub, that looks pretty much like a Sturmey clone. Are these true clones and are the internal parts interchangeable with Sturmey? Thanks.
Top 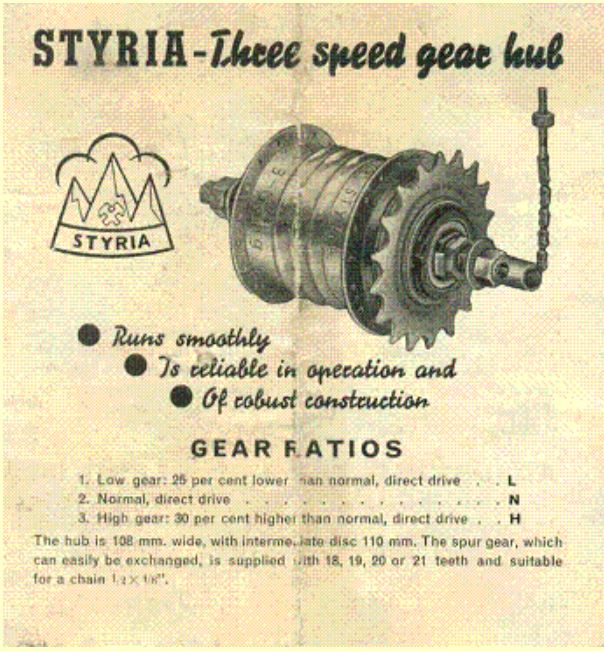 Steyr Daimler used to make all kinds of stuff (including 'Puch' bicycles and FWD gearboxes/vehicles) and I think they made gears that were branded 'Styria'. I have not inspected one inside to see if it is the same as a sturmey archer gear, but if as pictured it may share some parts; the way the sprocket is mounted, the way the RH cone and locknut are made looks very similar. Also the hubshell diameter seems larger than (say) F&S gears would have been. However it clearly isn't identical to a sturmey gear either; the hubshell has ribs and if it has pressed indents seen in the hubshell on some IGHs (including Styria F&S gears, some shimano etc) they are built-in dog rings, and hubs with built-in dog rings are always built differently from those with inserts for the dog rings (SA AW etc).

The situation is complicated because there were lots of companies in eastern Europe that made coaster brakes and they may have bought them (or parts for them) from one another and rebranded them; they may have done the same thing with 3s gears too. So a F&S coaster brake looks (superficially) quite a lot like a Styria or a Favorit (or when sold in the US a Bendix) and it may be possible to interchange parts in some cases. 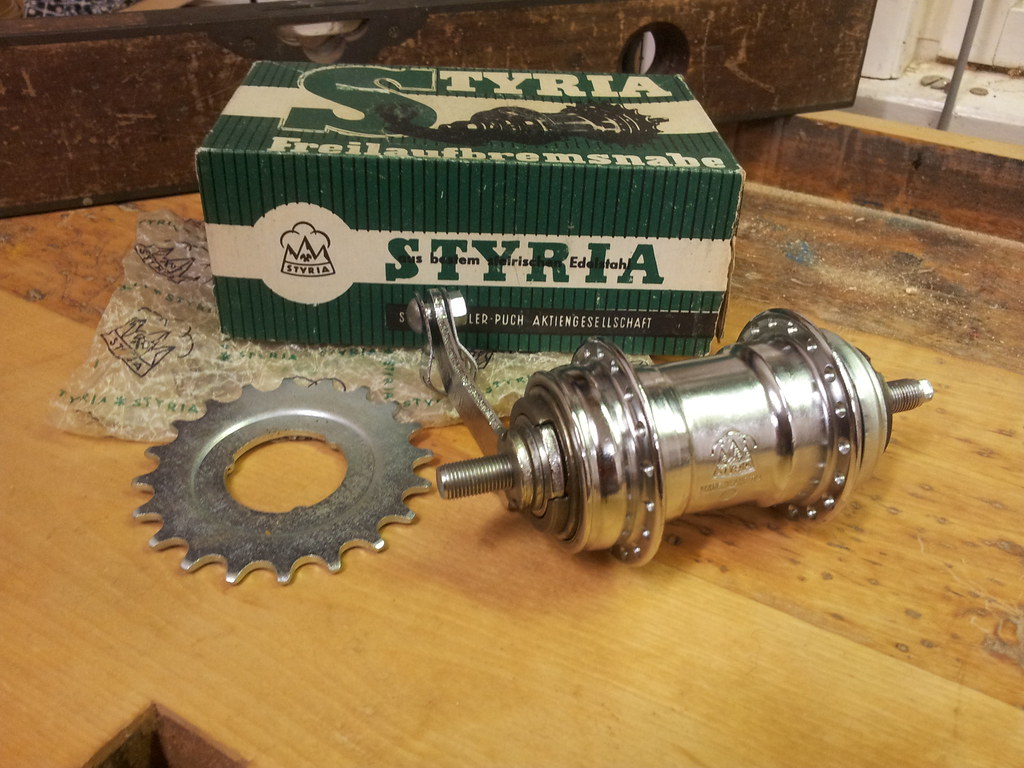 My understanding is that F&S (despite having made hub gears for almost as long as SA and having innovated in their own right) in some way infringed SA patents and were paying royalties to SA for some time in the 1950s. I have worked on one or two 1950s F&S 3s 'torpedoes' and they sometimes have screw-in RH dog rings like SA hubs but they don't share any parts. Other hubs were direct SA clones and may have used some SA parts eg inside; SA built hubs were sold under several different brand names.

For example this 'Sears' branded hub (made in Austria, by Steyr) is -despite its ribbed hubshell- a SA AW clone; you can see by looking that it might be like an AW because it has inserted dog rings at both ends and is dimensioned like an AW too.

Any photos of you hub (externally and/or internally) would be interesting for sure.

this one appears to have a press-fit LH dog ring, as later SA hubs also had

In the linked thread above a very basic mistake was made; a NIG axle was sourced to replace a non-NIG axle, hence the slot was in the wrong place on the axle. It would only have been possible to select gears 2 and 3 with that axle fitted. Nothing to do with manufacturing tolerances etc. The broken axle (indeed all the internal parts) appear to be identical to SA ones, and indeed Steyr may have done little more than made the hubshell and assembled it. 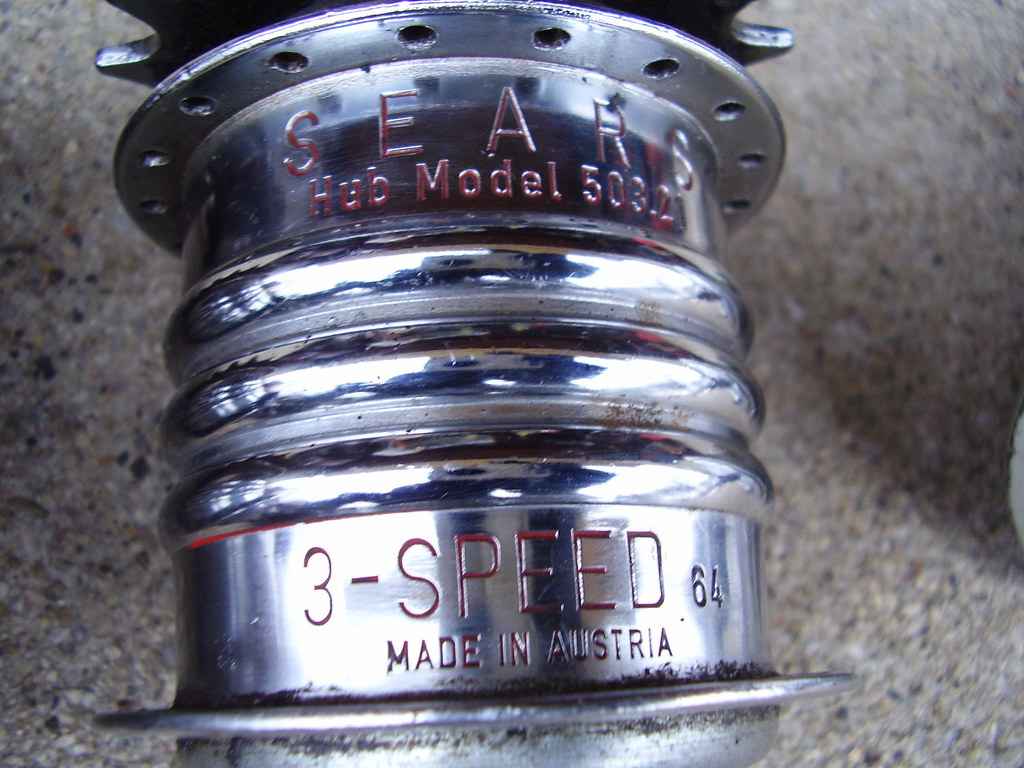 a close-up photo of the hub pictured upthread, I think 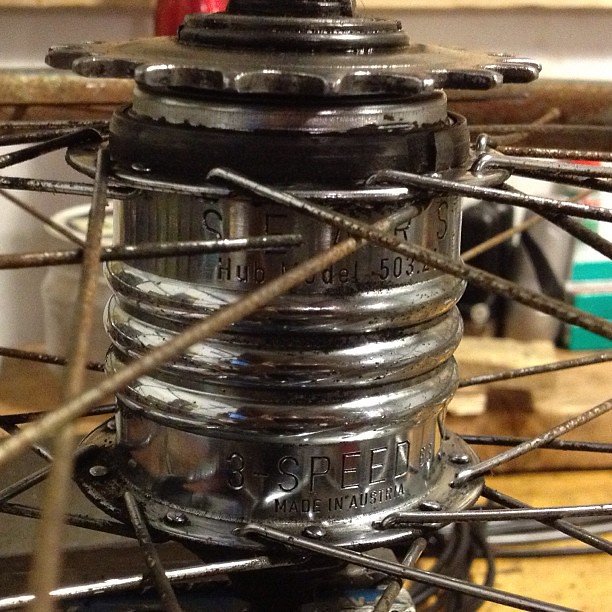 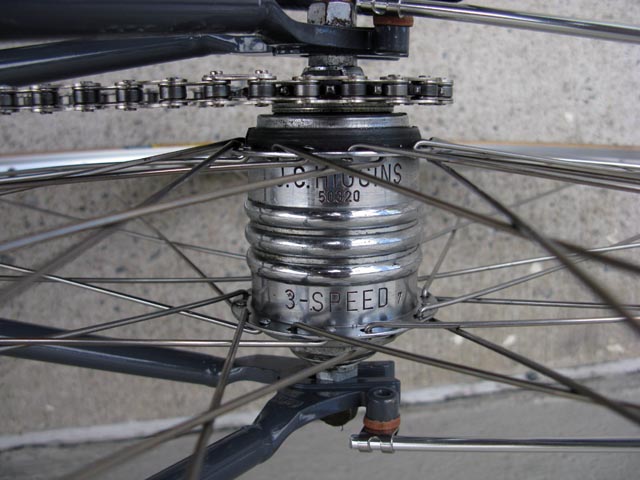 Thanks for the detailed replies. Mine is just a straight gear hub, with no coaster brake or dynamo feature. It rides exactly like a Sturmey AW in respect of the ratio gaps between the gears, which makes ,me think it could have similar internals. The bike it belongs to is a cheap & cheerful Austrian Puch, and I'm sure that later versions of the same bikes actually were fitted with Sturmey hubs. When I get a chance I'll have to post a pic, but the casing closely resembles a non-dynohub SA unit.
Top

pictures would be interesting!

FWIW Puch used their own Styria gears , F&S, or SA ones at different times I think.

I am cleaning up a Jack Hateley bike I have just bought on ebay and was amazed to find, when I removed all the clag, that the rear hub is not Sturmey-Archer but 'Styria' made in Austria. The indirect gears are 3:4 and 4:3. Maybe '69' is the year of manufacture. 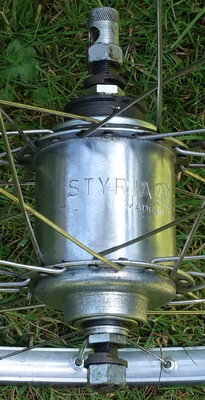 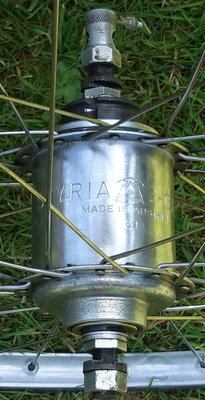 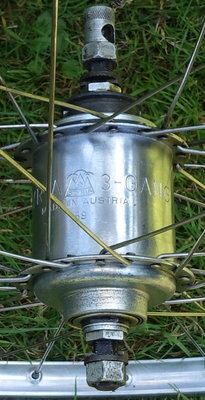 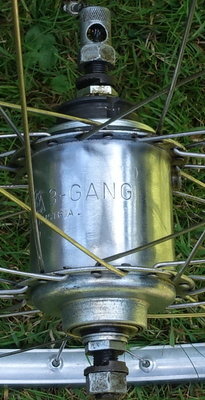 I think it is quite possible that Styria bought the internals from SA and only made the hubshells.

AFAICT the styria internals are typically compatible with older (pre NIG type) SA AW internal parts. If in doubt, please post a photo of your internal parts. Are there specific parts that you need?

Brucey wrote:... Are there specific parts that you need?

Thanks, Brucey, but no parts needed at the moment. It worked fine during minimal testing (a couple of miles). Judging by the general state of the back wheel it has been subjected to too much oil rather than too little. So all I plan to do is fit a larger sprocket (21t vs 18t) to lower the gearing.
Top
Post Reply
9 posts • Page 1 of 1