My trusty Dawes Galaxy (circa 1989) has suffered a seat stay fracture just below where the stay is brazed onto the down tube/top tube lug.

Is this sort of problem fixable and if so, what is the technique to be used i.e. brazing.welding (and what type of welding)? And is this work within the scope of a competant brazer or does it require specialist knowledge?

I realise the paint will need doing, but that's not an issue for me - I would just like my favourite bike of all time to be better again (sob sob).

Many thanks for your advice, best wishes, AlanM 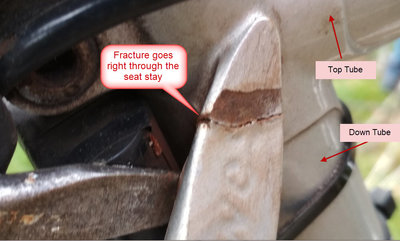 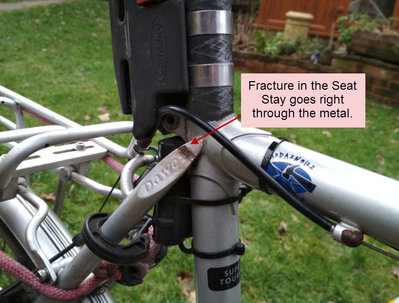 Last edited by bikes4two on 7 Feb 2019, 4:58am, edited 1 time in total.
Without my stoker, every trip would only be half a journey
Top


You would need a respray after. Mercian quote £150 and Vernon Barker £90 for a frame and fork respray.

You could weld it but it would be quite a ugly repair and may not work.
A cart horse trapped in the body of a man.
http://www.jogler2009.blogspot.com
Top

if not going to a framebuilder there are a few methods including;


2) welding. If you 'V' out the full depth of the crack it can be filled with weld metal. Because there is braze-metal nearby (*), I don't recommend TIG welding. However it is usually possible to 'butter' the faces of the V using low heat input MIG in such a way as the damage caused by remelting the braze metal is acceptable. The weldment can be completed using MIG or TIG. Whether this ends up looking like a dog's breakfast or not depends on the skill of the welder and the amount of weld dressing that is done.

(*) the top eye is often covered by a plate that is simply brazed on, so there is this to worry about as well as the fillet to the seat lug itself.

This kind of damage isn't that unusual on touring bikes, I think because the stays see swaying loads when carrying panniers. It is more common if you habitually carry one pannier. If you want to reinforce the area so that this isn't so likely to happen again, it isn't a bad idea to weld or braze a reinforcement between the stays, near the seat lug. A simple cruciform 'X' piece in 14G steel would do it, and can act as a convenient mounting point for a canti or centrepull brake hanger too.

Could you weld it without affecting the brazed joint I wonder.
Top

MIG is low heat input (compared to gas welding) and unlike gas the welding can be done in short bursts with a cooling down interval, in order to avoid melting the brass brazing. An acceptable, but not totally invisible, repair would not be difficult for even a reasonable DIY welder. A localised MIG repair may also avoid the need for a complete frame repaint and could be touched up instead.
Top

Check your warranty. It may have a lifetime guarantee against such failure. My Super Galaxy tandem had an almost identical failure and despite being 9 years old was repaired and resprayed by Dawes. They collected the frame from my local dealer and delivered it back to me at home in the colour of my choice, from their current paint colours.
Whilst waiting to hear from them I carried on riding it having used a toe strap to hold the tubes together. It was a marathon design so had additional stays going to to rear triangle.

Open it up to 50% tube o.d. with a fine hacksaw blade .... a well worn one is best, takes longer, but cut is finer, then fill braze ....
Used X-Acto needle saw on mine and still going strong after over 1k miles in use.
However i have not used it to carry loads ... apart from my considerable self of course ..

The Road Goes On Forever
Top

12 months ago my 1989 Super Galaxy had both seat stays fail exactly like that. I bought it new but it never occurred to me that it had a lifetime guarantee! I bought a new Spa frame as a replacement.
Top

1. Thank you all for your views and I now have a better understanding of the possible routes forward.

2. I am I think, the 3rd owner of the bike, so no possibility of a lifetime warranty claim.

3. The two frame repairers linked to are many miles from me down here in the Portsmouth area, but they serve as a good price guide as to what I might expect if I'm fortunate enough to find someone local (notice on Portsmouth CTC coming soon....)

4. I paid just £350 for this fully refurbished bike some 8 years ago (bought from Jerry Hoyte sometime of this forum) and have done thousands of miles of loaded tours, to say nothing of the local runs. It has been a wonderful work-horse and my most comfortable bike I've ever had the pleasure to ride, so I've had pay-back for sure and it is pleasing to know there are ways forward for repairs and even more riding.

5. Brucey's note about seeing this sort of problem on tourers is interesting, especially the point about riding with just one pannier. This is something I VERY RARELY do, but i have done on the odd occasion and the pannier in question affixes to the opposite side to the fractured seat stay -hmmm - max turning moments etc etc?

Thanks once again
Without my stoker, every trip would only be half a journey
Top

Should one go to a cycle frame builder, or would a good non-specialist craftsperson be as good?
Could there be damage elsewhere that is not visible?
Entertainer, kidult, curmudgeon
Cycling-of course, but it is far better on a Gillott
We love safety cameras, we love life "597"
Top

If you are in Portsmouth then you have Demon Frameworks and Rotrax nearby, both in Southampton.
Top

bikes4two wrote:5. Brucey's note about seeing this sort of problem on tourers is interesting, especially the point about riding with just one pannier. This is something I VERY RARELY do, but i have done on the odd occasion and the pannier in question affixes to the opposite side to the fractured seat stay -hmmm - max turning moments etc etc?

I would think that it would have to be quite heavy; as in touring load heavy, for single pannierism to make any difference in failures like this.

I donæt have Brucey's experience wiht looking bicycle failures, but it is a type of failure one might expect on bikes that carry pannier loads.

IMO, how well the rack & load are typically secured, and how heavy a typical load is, would make more difference than whether one occasionally (or even habitually) carries a single pannier.
“In some ways, it is easier to be a dissident, for then one is without responsibility.”
― Nelson Mandela, Long Walk to Freedom
Top

Silver Solder melts at a lower temperature than Brass/ Brazing so MIGHT be the way forward, problem is the tab of the seatstay is still attatched so if you try and repair you have to effectively bridge the gap to the rest of the stay which might be trickier than you think (the bit with Dawes Stamped on is just a metal filler, it's where the stay butts up to the lug behind it that's the critical bit. )
I am intrigued if anything has happened to cause the failure other than simply riding it? .
Welding is just nasty. It deserves better. And it might compromise the Joint at the Lug .
Top

I've seen several frames (of different makes) fail in this way, and the riders were known to have, or admitted to, routinely riding around with one heavily loaded pannier on board. I have also seen more than one Dawes galaxy fail in exactly this spot, so they may be more than averagely susceptible. The lateral stiffness of the rack (by itself i.e. without the top mounts) makes a big difference to the fatigue loadings that are imparted to the frame through the seat stays, but put it this way, there are very few racks with two mounts where you wouldn't immediately notice if one was loose or missing. With one pannier on, just going over bumps puts horrendous loads through the stays. Also note that if you tend to make the rack sway when pedalling it can be made worse and NB this kind of damage can still occur when the pannier load is even both sides.

On one occasion I sold a very nice vintage Claud Butler to a friend, and advised him not to use it with just one pannier. He carried on regardless, it broke, and of course muggins here was daft enough to help him fix it anyway....