Rob_J wrote:Thank you for the excellent posts, Brucey. I have been using an SRF5(W) for a couple of years when it suddenly lost gears 4 and 5.

My FWs and S5s have timing marks on the sun pinions. Don't know if the SRF5 (W) does, but if so, it's Important that these are correctly orientated on re assembly.
Top

FWIW I have seen a 5s hub with marked planet gears in which the markings were not unequivocal; it was possible to misassemble this hub.

Brucey wrote:If the high gear drive pawls are damaged, then gear 3 ought to be lost as well. Loss of gear 4/5 only is more suggestive that the sliding clutch isn't engaging correctly with the planet cage, or perhaps that the sun locking keys are not moving as they should.

Thank you for those tips. In the end I bought an RS-RF3 and installed that as a replacement to the SRF5(W). I wanted to get the bicycle usable again quickly and thought I would try out a rotary-shifting version. It came with a thumb-shifter, which has worked perfectly, so far.

When I have the time, I'll have another look inside the SRF5(W) and see if I can fix it. I won't start using it again, though, without first obtaining a better design of shifter.

today I was handed a 5s (W) internal that had been scrapped; "lost low gears" I was told, so I immediately suspected that the low gear drive pawls might be bad. However when examined it had an unusual fault; the sun pinion bias spring was broken or missing, allowing the sun pinions to float about randomly, except in gears 4 and 5, when they are pushed leftwards by the sliding clutch.

I've seen this happen once before, and on that occasion, there were (as you might expect) numerous spring fragments floating around inside the hub, where the spring had snagged on something, been drawn out into the workings and had then been mangled. It took ages to clean the bits out of the workings. However it wasn't the only problem in the hub and it is difficult to say what the first problem was; it could be that something else failed first and then the sun pinion bias spring was 'collateral damage' as it were.

Today's hub was different; it had clearly done only a few miles, there were no other problems with it and furthermore it looked as if no-one had disassembled the internal ever; the factory grease was still present and it accumulates in corners of the workings and then dries out; it does so in a distinctive fashion and this hub showed all the signs of never having been touched. The sun pinion bias spring wasn't working; indeed it wasn't there. I expected to find bits of it floating around but there was absolutely no sign of it, or damage in any of the parts through which pieces of it might have passed. Thus I have no means of proving it, but I rather suspect that the hub came out of the factory without one fitted.

Needless to say you can see (by reference to the 'dogs ahoy' picture upthread) that if gear 2 is selected and the sun pinions are not pushed rightwards, they can separate and leave a gap between them that is wide enough for the axle key to pass between, thus giving a neutral gear.

Has anyone else seen a similar fault?

FWIW it appears that the spring can't be changed without taking the Atlas assy apart; however it is riveted together so it isn't designed to be taken apart. Since atlas assys are fantastically expensive to buy (especially considering the spring by itself ought to cost pennies), and I now have two without springs, I shall be drilling out the rivets and 'having a go'.

Rob_J wrote:In the end I bought an RS-RF3 and installed that as a replacement to the SRF5(W). I wanted to get the bicycle usable again quickly and thought I would try out a rotary-shifting version. It came with a thumb-shifter, which has worked perfectly, so far.

Well, that RS-RF3 worked perfectly for about three months, until last week, when the gear cable went slack. The fault appears to be the return spring in the 'fulcrum lever set'. I've not opened that up to check whether the spring has snapped or come loose, for fear of voiding a warranty. In any case, the spring isn't listed as a spare part, but the fulcrum lever set is, so I will replace that.

I confess I have not messed about with the RS-RF3 hub much. But the basic way the shifting works is not wildly dissimilar from the 7s sprinter hub from the late 1990s. That hub again had a concentric shift actuator that turned in its own set of bearings, and had a set of spiral ramps to actuate the main sliding clutch. An external spring provided the main return force to the shift cable.

If the shift cable went slack I'd check that the shift actuator, part #30 here
http://www.sturmey-archer.com/files/catalog/files/271/PART%20LIST%20-%20RS-RF3.pdf

turned freely. If it doesn't turn freely then this could cause the fault, even if the spring in the fulcrum lever assy (I assume there is one?) is intact. If the hub adjustment goes out of whack (eg RH cone comes loose and starts to precess) or dirt gets into the mechanism this may cause the shift actuator to bind.

If the spring is already broken, it may suggest that there is problem with this part, i.e. that a replacement assy will likely soon fail in a similar way.

Not that you should have to, but it may be possible to install an external return spring, eg by using a longer gear cable, and anchoring a tension spring to the end of it using a second pinch bolt. The other end of the tension spring would need to be anchored to the chainstay.

If you remember upthread I mentioned that one of the slightly crazy aspects of the (W) hubs is that the sun pinions are not only biased rightwards, but they must move under the action of this spring if you are to get all five gears. This means that failure of the biasing spring means failure of the hub. And biasing spring problems are not unknown. To rectify this fault you are expected to purchase the 'Atlas assembly' 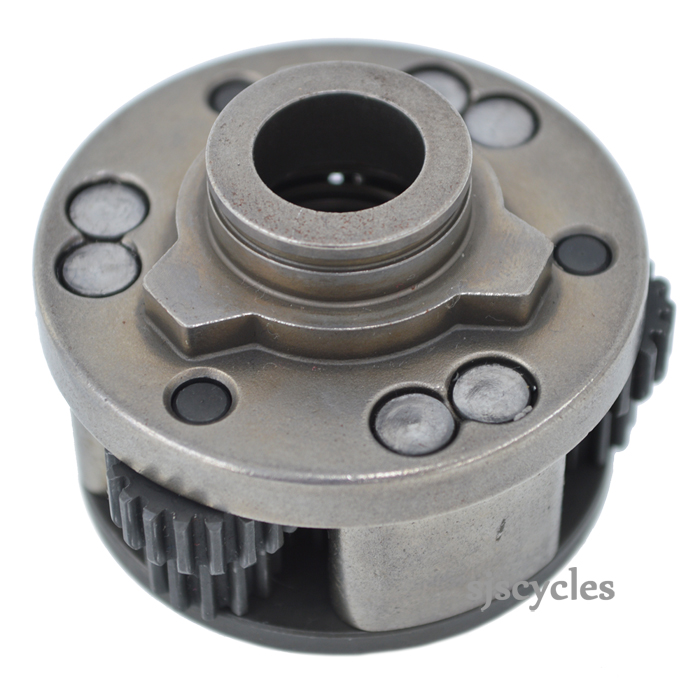 The spring, which would cost pennies by itself, is buried within this assembly which is riveted together with six chunky rivets. This wouldn't be so bad but (bafflingly) the Atlas assembly is only slightly cheaper than a complete internal is. Not so much an 'Atlas' assembly as an 'Alas' assembly...

Having several Atlas assemblies with duff/no springs (at least one came out of a faulty hub in pieces) I wondered if there was a cure. I contemplated trying to feed a new spring into the assembly, but reckoned that there was no way of doing it without distorting the new spring. Also, not only did I not know exactly what the new spring should look like, I didn't know if parts of the old spring were still inside in every case or not.

I decided that the thing would have to come apart, and that meant drilling the rivets out. There are six rivets, with large heads at the rear (LHS) and smaller ones at the front. Since one repair option is to convert the rivets to bolts, and there is probably more space (or could be) on the LHS for bolt heads, I decided to drill from the LHS; this might also make the rivets easier to drift out, since the atlas assembly will sit nicely over a bench vice one way up but not the other. It wasn't too difficult to do the drilling. 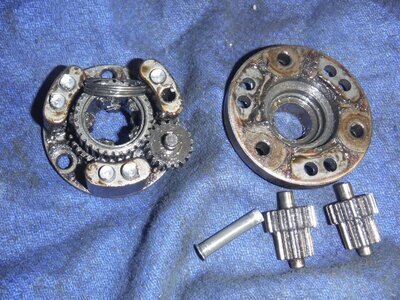 inside, one spring squashed flat (on the left, perched at an angle)

The rivets have shanks that are 4.4mm diameter and inside the assembly I found a spring that had either been made wrong from the start or had seen some weird loads (the possible nature of which I don't understand at all) and had become crushed.
I decided to try and reshape the spring; 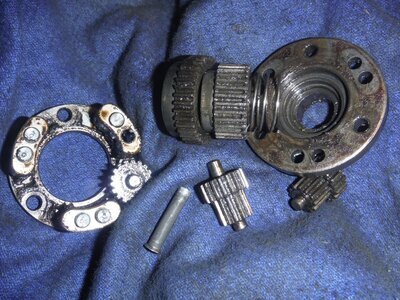 after reshaping the spring

The spring above appears to be made in wire which doesn't have full temper, in that I was able to reshape the spring without undue difficulty. On reflection I am thinking the 'deformation in service' hypothesis is probably correct; the spring diameter had evidently increased because the spring didn't have an integer number of turns (which spring designers tend to avoid) and the diameter was both uneven and larger than would comfortably fit in the recesses which the spring sits in.

The spring is (AFAICT) ~4 turns, ~0.9mm wire diameter, and about 19mm OD. The length.... I'm not so sure about. I shall try about 12mm length and compare the force on the planet gears with a 'known good' example. I shall come up with a plan to turn the rivets into threaded fasteners, and probably I shall have to grind pockets into part HSA676 to make room for the fastener heads.

But I am slightly optimistic that the Atlas assembly can be repaired this way.....we shall see if my optimism is misplaced or not.

A further comment I would make is that in my photos above you can see how the planet pinion bushings are made. This design departs from all previous SA 5s hubs in that there is no separate pinion pin. This means instead of (say, as per FW hubs) a ~1/4" bushing which is about 25mm long, you have two short bushings of much smaller diameter.

A similar bushing design is used in SA 8s hubs and in these hubs bushing wear (in the RH gear stage) is inevitable. Despite the relatively poor bushing design in the (W) model of 5s hub I have yet to see severe bushing wear; this is partly to do with the fact that the hub has a direct drive gear (gear 3) which spares the bushings any wear at all. However it might be -with my cynical head on- that these hubs don't manage enough miles to manifest wear because they find some other way of going wrong first. 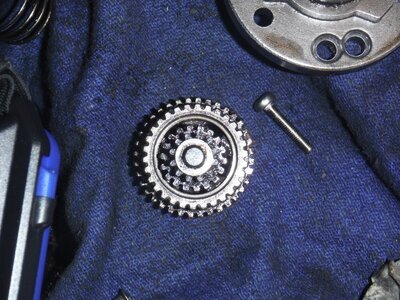