For discussions about bikes and equipment.
Post Reply
112 posts

Getting kind of fed up with rim-brake rims which are almost worn out when new.

Recently have had Mavic XM317 rims which have measured down to 1mm sidewall thickness when new. Used to be the recommended throw-away thickness I think, according to Chris Juden. One lasted a grand total of 2000 commuting miles before sidewall failure. I've recently had another built into a disc-specific wheel for another bike and it too is down to 1 - 1.1mm in places before use.

I recently ordered some Kinlin XM250 rims for my winter bike but have sent them back to Spa Cycles as they measured as little as 1.2mm in places. The Rigida Chrinas previously fitted to the bike were around 1.5mm thick when new but are too narrow for the 32mm tyres I now use and the quality seems to have dropped since they were rebranded 'Ryde'.

I have an Exal LX17 on the front of my commuter bike and the minimum thickness of that is around 1.3mm. All of the rims I measured vary in thickness by around 0.3mm and all have machined braking surfaces.

Need to swap the Kinlins for something more durable as the bike covers most of its mileage on filthy lanes in winter and rim wear is definitely an issue. Is there any point shelling out for H-Plus Son Archetypes or are any of the other rims Spa stock worth a look instead? Don't want any very heavy rims, e.g Sputniks, ideally around 500-550g.

I have built several hundreds Archetype rims... while the rim is very robust, the braking surface wears fairly quickly. They are typically concave around the 5-6,000 miles mark if you use them all year round

I don't think you can get light rims with a thick brake shoulder... it's an oxymoron. Touring rims are durable, but they are closer to 600 grams than they are to 500
Top

I think Sputniks are closer to 700g. Chrinas currently fitted are around 515g so the ~200g difference would be noticeable. Like having a large bar of Dairy Milk strapped to the rim

Just wondered if anyone else on here had ever measured their rim thicknesses?
Top

bgnukem wrote:
Just wondered if anyone else on here had ever measured their rim thicknesses?

It's not simple and even using the two spokes method with a Vernier, you end up with a range of numbers which might differ by as much as 0.3 mm... which is the difference between a thin rim and a thicker one.

Ultimately, you can make thin rims last forever, if you avoid riding in Shropshire in November for example. I killed my rear DT 460 in 2 rides... it survived fine from April to October, almost unblemished, then two rides killed it completely.
Top

I just use an Iwanson dental gauge, a small caliper-type thingy, about a fiver from eBay.

Riding with a touring (CUK) section I tend to use the brakes a lot more to avoid getting too far ahead. I'm probably 20-30 years younger than most of them (at 47!)
Top

ok cheap shot, sorry ...I have been using the ryde zac series on my muddy canal ride. They are lighter than Sputniks but still wide at 19mm etrto..I have a new zac 2000 at home.... i could put my iwanson guage on if you want it measured??
Top

S2L wrote:I have built several hundreds Archetype rims... while the rim is very robust, the braking surface wears fairly quickly. They are typically concave around the 5-6,000 miles mark if you use them all year round

I don't think you can get light rims with a thick brake shoulder... it's an oxymoron. Touring rims are durable, but they are closer to 600 grams than they are to 500

Yes, my observations too. I was tired of wearing out Mavic rims so quickly, Ryde Chrina rims last better but mine are a struggle to fit tyres to.

So my main training bike was treated to a couple of Son Archetype rims, nice and strong, but after a year of use a surprising amount of wear on a bike I try and avoid using in the worst weather.
Top

some versions of CXP22 rims used to have a reasonable thickness to the braking surface but since they have been rebranded (as CXP elite) they are miserably thin (around 1.3mm) just like all the other dross out there. The mavic Open elite (formerly the opens sport) is also now thinner than it ought to be.
Of lightish rims I have used Archetypes have the thickest braking surfaces. However they are not terribly good value because they are more expensive than many alternatives.

I really do wish rim manufacturers would wake up and start making unmachined rims with decent braking surface thickness again. As it is, I think they 'save money' by not straightening the rim properly before machining it, which leaves a rim with a variable wall thickness. Obviously this will soon fail at the thinnest spot. Duh.

As others have reported I have measured many new rims and most of them have been basically worn out when they are new.

Candidate rims for light touring/commuting/training include

Rigida/Ryde used to make lighter rims with the CSS coating but they seem to have discontinued them.

VO make unmachined rims but they seem very similar to rigidas from the 1980s to me, i.e. they are pretty soft, but unlike rigidas of times past they are in addition ruinously expensive.

Somewhere I have a pair of Mavic Module 3 rims from BITD. These rims weigh about 520g , are 22mm wide and have brake tracks about 2mm thickness. C'mon Mavic, you know you can do it......stop foisting your current crap on us!!!

Thanks for the replies. I'll maybe consider Archetypes or the others Brucey mentions.

ZAC2000 measurements would be interesting too.

Bearing in mind I'm pretty religious about cleaning aluminium/grit out of brake pads, use Koolstop Salmons where I can find them (else Swisstop) and clean the rim braking surfaces after every decent ride the performance of recent rims has been pretty pathetic.

Ironically the same bike had Module 3 rims years ago, after I junked the original Alesa 917s as being too heavy! I seem to recall having to true the wheels a lot with the Mod 3s, so maybe not all good though I'd snap Some up today if there were any left!
Top

shallow rims like the module 3 (and the Super champion Mod58 which was a single wall rim) don't build into terribly strong rear wheels if they have much dish to them. These rims are sufficiently flexible that NDS nipples will often back out unless threadlocked.

Machined braking surfaces (of any given thickness ) tend not to wear as well as rims that are not machined; there are several reasons why this might be. Annoyingly most rim manufacturers use extrusions that would be OK if they simply didn't bother machining them! The difference between a rim with a decent brake track thickness and one that is almost worn out when it is new is about 30g per rim; hardly enough to be worth worrying about, yet manufacturers seem to think there is no market for a sporty rim that lasts more than five minutes.....

Maybe we should email Mavic (with pictures of exploded rims?) stating we deserve better, and if they (Mavic) produce a better product they could use this as a marketing tool and obtain all sales!
Top

ZAC2000 measurements would be interesting too...

Bearing in mind I'm pretty religious about cleaning aluminium/grit out of brake pads....

The brand new Ryde ZAC 2000 rim ( 26") rim width varied between 1.9mm and 1.7mm. I was surprised by the variation but it does have a machined braking surface (pic) so I guess slight variations in the extrusion process cause different amounts to be machined off?

It is a 19mm wide cheap utility rim (590g in 700c) so maybe not exacly what you are looking for but the front Zac 2000 rim that is on my old ride to work bike has probably done around 9000 muddy (but flat) miles...and unlike you I almost never clean my brake pads..just replace them!!

I have moved to a disc brake bike now for my towpath commute... I got sick of the brakes scraping.... 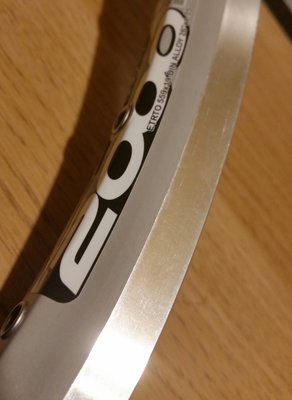 bgnukem wrote:
ZAC2000 measurements would be interesting too.

FWIW ZAC 2000 rims can vary depending on who made it and when. There are weinmann and rigida versions with this name and more than one of each too.

bgnukem wrote:
ZAC2000 measurements would be interesting too.

FWIW ZAC 2000 rims can vary depending on who made it and when. There are weinmann and rigida versions with this name and more than one of each too. 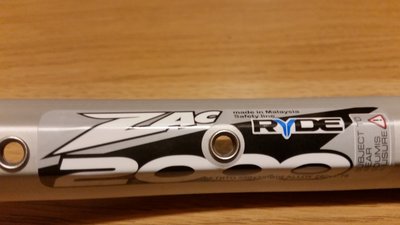 The other advantage of the ZAC rim design is the wear indicators.. the idea being you get some warning of impeding failure before it blows the inner tube out of the rim. 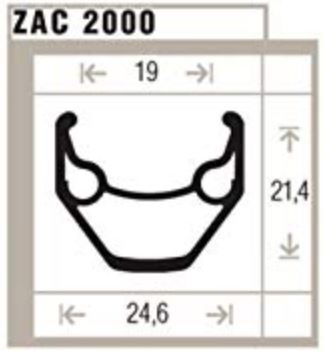