For discussions about bikes and equipment.
Post Reply
34 posts

Just checking over Moulton and found the rear rim catching on the LH brake block. Not much, just a catch.
I got my Red Spokey out and had a turn at the suspect area to fine a broken spoke!

Right at the nipple. Non-drive side. 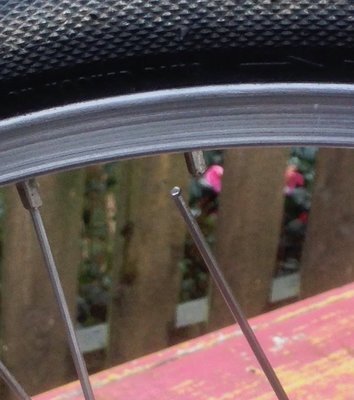 The spoke holes on the CR18 rims aren't canted or profiled or eyeletted so the spokes aren't in a straight line with their nipples. This must be the issue, so I'll be aware that more could go yet.

Luckily, I have some spares. Good job too.

you have some nipple kinks there and furthermore the spoke looks very slightly curved on the way towards the nipple. One possible cause of this is that the spokes have not been 'set' and stress-relieved during building and if so further breakages are likely.

FWIW in some rims it is possible to 'tweak' the eyelets/drillings to reduce nipple kinks. I suspect it may be possible with CR18, but I've not had cause to try as yet.

Looks like your rims are not directionally drilled. Sometimes you can improve things by using nipple washers, like the Sapim HM (or whatever they are called). Other times that doesn't work either.

To be honest I am more worried about your brake track, which seems seriously worn... have you measured the thickness?
Top

The spokes have been as stress-relieved as I could manage, but they are very hard and stiff being only six inches long hub to rim ........ and there are 36 of them in such a small wheel. Not much room for hands etc in there. If another one breaks, I'll have to disassemble the wheel and have a play with the nipple seats.

Couldn't get a 28h SA hub which would have been far better. They don't import them into EU in anything other than 36h despite making them in 28h and 32h.
http://www.sturmey-archer.com/en/produc ... rf3-silver

The rim looks worn, but it's not, though is wearing. Trick of the light with the photo. The rims (especially the rear) get very dirty being only 406 and I'm continually having to clean them. The rims have done 3,300miles only. Maybe another 3,000 and the rear will be shot.
Mick F. Cornwall
Top

re the hubshell issue; I have since discovered that there are different versions of the SRF3 hubshell; after a certain date they appear to have deleted the centre protrusion which will foul a CS-RF3 internal. I have both a late model SRF3 hubshell and a CS-RF3 internal to try but have not done so as yet. Anyway if my hunch is correct a 28H SRF3 hubshell or a Brompton BSR hubshell (always 28h) may work with your internal.

Re your spokes; 'setting' the spokes as they enter the nipples usually works OK and just requires that you push on each spoke with your thumbs. This is best done before stress-relief. In small wheels with short spokes you can stress relieve using a hide-faced mallet. If the spokes are short and thick enough (eg 90mm 13G) then a copper mallet is the best way. in either case you may have to straighten the spokes after stress-relief; they tend to bend in the middle if they see enough pressure to do what is required at the ends.

My view is that if the rim is drilled vertically, then the nipple has no choice but come out vertically, hence there is not much you can do about the spoke being "bent" at the thread. If the hole is large enough, then the nipple can move a few degrees and in that case having a smooth, cup-like washer helps setting the correct angle, but if the holes are too narrow, then the above stands.
Top

A tool could be used to set the pre nipple kink in the spoke if the spokes are too stiff to set by hand.

I've recently put felt sticky faces on pliers to prevent them marking the spokes when setting 13 elbows. I suppose a piece of hardwood with a narrow saw slot might also be useful for this.
Top

S2L wrote:My view is that if the rim is drilled vertically, then the nipple has no choice but come out vertically, hence there is not much you can do about the spoke being "bent" at the thread. If the hole is large enough, then the nipple can move a few degrees and in that case having a smooth, cup-like washer helps setting the correct angle, but if the holes are too narrow, then the above stands.

If the rim has eyelets it turns out that the eyelets usually have enough clearance on the OD that they can be set at a slight angle and this persists when the wheel is built. Eyeletless rims cam also be 'tweaked' but this does need material to be removed or deformed slightly. Claims are made for nipple shapes that favour slight articulation, but this isn't always going to work well enough by itself.


The idea of setting the spokes into the nipples is that the spoke then doesn't see such high cyclic bending loads when the tension (as it must) varies in service. If spokes (even with threads on them) see only uniaxial tension they have good fatigue properties. However if you superimpose even modest bending loads in addition then the fatigue life can plummet.

This isn't widely acknowedged but once the spokes are up near full tension, any given amount of effort in stress-relief and/or setting of spokes will be more effective; this is because there will be more yielding in overload and this will make for a better, more extensive distribution of favourable residual stresses.

I shouldn't worry too much about the spokes because it looks as if the rim itself is getting pretty worn and thin?
Top

PDQ Mobile wrote:I shouldn't worry too much about the spokes because it looks as if the rim itself is getting pretty worn and thin?

It will wear quickly, as I've suggested. It's absolutely fine at the moment, but maybe half-way through its life.
Done 3,300miles and possibly only 3,000miles left.
Heavy on the brakes round here.

Brucey:
I tried a Brompton 28h hubshell. Bought one from SJS but after seeing inside it and offering up my internals, it wouldn't fit, so I returned it.

Actually, we were in the SJS shop in Bridgwater when I returned it, and at the same time bought the CR18 rims.
Mick F. Cornwall
Top

PDQ Mobile wrote:I shouldn't worry too much about the spokes because it looks as if the rim itself is getting pretty worn and thin?

You do not need to replace the spokes when replacing a rim if they are effectively stress relieved. Obviously since some have failed it might be sensible in this case. Since the rim has some wear left I would probably try to set the spoke path better prior to the nipple and then see if there are any further breakages.
Top

Mick F wrote:Just checking over Moulton and found the rear rim catching on the LH brake block. Not much, just a catch.
I got my Red Spokey out and had a turn at the suspect area to fine a broken spoke!...

Broken spokes may happen, it's not the end of the world unless it happens frequently.
On small wheels you almost always have an unfavourable angle of the nipple hole in the rim, that is one of the reasons why you won't do a high number of spoke crossing, 2x being the most used.
I really like what Brompton has done to overcome this geometric limit, they've chosen a rim with a thick nipple seat and they countersunk the hole from the inside to match the spoke angle. This simple thing is pretty good on the field, as broken spokes on new Bromptons are very rare now.
Mavic and Campagnolo (the former, in a very noticeable way) do apply the same concept on some of their top-end road wheels, sometimes referred as "4-D drilling" because the nipple hole is aligned not only left/right but also fore/aft.
IIRC, the now Moultons use a 20" (406) rim size, for which I cannot remember a manufacturer that will apply this concept. For sure, I would not recommend to use long nipples, rather using the 12mm Sapim ones which can lean to a better angle compared to the DT Swiss ones. And certainly, the spoke length must be right: and you want the spoke to fill the whole of the nipple: short spokes will cause a fracture where the spoke ends in the nipple.
It is by riding a bicycle that you learn the contours of a country best,
since you have to sweat up the hills and coast down them.
Thus you remember them as they actually are...
Top

Both my wheels are 2x Perhaps they should be 1x for better nipple alignment, but that wouldn't be so good for the hub flanges.
Mick F. Cornwall
Top

Both my wheels are 2x Perhaps they should be 1x for better nipple alignment, but that wouldn't be so good for the hub flanges.

The tension you will use on a small wheel is likely to be very low, when compared to bigger wheels, so unlikely to cause issues to the flange, even in 1x constructions
Top