by backnotes
Hello,
I am trying to replace the worn / sloppy rod braking system on an old Raleigh. I am stumped removing the pivot lever under the bottom bracket.

I have cleaned out 50 years of dirt, but I can't get the screw to budge at all, and am wary of (further) destroying the slot if I try too hard. Picture below: 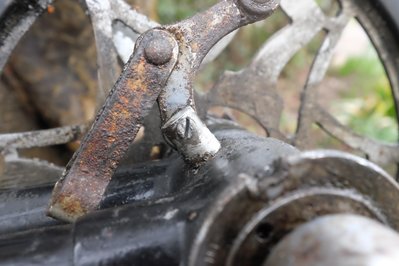 What's the rcommended way to try and remove this?

Alternatively, does anyone know if the "stump" that comes out of the bottom bracket shell is brazed in, or if it unscrews?

Thanks for any ideas or pointers to the previous thread I can't immediately find that answers this. I can replace everything else and remove a lot of the play, but it would be better to sort this bit out as well.

by MikeF
Have you used Plusgas or some other releasing fluid as well as clean off the dirt?

by NATURAL ANKLING
Hi,
I think the last time I looked at one of those was when I first rode a bicycle

When you try to budge screws after a good soak in penetration oil, also if any thread is exposed clean it of rust, turn it one way then the other, if it moves keep it up increasing the movement back and forth, reapply fluid and go again.
You could grind a screwdriver blade with more parallel sides so it does not slip out so easy.

by Brucey
I think the post will either be screwed or riveted in to the BB shell, but it isn't difficult to see which once you open the BB up.

Rod brakes are pretty basic pieces of engineering and you should expect to use pretty basic engineering techniques to address them. FWIW unless they are spectacularly worn or cracked I would just clean up/straighten the parts you have, if this is a bike that you actually want to use (rather than just look shiny). A bit of slop in those joints won't affect the braking in the slightest (most of them were sloppy from new), and since those parts get covered in crud very easily, 'new' parts don't stay 'new' for long anyway. Not that anyone is going to see them either....

I dunno what your plans are exactly but whilst you can buy new rod brake parts, most of them are proper rubbish and are best avoided.

by robc02
Try all of the above first, but if you do break something don't worry - they are mainly bits of mild steel rod and plate and it is easy to make replacement parts with only basic tools.

by MikeF
Also when you do sort things out it might be worth coating everything with Waxoyl. That will add some protection.

by backnotes
Thanks for all these helpful replies! I have tried PlusGas but will persevere with repeat treatments, and I like the idea of grinding a screwdriver blade so it is less likely to jump out.

The bike is for shopping and being left outside in all weathers rather than looking shiny or restored. I realise that rod brakes are going to be a bit sloppy with lots of play at the best of times but these had been mangled by the back wheel turning around in the dropouts, coming across and destroying the back brake in the spokes and it was never the same again. The springs on the handlebars had also grown tired so they no longer released the brakes from the rim.

It's not a sensible bike at all but I am quite fond of it. I suppose I could replace it with one with modern innovations like caliper brakes and experience the novelty of being able to stop in the rain.

by iandusud
If you have one I would suggest heating the offending part with a blow torch til it glows red and let it cool. The expansion and contraction should release the seized up thread. You will still need a good fitting screwdriver to get it moving.

by Brucey
if this is a bike for riding (rather than looking at), one thing you could do is to install a hub brake and to work it using the rod linkage. There are bikes from manufacturers like gazelle which have brakes that work this way.

FWIW if it is damaged, I'd probably weld-repair the linkage in situ rather than needlessly struggle to remove it.

NB part of the return spring arrangement in rod brakes is that the guide rods are angled and slide through the chainstay guides. If this part of the brake is damaged or not springy enough the brake won't release properly. The spring at the handlebar end only provides part of the force.

You can usefully add to the return spring force by adding a spring to the linkage under the BB. This keeps the linkage joints under a little tension at all times, which means that they rattle around less as the bike is being ridden. It is very often the rattling around which wears the joints, not the use of the brake per se.