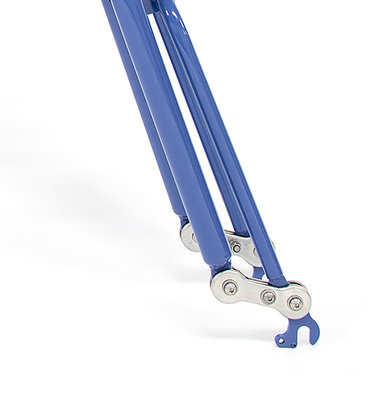 The info I've read, is that the linkages shouldn't be lubricated. I've found that they're better with a film of grease on the nylon washers.
The securing bolts are tightened/loosened to alter the damping dynamics, and I reckon I have mine right (for me).

The linkages need to be serviced, and I've done it twice so far in the three years I've owned the bike.
How?

I devised a system using the back door frame and a scissor jack to compress the suspension spring to allow the linkages to be removed and replaced.

Next time, I used a series of big thick tie-wraps and a bottle screw do do it.

What it needs is a proper special tool. Does such a thing exist?
Mick F. Cornwall
Top

IIRC you can compress the front suspension (by leaning on the bike) and then tie stout cord higher up, looping down under the sprung part of the fork.

I use a ratcheting strap through the stirrup and over the end of the head tube.

For cleaning the washers I've never used anything other than soap and water with a toothbrush. They are called friction dampening washers so I assume oily lubrication will have the opposite effect from that intended... plus that was the advice in the maintenance sheet from the factory.
Top

As for lubing, I know what the instructions are, but when I first looked at mine - untouched since brand new - guess what?
Grease in there.

I cleaned it out, and then rode the bike and the springiness had gone only to be replaced by "stiction". I tried loosening off the adjustments, but it wasn't very good as there was nothing between stuck and bouncy, so I did it again with grease, and all was fine .............. and still is, just like it was with grease from brand new.

I just wonder what they use to compress the springs in the factory. I'll bet it's not a back door frame and scissor jack, tie-wraps and a bottle screw, or even ratchet straps. It needs an engineering solution, not a Heath Robinson one.
Mick F. Cornwall
Top

if there were a special tool you can be sure that they would sell it at some exorbitant price.

What you dismissively refer to as 'heath robinson' works perfectly.

Beauty is as beauty does and all that.

Brucey wrote:if there were a special tool you can be sure that they would sell it at some exorbitant price.
What you dismissively refer to as 'heath robinson' works perfectly.

If a special tool exists, it can be reproduced in a non-exorbitant way.
Yes, I can do the spring compression idea in a variety of ways. Done it twice so far, and I'm looking for a better method than the two I've used.

The door frame and scissor jack was the best out of the two, but a compression system on a sort of frame and jig fitting in the dropouts and the headset would be better perhaps.

What do they use in the factory?
Can it be reproduced?

The top end of the spring, is anchored by a stud passing through the steerer. If that was "adjustable" or gently removable, the spring could be released from the top rather than the bottom end squeezing the spring and needing a compressor tool system ...... Heath Robinson or otherwise.
Mick F. Cornwall
Top

I had a thunk, and considered that simple is best.

What I've done, and envisaged before, was to remove the whole shebang out of the front of the frame so the dog could see the rabbit and I could get the whole fork assembly into the workshop.

What Brucey said was ringing in my tiny brain. I leant heavily on the top of the handlebars with my manly chest nearly lifting my feet off the ground. Meanwhile, I took some tie-wraps and passed them under the sprung fork crown and as I leant downwards, I pulled on the tie-wraps. Mine weren't quite long enough with the suspension relaxed, so need two in series. I used two pairs either side of the suspension fork and through the front latices of the frame.

Then, for ease (but not necessarily required) I removed the front wheel. The suspension linkages came off easily as the suspension was compressed nicely. Clean-up, then re-grease, then reassemble.

I would still like some device for holding the compression rather than straps, jacks, or tie-wraps. I wonder if I could devise a clip/hook thingy, so when you manually compress, you fit the clip/hook. Recompress to release.

Bouncing the front on the ground told me that the "feel" was just about right. I never travel without tools, so any minor adjustments can be done on the fly.

Self explaining photos, by was of illustration. 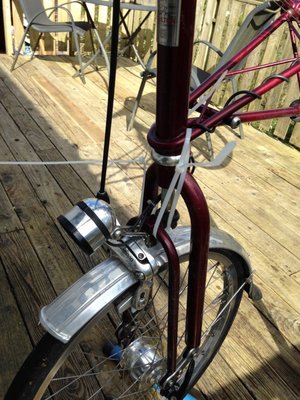 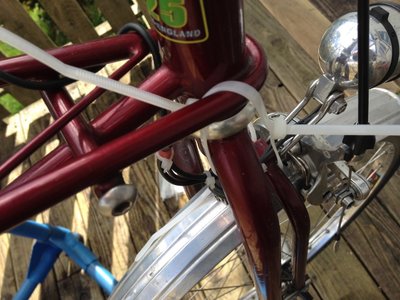 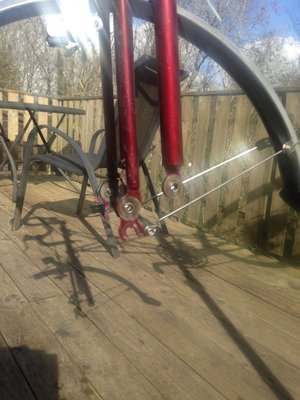 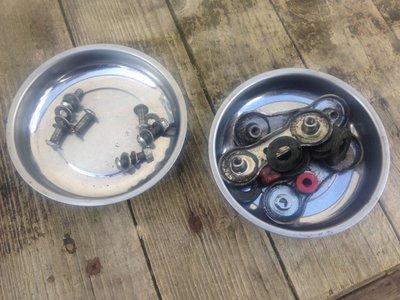 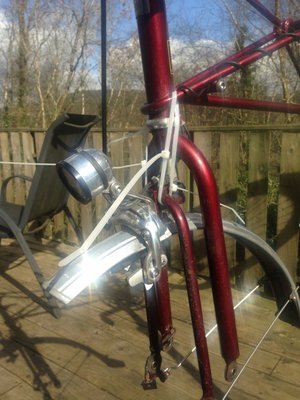 Chucking it down and it's blowing a gale out there today, so put my brain in gear to see what I could create in the kitchen!
Moulton upside down on the kitchen table.

I have a coil of tough wire, the sort you build fences with. Also some lengths of rubber tubing, and a SS bottle screw the sort you could get from a yacht chandler for rigging.

Put this lot together and by hooking over the wire suitably cut to length and bent to fit, I could winch the suspension easily enough. The wire needs rubbing down and filing off the sharp ends yet, but the idea works beautifully and very very easily. One loop over the stem, and the other loop over the suspended fork just behind the brake. 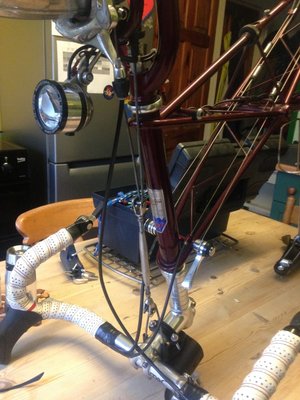 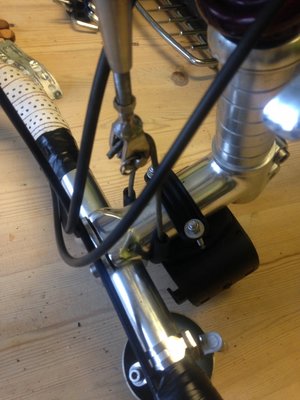 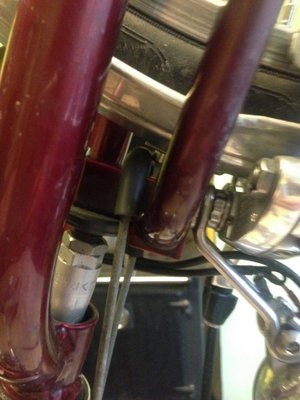 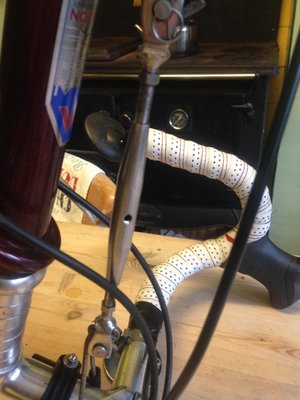 Well done Mick F!! You could have put something on the table to protect it though! Also I couldn't see your stash of Hobgoblin and Old Speckled Hen!

They say 'Do not grease or lubricate any part of the leading link assembly. '
Top

Mick F wrote:[snip]I'll bet it's not a back door frame and scissor jack, tie-wraps and a bottle screw, or even ratchet straps. It needs an engineering solution, not a Heath Robinson one.

You're in the Heath Robinson Appreciation Society Forum, CTC Chapter, fancy bespoke tools are right out.

Why would greasing be a bad idea? Does it adversely affect nylon bushings? Or is it that it might collect dirt and lead to wear? The disassembled parts resemble derailleur arm parts (but bigger), so this could affect that component too.
Top

They say 'Do not grease or lubricate any part of the leading link assembly. '

Like MickF says, without grease it’s either bouncy-bouncy or coggy stiction. Just a smear was all I ever used on my AM7. It was still never as good for me as my Mk 1 F frame. I sold my AM in he end.
Top

They say 'Do not grease or lubricate any part of the leading link assembly. '

Read it yonks back.
Forget it as far as I'm concerned.

When I first pulled mine apart soon after brand new .......... to see how it all worked .............. mine were greased. Nicely greased too.
If Moulton/Pashley grease them on assembly in the factory, then that's good enough for me.

I tried to do it as per the Moultonbuzz instructions, and it was rubbish. I suggest that Moulton/Pashley have their own ideas, and those ideas fit in with my ideas.

pwa wrote:Why would greasing be a bad idea? Does it adversely affect nylon bushings?

Who are these MoultonBuzz people?
Not Moulton/Pashley I'll wager.
Mick F. Cornwall
Top

Maybe Moulton are worried that a numpty pulling that lot apart and putting it back together might cock it up and end up face planting.
Top
Post Reply
30 posts